Robert H Olley
I have been working in research for 36 years now.  As the millennium turned, and our department found itself being starved of staff like the Hodja’s Donkey, I found myself being called upon to assume some small teaching roles.  I found two incompatible things: one, that I really enjoy teaching, even more than research; two, that there is so much physics that I never had learned properly.

On getting into discussion with one of the students about thermodynamics, he recommended to me A Hot Story by G. Venkataraman.  This is one of the Vignettes in Physics, an excellent series of books (listed here) by this author from India.  These books have greatly helped to dispel the clouds of suffocating incomprehension that had, in my mind, surrounded words such as “Hamiltonian” and “canonical” since I first encountered them as a young man.)

One of these books, The Breakthrough, deals with quantum mechanics, and brings to light the foundations on which the subject is built.  One of these is THE PRINCIPLE OF LEAST ACTION.  Students should love a principle with a name like that!

A few years ago, on http:/www.microscopy.com there appeared the question: “why does a light beam change direction when it strikes a medium with greater refractive index than the medium in which it is”.  The discussion started to ramify into quantum, photons, and similar.  There is much more to this question than is apparent at first sight.  Most physics students tend to be dropped into the Quantum Quagmire without being shown how it relates to earlier stuff.  This prompted me to write the first version of this historical vignette.

Before we embark in our time capsule, let me explain what action is.  I first encountered it in reading The Nature of the Physical World by A. S. Eddington (Kessinger Publishing, 2005; ISBN-10: 1417907185), where in a series of lectures he explains to a lay audience in 1927 the meaning of these wonderful new theories which had started to turn the world inside out since 1905.  One Amazon reviewer says:

It reveals the deep meaning behind the mathematical symbols and equations in modern physics. It’s incomparable in this regard.

This book started me on physics, way way back. I wish it were in print again.

Here I learned of action, and that it comes in units of dimension energy × time, and every quantum change in nature comes with the same amount of action, value equal to Planck’s constant.  This is the same whether it refers to on one hand a high-energy gamma ray from a gamma-ray burster or decay of an atomic nucleus, or on the other a very low energy photon from the cosmic microwave background or the even lower energy radiation from a long-wave radio transmitter.  And this unit of action is the “cent” in which all physical transactions in the universe are carried out.

So politicians please note: any “quantum changes” you make are no bigger than anybody else’s!  With that, let us now embark.

In the classical world, Heron of Alexandria (aka Hero) was known as a great practical teacher in matters of mechanical devices and geometry.  He showed that light, travelling from one point to another by a reflection from a plane mirror, always takes the shortest possible path.

What Heron did for reflection, Fermat did for refraction.  He took Huygens’s view that light should travel more slowly in a denser medium, and reformulated the principle by postulating that the light travels in a path that takes the least time!

In hindsight, if the c (the speed of light in a vacuum) is constant then Heron and Fermat are in complete agreement.

Based on his reasoning, he was able to deduce both the law of reflection and Snell’s law

Unfortunately, this was not accepted.  The Continentals believed that light travelled faster in a denser medium.  This is the same as in Newton’s corpuscular theory of light, but that came later.  Rather, it followed from the philosophical conclusions of Descartes.

The first formulation of the principle of least action was by Pierre de Maupertuis, called with tongue in cheek the Man who Flattened the Earth, from his participation in one of two French expeditions which determined that our planet is slightly flattened at the poles, as predicted by Newton.  He developed the principle first in optics, to square the calculations of Fermat with the generally held belief that light travels faster in glass than air.  This worked, so he extended it to mechanics.

He enunciated “In all changes that take place in the universe, the sum of products of the speed of each body and the distance it moves is the least possible.”

He didn’t give it a very solid math background, though, but what did for him was giving a theological rider “Action is minimized through the Wisdom of God”.  This led Voltaire to satirize him, driving him out of Paris, and he died on the way to Berlin.

Euler picked up the principle and gave it sound mathematics, but being the generous man that he was, he ascribed the principle itself to Maupertuis.  In 1755 the young Lagrange wrote to Euler with a much slicker (in the best sense) mathematical formulation, and Euler dropped his own formulation and took up Lagrange’s.  From this we get LAGRANGIAN mechanics.

(The principle of least action does not override Newtonian Mechanics, but it a more mathematically sophisticated version.  Another version, also from the same century, is D’Alembert’s Principle, useful to engineers in solving systems by the method of VIRTUAL WORK.  Students should love that also!)  D’Alembert had an interesting life, starting with being left at a church door as an infant. 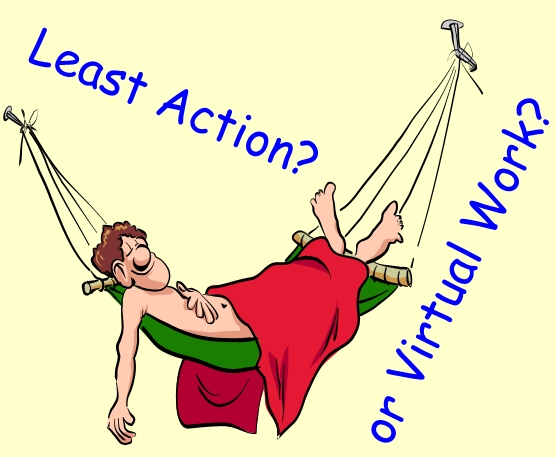 In the early 1800’s Thomas Young demonstrated the wave nature of light, and the corpuscular theory was swept under the carpet.

Around 1830 William Rowan Hamilton was developing a more advanced treatment of optics based on the wave formulation.  He extended this to mechanics, and in 1834–5 he published two papers on which it is possible to base all of mechanics and most of classical physics.  In 1857 the English mathematician Arthur Cayley gave this formulation the name HAMILTONIAN.  It is the ancestor of the Hamiltonian in quantum mechanics.

Louis de Broglie is famous among physicists for giving us the first wave theory of the electron in his doctoral thesis in 1924 (which the examiners could not understand; it was Einstein who persuaded them to award him the doctorate.)  In his memoirs he states

“The theory of light was suffering from a strange illness, which took the form of an antagonistic dualism between the waves of Fresnel and Maxwell, one the one hand, and photons on the other”.  … “Thus appeared the idea of extending to matter the corpuscles-waves duality which was essential to light”.  * * * * * “The equation which expresses that the motion of an electron is quantised has … the following significance –

that Maupertuis’ integral ∫mvds taken along the closed trajectory is equal to an integral multiple of [Planck’s] constant h.”

Even so, the principle of least action was largely overlooked in teaching, until rescued by Feynman. He developed the “many paths” version of quantum mechanics, a third formulation mathematically equivalent those of Schrödinger and Heisenberg.

So, if you want a slice of the Least Action, I recommend that you go to http://eftaylor.com/leastaction.html from which you can download an Action Summary PDF.  This starts with a dramatized introduction where the main actors from Fermat to Feynman come and put the case for L.A.

Acknowledgements also to Dr Phil Womble of Western Kentucky University, whose online lecture notes first gave me a “fast track” through all this history.
Beamlines
More Articles All Articles
About