Sir Archibald Henry Bodkin, KCB (1862–1957) was our British Director of Public Prosecutions from 1920 to 1930.  He particularly took a stand against the publication of what he saw as ‘obscene’ literature.

In the 1920s he tried to ban Ulysses by James Joyce and even threatened in 1922 to prosecute the academic F. R. Leavis if he mentioned it in his lectures at Cambridge University since it contained “a great deal of unmitigated filth and obscenity”.  On December 29, 1922 he banned the book, saying “As might be supposed I have not had the time, nor may I add the inclination to read through this book.  I have, however, read pages 690 to 732.”  He also stated he could not make “head nor tail” of the book.  The British ban remained until 1936.

For those unfamiliar with this expression, according to The Free Dictionary, Neither head nor tail means
neither beginning nor end; neither this thing nor that; nothing distinct or definite; – a phrase used in speaking of what is indefinite or confused; as, “they made neither head nor tail of the matter”

However, if one wants to find a most graphic application of this phrase, there is none finer to be found anywhere than the developmental biology of the echinoderms, to wit the starfish and their relatives.

Among the unsung heroes of 19th century zoology, there must have been many microscopists who strained their eyes studying the larvae of marine organisms.  Many molluscs and crustaceans in particular were found to go through one or more episodes of metamorphosis from the newly hatched larva to their adult forms.  But out of all of these, the echinoderms must, I think, take the group prize.

Here, for example, are some stages in the development of the Crown of Thorns Starfish, that causes so much damage on coral reefs. 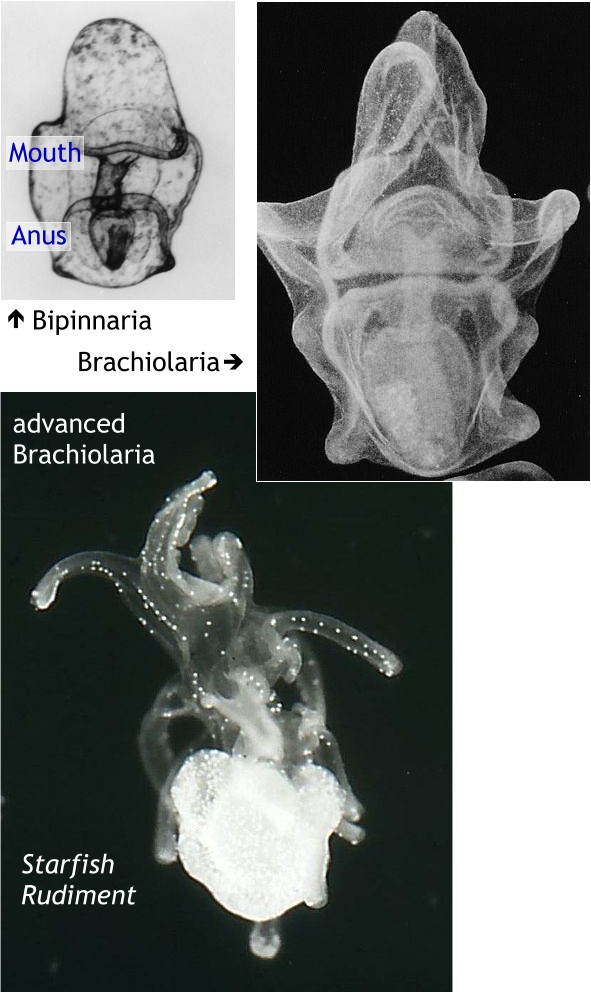 The accompanying text, from Wikipedia: «By Day 1 the embryo has hatched as a ciliated gastrula stage.  By Day 2 the gut is complete and the larva is now known as a bipinnaria (top left).  It has ciliated bands along the body and uses these to swim and filter feed on microscopic particles, particularly unicellular green flagellates (phytoplankton).  By Day 5 it is an early brachiolaria larva (top right). The arms of the bipinnaria have further elongated, there are two stump-like projections in the anterior (not evident in the photograph) and structures are developing within the posterior of the larva. In the late brachiolaria larva (Day 11)(bottom) the larval arms are elongate and there are three distinctive arms at the anterior with small structures on their inner surfaces.  To this stage the larva has been virtually transparent, but the posterior section is now opaque with the initial development of a starfish.  The late brachiolaria is 1-1.5 mm. It tends to sink to the bottom and test the substrate with its brachiolar arms, including flexing the anterior body to orient the brachiolar arms against the substrate.»

So far, so good.  Other creatures also settle down with their front ends attached.  Barnacles are crustaceans, and their life-cycle has been described thus “A barnacle has been described as an animal that sits on its head and kicks food into its mouth with its feet.”  The larvae of many tunicates (sea squirts) also attach themselves by adhesive spots on their front end and absorb their cerebral ganglia.  As for our starfish:

«The late brachiolaria search substrates with their arms and, when offered a choice of substrates, tend to settle on coralline algae, which they will subsequently feed on. In the classic pattern for echinoderms, the bilaterally symmetrical larva is replaced by a pentamerously symmetrical stage at metamorphosis, with the latter’s body axis bearing no relationship to that of the larva. Thus the newly metamorphosed starfish are five-armed and are 0.4–1 mm diameter.»

This is a somewhat limited account of the process.  Referring this time to Living Invertebrates:

«The final stages of metamorphosis are completed rather rapidly.  A new mouth breaks through on the larval left side through the middle of the ring canal, while a new anus opens on the larval right side, thus producing an adult axis at right angles to the larval axis.  The 5 radial canals grow out and develop tube feet, the body takes on the adult shape, and the young sea star crawls away to a new life.»

The starfish, however, form but one of the five extant groups of echinoderms.  Here are all five, presented in a cladogram from University of California, Berkeley: 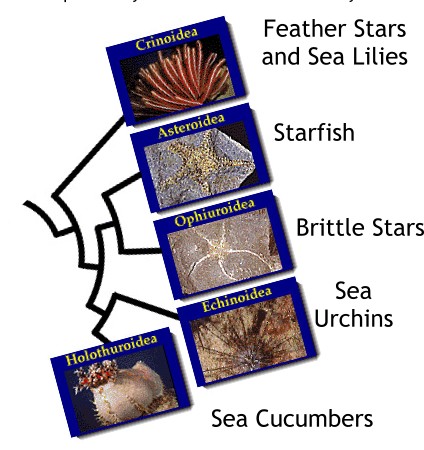 At the top we see the Crinoidea, or sea lilies.  These are the Pelmatozoa, or stalked animals, even though the feather stars during their development leave their stalk behind and wander off freely.

The other four classes form the Eleutherozoa, or free-living animals.  Working out the relationship between the four classes seemed well-nigh impossible, until molecular biology came along and allowed them to be grouped in two sets of two, as in the cladogram.  Easy enough, you may think, until their larval development is compared.

Here is part of a diagram from Echinoderms by David Nichols (1962).  It shows the larval development of the four classes, but I have picked out the starfish or Asteroidea (left) and the sea cucumbers or Holothuroidea (right). 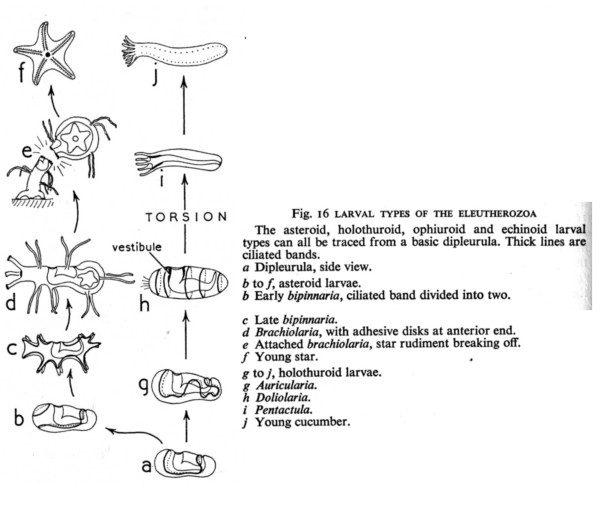 At e in the left-hand column, we see the star rudiment with the developing starfish mouth breaking off, and leaving behind the larval front end with its larval mouth (or else the larval body may be absorbed.)  However, with the sea cucumber, there is a bit or torsion of the internal organs, but it keeps its larval mouth, even though the internal vessels of the little animal are growing into the five-fold symmetrical pattern in a manner quite similar to the starfish.  But most of the adult sea cucumber’s body is developed from larval tissue.

To make matters worse, the other two classes, namely brittle stars, develop via pluteus larvae, (pluteus meaning “easel”) which have extra arms compared to the other two.  Here is an example of an echinopluteus larva of a sea urchin.

Here is a table summarizing these differences:

Seeing how these features fit in with the molecular picture shows that trying to work out a consistent evolutionary plan from the larval morphological development could lead nowhere, almost as if it had been designed with the specific purpose of driving evolutionary developmental biologists mad.

Many “primitive” creatures like cnidarians (jellyfish, sea anemones, etc.) are radial, while a majority “higher” creatures are bilateral, with a left and right side, a top and a bottom, and a front-to-rear axis.  Sometimes this symmetry is broken, as in snails with their spiral shells, but in development they start out bilateral, and twist, but some organs on one side may not develop.

The development of larval forms of echinoderms (starfishes, sea urchins, etc) starts out bilateral, and the radial form develops by metamorphosis.  In the later 19th century there developed the theory of recapitulation, also called the biogenetic law or embryological parallelism— often expressed in Ernst Haeckel’s phrase as “ontogeny recapitulates phylogeny.  This now largely discredited biological hypothesis states that in developing from embryo to adult, animals go through stages resembling or representing successive stages in the evolution of their remote ancestors.  «Embryos do reflect the course of evolution, but that course is far more intricate and quirky than Haeckel claimed.  Different parts of the same embryo can even evolve in different directions» (University of California Museum of Paleontology).

Even so, in echinoderms the course of larval development is overwhelmingly strong that the remote ancestor of the echinoderms was bilateral.

The early Cambrian has yielded many strangely shaped echinoderms, which look as if they were half-way between a bilateral and a radial state.  Now, within the last year or so, the two ends of the sequence between bilateral and pentaradial have been discovered in the fossil record.

The first thing that the Natural History Museum in London brings to mind is most probably dinosaurs, though as I walked round the gallery with a Mesozoic scene I was looking rather at the vegetation.  But for years there has been a very active group, headed by Dr Andrew Smith, working on echinoderm fossils from all over the world, who have discovered two new creatures at each end of the development.

First, from Spain, comes this bilateral creature Ctenoimbricata spinosa, published in 2012 [1].  A bilateral echinoderm Courtessolea moncereti was known since 1999 from a rather damaged specimen, but a more complete one has also turned up.  But Ctenoimbricata also seems to represent a more primitive version of this body plan. 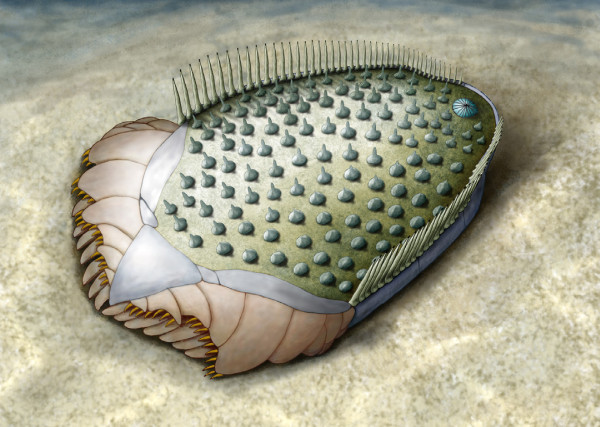 Secondly, this year we have the (so far) earliest known pentaradial echinoderm, Helicocystis moroccoensis (from guess where!) [2] 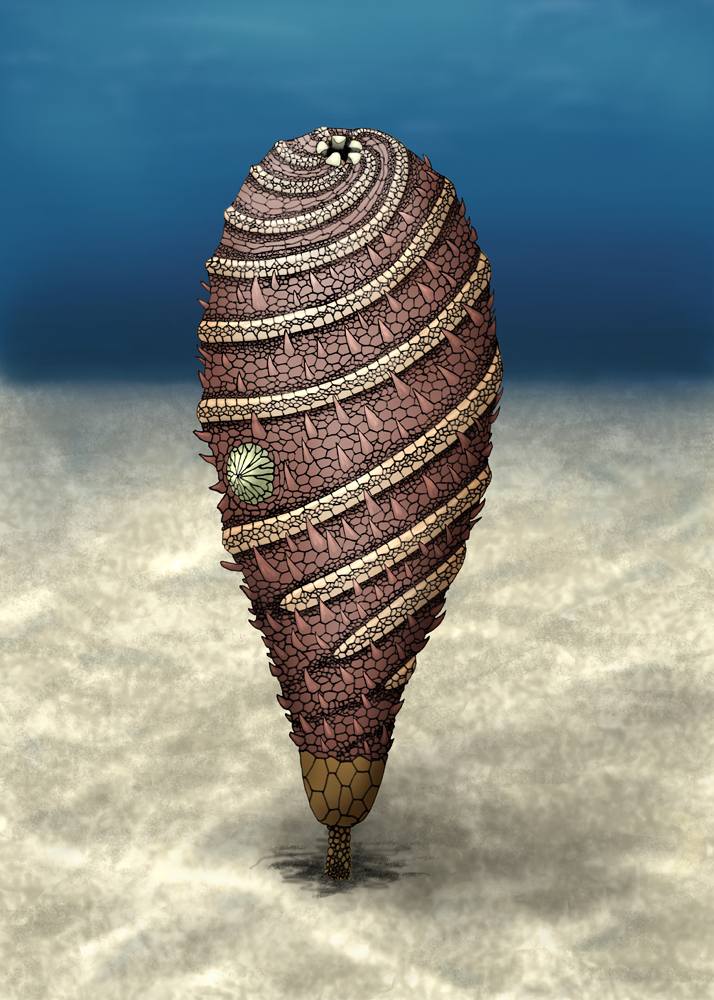 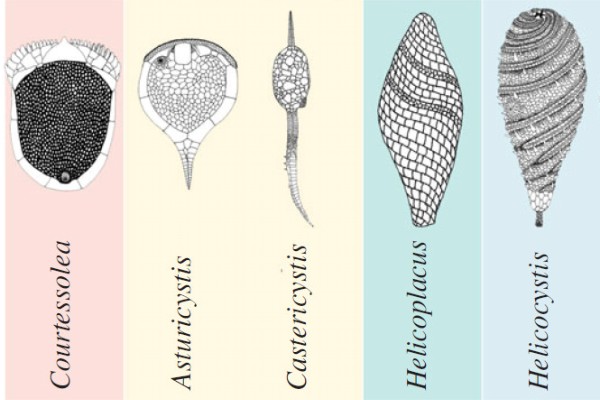 Furthermore, the new pentaradial specimen seems to sit nicely as an ancestral form.  So, what shall we call this creature?  Let us give it  fine sounding German name:

But whatever you call it, I have complete sympathy for anyone who says they can’t make head nor tail of starfish!