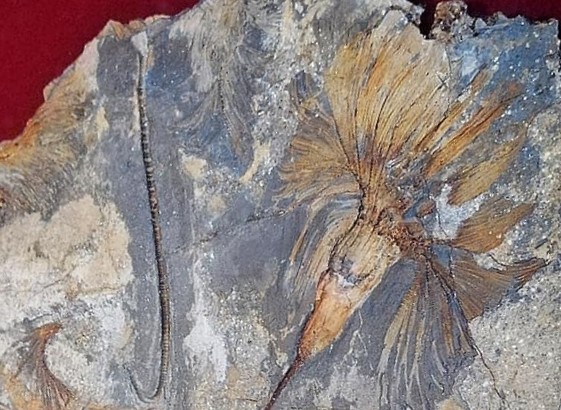 This exceptionally well-preserved crinoid, Delgadocrinus oportovinum, was found on October 11, 1905, by Nery Delgado during his work mapping the geology and paleontology of Portugal.

Crinoids are marine animals in the class Crinoidea. They are echinoderms related to starfish, sea urchins, sea cucumbers and brittle stars. Adult crinoids have a mouth located on the upper surface surrounded by feeding arms. These have feathery pinnules and are spread wide to gather planktonic particles from the water.

Delgado's find resulted in the creation of a new family, Delgadocrinoinidae, a new genus and a new species. Ausich et al. published on New and Revised Occurrences of Ordovician Crinoids from Southwestern Europe in the Journal of Paleontology, November 2007. In their work, they honour Delgado. His find was the first record of an Ordovician crinoid from Portugal, Delgadocrinus oportovinum, marking it as the oldest known crinoid from the Iberian Peninsula (Arenigian/Oretanian boundary, early Darriwilian).

The team took a comprehensive look at the Ordovician crinoids of southwestern Europe, including taxa based on articulated crowns and stems. This summary incorporates new material, new localities, and a revision of some southwestern Europe occurrences and is well worth a read. The Type Specimen you see here is now housed in the Natural History Museum of Lisbon. Luis Lima shared a photo of his recent visit to their beautiful collections and kindly granted permission to share the photo here.