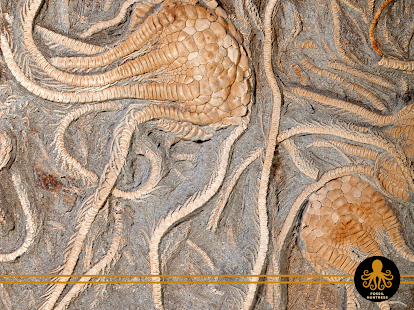 Crinoids are unusually beautiful and graceful members of the phylum Echinodermata. They resemble an underwater flower swaying in an ocean current. But make no mistake they are marine animals. Picture a flower with a mouth on the top surface that is surrounded by feeding arms. Awkwardly, add an anus right beside that mouth.

Crinoids with root-like anchors are called sea lilies. They have graceful stalks that grip the ocean floor. Those in deeper water have longish stalks up to 3.3 ft or a meter in length. Then there are other varieties that are free-swimming with only vestigial stalks. They make up the majority of this group and are commonly known as feather stars or comatulids.

Unlike the sea lilies, the feather stars can move about on tiny hook-like structures called cirri. It is these same cirri that allow crinoids to latch to surfaces on the seafloor. Like other echinoderms, crinoids have pentaradial symmetry. The aboral surface of the body is studded with plates of calcium carbonate, forming an endoskeleton similar to that in starfish and sea urchins.

These make the calyx somewhat cup-shaped, and there are few, if any, ossicles in the oral (upper) surface, an area we call the tegmen. It is divided into five ambulacral areas, including a deep groove from which the tube feet project, and five interambulacral areas between them.

Crinoids are alive and well today. They are also some of the oldest fossils on the planet. We have lovely fossil specimens dating back to the Ordovician — if one ignores the enigmatic Echmatocrinus of the Burgess Shale. And they can be quite plentiful. Crinoid fossils, and in particular disarticulated crinoid columnals, can be so abundant that they at times serve as the primary supporting clasts in sedimentary rocks.

The specimen you see here is a stunning example of Upper Cretaceous, Santonian age, Uintacrinus — named for Uinta Mountains of Utah. It shows a mortality plate known from Mancos Shale. These lovelies are best known from the Smoky Hills Niobrara Formation of central Kansas.