Robert H Olley
Not long ago, we acquired a range of inexpensive storage vessels, ideal for keeping leftovers in the fridge before they go into yours truly, the family dustbin.

Here is an example: the steel dish is covered by a tight-fitting plastic (presumably polyethylene) lid.  Or it was tight-fitting when we bought it, but some of these lids are now so tight-fitting that they won’t even go on at all, and one or two have split in the attempt to force them on. 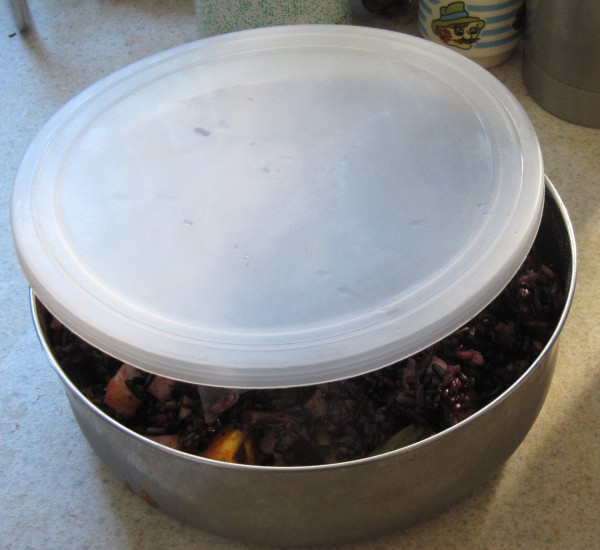 First instinct might be to blame the country of manufacture.  However, I think the problem lies in a lack of detailed knowledge of polymer properties.  The manufacturer has probably turned out a product that nicely matches specification, but is, like 99.99% of the world’s population, not familiar with the science of how plastics perform under ageing and wear & tear.

Plastics are a widely varied class of materials — if you want to ask “how varied”, I would reply “describe a typical mollusc”.  However, with polyethylene, we are dealing with a typical, archetypical semicrystalline thermoplastic. The second word is easy: it means one that you can melt and mould.  But the first word?

Some plastics, like polystyrene, are not crystalline at all.  Heat them up, and you get a sticky liquid, and as they cool, this sets into a hard glass.  But no crystals have been formed — just like ordinary window glass, the liquid becomes so stiff on cooling that it is effectively a solid.  It may look “crystal clear”, but there is not the regular atomic or molecular order found in common crystalline solids like table salt or granulated sugar.

Polyethylene, above 140°C, is a sticky, gooey, clear liquid.  Cool it by some tens of degrees, though, and it starts to crystallize.  The crystals start as tiny nuclei, and begin to grow.  There are generally lots of these nuclei, maybe 1000 to a cubic millimetre, and very soon the crystals have grown and are abutting on to each other.  They do not completely fill up space, though.  Polyethylene molecules are spaghetti like, and after a while in the remaining space the molecules are so tangled up together they cannot sort themselves out any further.  So instead of crystallizing into a hard solid, they form a rubbery sort of filler for the crystals that have already grown.  That is why polyethylene can have some of the stiffness of a solid and some of the flexibility of a rubber.  (Picture: transmission electron micrograph showing crystals in matrix) 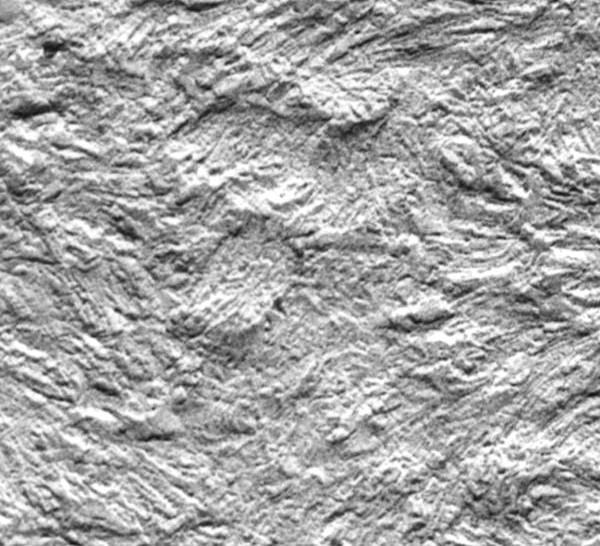 And now for the history of our plastic lid.  It would have started out as a sack of pellets from the polyethylene manufacturer, which would have been fed into some kind of hopper and then into a melting oven.  Here is how the volume of polyethylene increases as it is heated (data from Leo Mandelkern of Florida State University[1]). 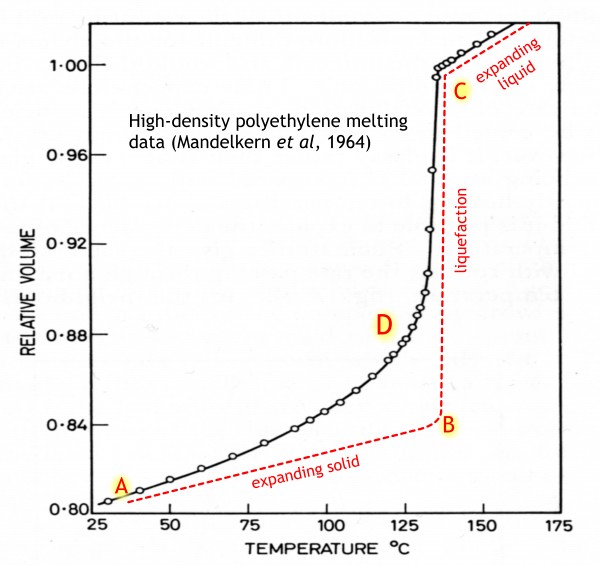 If it were a ‘simple’ solid, it would behave somewhat like the red curve.  From near room temperature at A, it would expand slowly, until near the melting point at B, when it would all turn into liquid with a much greater volume, and then continue expanding as a liquid, rather more quickly than it did as a solid.

But not real polyethylene (black curve).  The upward curvature at D shows that a proportion of the solid is gradually turning into liquid all the way up the melting curve, even though the final melt-out takes place over a range of a few degrees.  But even ten or twenty degrees before this, the plastic would have become softer, more bendy, and a bit sticky to the touch.

Now we have our molten polyethylene, and we rapidly inject it into the mould and cool it very quickly.  Speed is of the essence, in order to keep ‘cycle time’ down, out with one lid in with the next in the same mould.

The next graph shows how the volume of 1 gram of polyethylene (PE) is made up of its rubbery (or ‘amorphous’) and crystalline parts.  If we could cool it fast enough, in theory it would not crystallize at all, and would form a glass.  In practice, this is very difficult to achieve.  The only case I know of is where thin films of molten polyethylene have been catapulted into slushy nitrogen at –210°C (mere liquid nitrogen would not do: it would start to boil and an insulating film of bubbles would form on the polyethylene so that it could not cool fast enough.)  Even if one could achieve this with one’s bucket, it would crystallize as it warmed back up to room temperature.  But if one could achieve such a state, one’s gram of polyethylene would occupy nearly 1·2 cm3 of space (A). 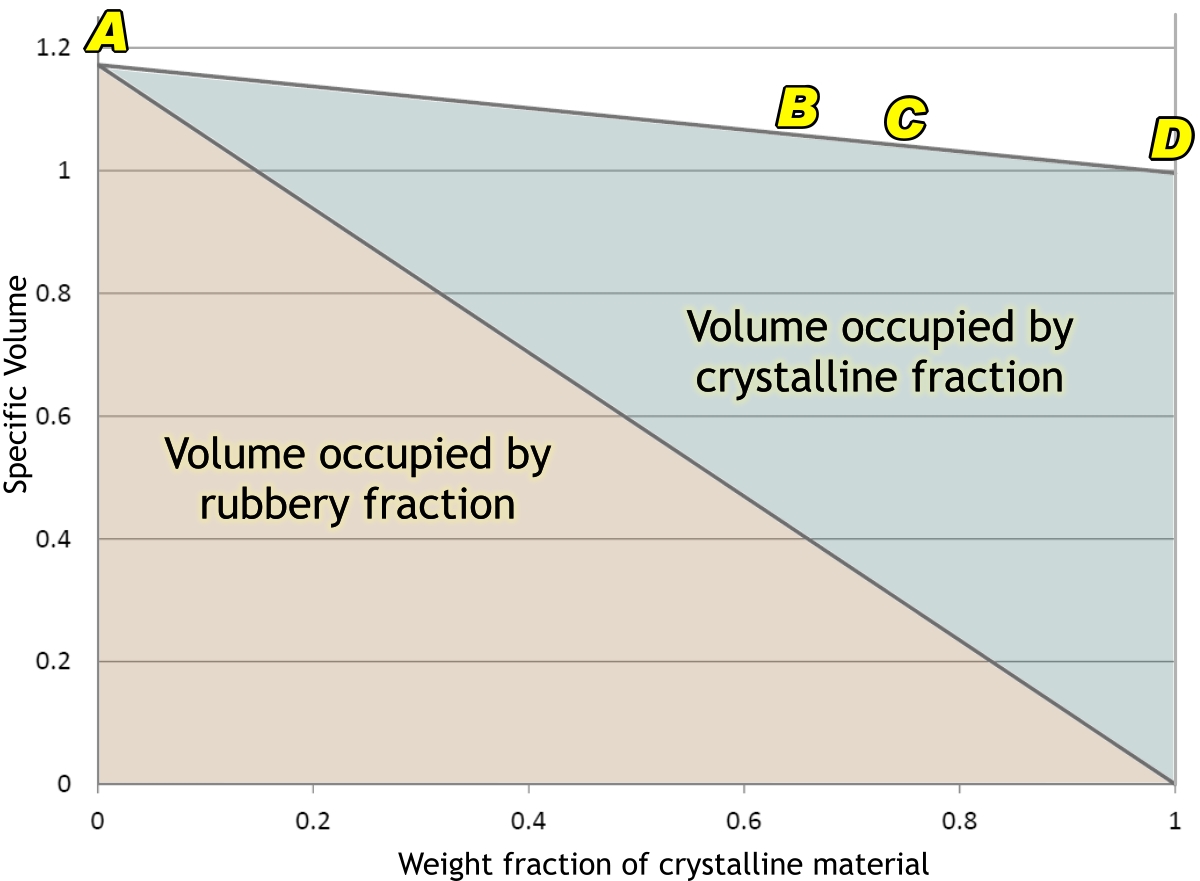 In our moulding process, though, it crystallizes, not all the way to D, but to something like B.  Our gram of PE now occupies about 1·06 cm3.  And there it would sit, quite happily, part of a well-formed nicely fitting lid, if only …

If only we did not do things like filling the container with hot food, and washing it up in really hot water.  The lid was, as said before, formed under very rapid cooling, and the plastic is far from being in anything like an ‘equilibrium’ state.  Heat it up again, and the crystalline material starts to melt slightly.  However, the non-crystalline part is now able to crystallize more slowly, and into something more like an ‘equilibrium’ state.  This means that the lid will transform into a more highly crystalline condition such as C in the diagram.

This means that our lid had shrunk, and it is more difficult to force it onto the steel dish.  Push too hard, and the rim of the lid may — and sometimes does — SNAP!


[1] Place to go if you’re looking for a Tallahassee Lassie?