Home > Environment > Between Death and Data

Oliver Knevitt
Labeling things with their carbon footprint is an idea that I didn't realise was new; in fact I thought it had been done already at Tesco's. Anyway, my ignorance aside, Vandenbergh et al have recommended them, writing in Nature Climate Change that

"A major barrier to improved energy efficiency in households seems to be a lack of understanding of the impacts of various actions and products,"
"Providing information would lower this barrier, allowing consumers to make more informed choices without substantial effort."
"The value of the label comes not from providing perfect information, but better information than the consumer has at present." 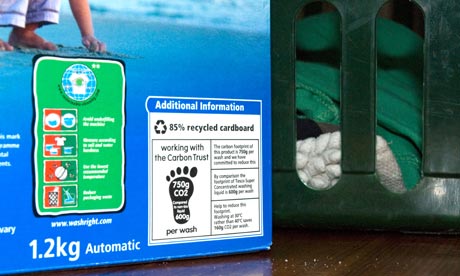 Nonetheless, if anyone does manage to find, read, and understand these things (which I suspect is a major barrier to their effectiveness) they might have a few surprises.

Milk: the UK uses twice as much energy per tonne of milk solids than NZ, even including the energy associated with transport from NZ to the UK.

Apples: Bizzarely, NZ is also more energy efficient in producing and delivering apples to the UK market than the UK is. Even when transport is added, NZ energy costs are approximately 60 per cent of those in the UK. Consequentially, the CO2 emissions per tonne of apples produced are also higher in the UK than in NZ, reflecting the higher energy use but also the lower emissions from NZ electricity generation.

Lamb: Even worse. The energy used in producing lamb in the UK is four times higher than the energy used by NZ lamb producers, even after including the energy used in transporting NZ lamb to the UK. So, NZ CO2 emissions are also considerably lower than those in the UK. But even then, a 100 gram portion of New Zealand lamb exported to Europe creates 1.9kg of CO2; about a five mile trip in a car.

Cumulatively, the cost of food over the year can add up; most people's yearly footprint is about 2 tonnes of CO2. To vaguely put this in context, 440kg (440,000g) of CO2 is equivalent to flying from London to Glasgow and back with 15-mile taxi rides to and from the airports. Or doing your laundry for a year.

I do wonder though, even when presented with these contrary statistics, I don't think that people would change their shopping behaviour. It just feels intrinsically more wasteful to ship stuff from New Zealand, and I don't think any cold hard figures will ever change that.