What can I say. This is one weird bastard. And it used to look even weirder,

The story is like this. At the turn of the last century, people started to find these strange dinner plate sized fossils that look superficially like ammonites,

But then, on closer inspection, they look uncannily like shark teeth... 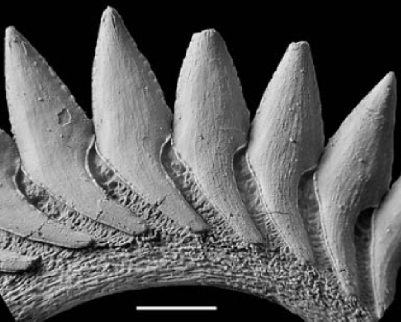 It became part of the life's work of a russian paleontologist named Andrzej P. Karpinski to reconstruct this beast, though he might have had more success by staging a "pin the whorl on the Helicoprion" at his son's birthday party. First of all, he tried it on the dorsal fin, like a windmill. He tried it on the tail, like a piglet. He even tried it on the tip of its nose, like some sort of evil elephant. A contemporary of his, a Russian paleoichthyologist called Dimitri Obruchev, deciding that a location in the lower jaw "would only prevent the fish from feeding", placed the whorl in the upper jaw, thinking that it could act as a shock absorber for the animal's head. 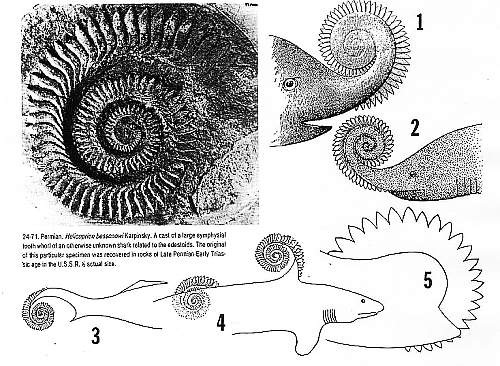 Today, however, we generally agree that the helical structure must have been part of the lower jaw, based on the skull of a relative, Ornithoprion. But then, we still have this gargantuan problem of how a reconstruct a shark that apparently had a 3 foot wide buzz saw for a lower jaw. Not only that, the growth of its teeth is hardly... shall we say... elegant. Because the teeth are so monumentally huge, and because they grow interlocked with one another, the teeth cannot be shed. Instead, the smaller and older teeth are shoved out and down as they grow, rather like an ingrown toenail, except on a huge scale. Nice.

We can get some clues about how it ate from the microwear on the teeth. Almost all the scratches on the surface of the teeth are directed radially inwards, suggesting that the biting was indeed applied between the jaws. So it was clearly used for biting, and not dredging through sediment, or whipping like spiderman either - both of which have been suggested.

There isn't really a consensus as to what Helicoprion looked like; the buzz saw gets placed around in different parts of the lower jaw every decade or so; right from the throat to the tip of the lower jaw. I would be foolish to say "it is now generally agreed" as to where it belongs, but, for me, the most plausible reconstruction has come from from a 2009 study of a new specimen from Kazakhstan. This has the buzz saw on the lower jaw only, encased in cartilage, and abutting against a tough platform on the upper jaw. 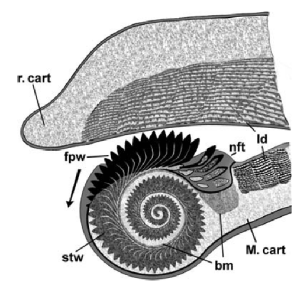 The best analogy that we have is with something like Grampus (Risso's dophin), which feeds on cephalopods,

It has concentrated its teeth at the tip of its lower jaw and reduced them in its upper jaw, which it uses for crushing things against. Perhaps, then, Helicoprion was a Mesozoic equivalent to Grampus, cruising through the ocean and hunting ammonites, which (as anyone who has visited Lyme Regis on the UK's Jurassic coast) were teeming in the oceans at the time. I wonder if there's a really neat transition to Helicoprion still buried in rocks that we're not seeing; one of ever increasing lower jaw "gadgets", with Helicoprion as a sort of comical end member and some of its relatives in a stem group, or whether the jaw is some sort of baggage related to the way it grows its teeth. That is, of course, unless we've completely got it wrong, which is always possible.