Oliver Knevitt
Here's a question. In many millions of years time, is it possible that future geologists - be they our distant descendants, or an alien race that has since conquered Earth - will be able to look at the sequence of rocks corresponding to the present period, and recognise the moment when humans became the dominant species on the planet? If so, what time will this horizon represent, and how will it be recognised?

This is the debate that is currently raging between stratigraphers worldwide. The concept is relatively simple - that humans have stuck their oars into so many natural processes that any sediments being deposited now will undoubtedly bear our signature. In which case, we, and future geologists - human or alien overlord otherwise - can distinguish the rocks deposited today from those deposited a few hundred thousand years ago, can determine them as being clearly of different ages, and can recognise today's rocks as "Anthropocene" age rocks, as opposed to Holocene aged rocks.

Whilst many people, (e.g. plenty of Nobel Laureates, Nature, National Geographic, me... ), are convinced, some geologists aren't convinced that we have enough of a pervasive effect on the Earth to be recognised, or even that we need to bother. I'll lay out the rationale, and you can decide whether, like me, you agree that we are living in a new geological era.

So, why are such things important? Well, it's a matter of dating. Geology works on being able to correlate one rock sequence with another, and to do that you need a global marker horizon. With this, you are able to pinpoint when on the column the two rocks were being deposited simultaneously. For example, marking the base of the holocene 11,700 years ago is a rapid global warming event that is recognised by a rapid decline in dust concentration, a sudden reduction in sodium concentration, and an increase in annual ice-layer thickness.

Its blatantly obvious at the moment that, even if humans disappeared overnight, we will leave a signature on land that will last many millennia, even after the buildings have long crumbled. Rubbish landfill sites are already mapped as geological units. Dams in rivers leave their own distinctive sediments (in fact, there are very few "natural" rivers left in the world that have not been exploited and modified by humans). Pollen from agricultural plants can be readily recognised in modern ice cores (as can lead pollution, incidentally). Channel 4 had a fantastic, although admittedly a little apocalyptic, documentary thought-experiment, speculating on what would happen if humans disappeared overnight.

And even further in the future,

But, these are all either surface geology features or found in ice, which will all eventually be eroded away over the aeons, and will eventually be deposited as sediments under the sea. Us geologists deal in good, solid rock, within which our history is history is written in sediments stretching back billions of years. The real question is about sediments being deposited today: will they be distinctly recognised as being tainted by the actions of humans?

The base of the Cambrian is defined by the sudden appearance of a complex trace fossil called Treptichnus pedum. If we remember that a fossil is simply the evidence of life recognised in a rock, then a trace fossil is not the fossil of the organism itself, but simply evidence that one was there. For whatever reason, at the time that the rocks at the base of the Cambrian were being deposited 542 million years ago, whatever animal that made the trace fossil of
Treptichnus pedum became very common worldwide, and we can recognise that explosion, over half a billion years later.

Guy Narbonne with his hand on the base of the Cambrian, at Fortune Head, Newfoundland, where the trace fossil can suddenly be found, and is continuously found after this point going up sequence in the cliff

Trace fossils usually constitute burrows or trackways, but they can also be the assembled housing of an animal. For example, in many places, fossilized wasps nests can relatively easily be picked out of the exposed sediments; these are trace fossils made by wasps. Fossilized wasp cocoons, 75 Ma old. Found by Anthony Martin in Montana, although a very common place to find such fossils is in Tenerife.

Well, in this case, buildings are trace fossils. And so are cars, and anything that we have made. So, if we were able to recognise the remains of any of these in the fossil record, then they would constitute trace fossils of humans, and we could define their sudden appearence as marking the base of the Anthropocene. We will very likely leave some very odd looking trace fossils in our sediments, such as bits of unnatural metals and glass.

Rubbish heaps in Burma. Some of the more refractory rubbish may find its way into the fossil record.

The body fossil record, though, is what we are more familiar with, and is more important in demarcating boundaries. More specifically, it is the appearance and disappearance of certain species that are recognised. What record of this will there be left in Anthropocene age rocks?

Despite the 7 billion or so humans on the Earth, we ourselves as moderate sized land-dwellers won't leave many particularly impressive fossils, apart from the odd set of bones and teeth, or maybe traces of soft body preservation from the unfortunate sods that have fallen in tar pits or perhaps a couple that have drowned in some stagnant pools.

Tollund man. We won't find many fossils like this.

But what you might not have guessed is that a much more distinctive signal than this is the sudden appearance of many species worldwide. This is not a sudden diversification; more a worldwide invasion of a certain few species. For example, Crassostrea and Zebra mussels are now found worldwide, as are a whole host of insects. In fact, in New Zealand, 50% of species are of invasive organisms. Going upwards in a sequence of rocks, this worldwide appearance of a certain few species is something that will very quickly be spotted by even the stupidest of future geology undergrads.

We have also radically shifted how biomass is used on the planet. Whilst elephants, giraffes, hippos and rhinos might look big, nowadays they only occupy barely 3% of terrestrial vertebrate biomass. A staggering 65% of vertebrate biomass is made up of domesticated animals. 32% is locked up in little old us. (Incidentally, the mass of refined iron that we have created is and order of magnitude greater than that). Whilst the fossil record of vertebrates (especially terrestrial vertebrates) is much poorer than for marine shelly things, this dramatically shows the shift in our ecosystems.

We are not just going to leave a fossil imprint, though. We are likely to leave an important geological trace as well. An increasingly common feature of modern day oceans are dead zones; nutrient rich run-off from agricultural areas cause algal blooms, which decay, using up all the oxygen in the water. A dead zone along the Louisiana coastline

The knock on effect of these blooms is that immense amounts of organic matter is deposited on the ocean floor, seen in rock sequences as darker horizons. Whilst anoxic events like this are a natural phenomenon that we see throughout the rock record, the increased frequency and scale of such events in modern times is likely to be very distinctive in the corresponding strata. 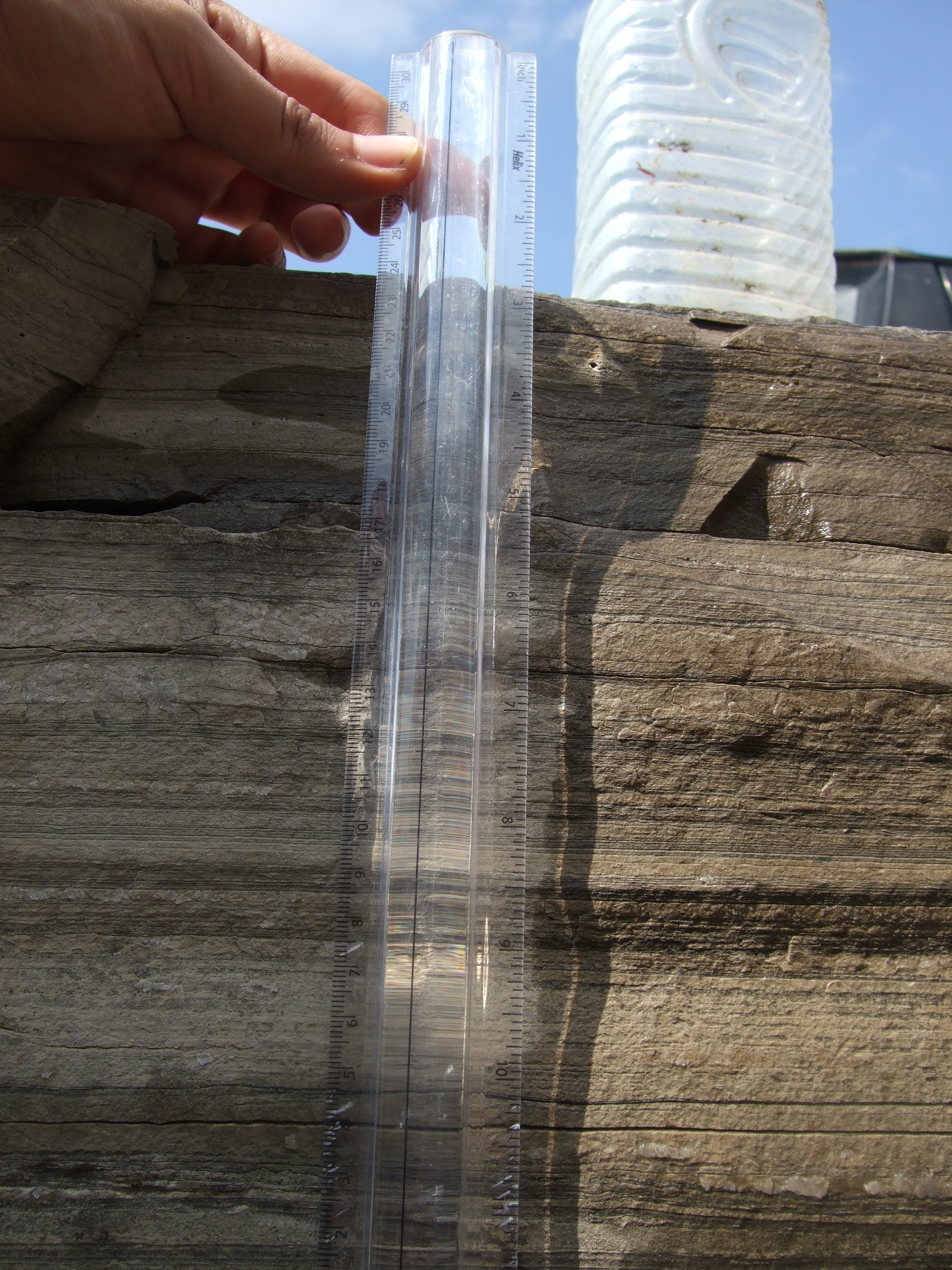 A "sneak preview" of the rocks that I'm working on. The darker, more organic rich horizons probably represent some sort of anoxic event.

Our overarching legacy to the Earth's rocks is going to be much bigger than that, though. You guessed it, it's CO2 and global warming.

One of the most sensitive groups of animals to a rise in CO2 is corals, because most CO2 is sucked into the oceans, which become acidic as a consequence. It just so happens that corals are one of the most important contributors to our record of limestones in the stratigraphic record. With less coral reefs, we will see less limestone.

Perhaps the biggest impact, however, will be if there is a rise in sea levels. Modern stratigraphy revolves around the recognition of fossilized sea shores, and watching them mould themselves up-strata in response to either sea-level change or tectonic-induced ground level change. A worldwide rise in sea levels will cause what is known in sequence-stratigraphic terms as a marine transgression; a shifting of the shoreline inland. We see this in the geologic record as the deposition of deep water rocks on top of your shallow water rocks.

So, there we go; mankind will leave a distinctive signature in the rock record that means we can recognise the rocks being deposited today as belonging to the Anthropocene. We should recognise a new era of time, because, fundamentally, sediments deposited today are not wholly naturalistic because of our influence, and we need to be able to recognise this in any stratigraphic timescale that we have.

There is one last thing, though. Where do we draw the line? I mentioned the trace fossils that mark the base of the Cambrian above; this is called a golden spike; a place, and therefore time, that we can pinpoint the beginning of a new era. Where should we draw the base of the anthropocene? The first humans? The climatic changes associated with the iron age? The beginning of the industrial age?

That day is August the 9th, 1945, the day that the final atomic bomb was dropped on Nagasaki in Japan, the bomb that ended World War II. The fallout from the two atomic bombs was circulated round the Earth, and will be recognised instantly in strata, through a spike in the concentrations of uranium and plutonium in the rocks.

Most of the material here is from seeing a talk by my colleague Jan Zalasiewicz, so I don't have sources, but see this article in GSA today for some more detailed examples.

I will heartily recommend Jan's book, which is all about the traces that we humans will leave behind in the fossil record; it's a really fun read, and not epic-ly long either.