Patrick Lockerby
Key To The Past, Key To The Future


This article is a brief overview and history of geochronology.


There are many things in nature that tend to grow in layers.  Over the course of over 1,000 years, studies of layered objects have combined to show us that nature's laws of layering can be applied in a cross-disciplinary manner.


Whether we examine deposition layering in ice cores, tree rings, sediments or other features - by comparing past layers to present-day layers we find a cross-disciplinary key to layering mechanisms.  Where clear mechanisms and trends can be discerned, deposition layering as a process over time has predictive powers: geochronology is the key to our planet's past, the key to its future.


For different types of layered objects there are different specifics of deposition of layers.  For example, in the case of wrapping or encasing layers, if the amount of material available for each layer is held constant, each new outer layer must be thinner than the underlying layer.  In the case of trees, quite apart from any climatic or nutritional variations, this basic fact of geometry must be allowed for.  To further explain that observation: if a tree is regularly pruned, it may be expected that a fairly constant amount of foliage will produce a fairly constant amount of ring-growth mass.  The rings would be expected to become ever narrower with tree age and circumference.

Trees may, of course, be found in geological formations as fossils.  The resemblance of some folded strata to sections of trees is striking.  Apart from differences in formation, the sheer scale of folded strata rules out any chance of their being fossilised trees.  No tree ever grew as tall and as wide as a mountain range.

A brief history of geochronology

Contribution of Ibn Sina to the development of Earth Sciences

"Around A.D. 1000, Avicenna was already suggesting a hypothesis about the origin of mountain ranges, which in the Christian world, would still have been considered quite radical eight hundred years later".
...
In Kitab Al-Shifa, Avicenna had presented fundamental principles of Geology in terms of Earth processes, major events and long geologic time. Those principles were later known in the Renaissance of Europe as the law of superposition of strata, the concept of catastrophism, and the doctrine of uniformitarianism. Those concepts were embodied in the Theory of the Earth by James Hutton in the Eighteenth century C.E.

Nicholas Steno's principle of original horizontality states that rock layers form in a horizontal orientation. Any deviations from the horizontal must be due to later disturbance of the rock strata.

Nicholas Steno came to geology from a background in anatomy and the scientific method.  In 1666 he examined the head of a recently caught shark. He observed that the shark's tooth structure resembled certain rocks - glossopetrae - which were at that time being discussed in academia.   He deduced that the glossopetrae resembled shark's teeth simply because they were, in fact, shark's teeth.

Although Steno made a major contribution to geology founded on his studies of fossils, his theory that fossils were left by the Noachian flood was not accepted in scientific circles.

“The purpose of this Disser­tation is to form some estimate with regard to the time the globe of this Earth has existed.”
...
“Here are three dis­tinct successive periods of existence, and each of these is, in our measurement of time, a thing of indefinite duration
...
The result, therefore, of this physical inquiry is, that we find no vestige of a beginning, no prospect of an end.”

Excerpt from Basin and Range by John MacPhee.

James Hutton believed that beneath the lower regions of the earth's crust great stores of heat were to be found.  He theorised that fusion of sedimentary layers arose by the action of this heat, basing his theory on the suggestion that all of the minerals found in different types of sediment could be fused by heat.

He theorised, based on the evidence in igneous rocks and in folds and distortions in rock formations that the extreme heat capable of fusing sediments must also be capable of:

"expansive force, sufficient for elevating the land from the bottom of the ocean to the place it now occupies".
Excerpt from Basin and Range by John MacPhee.

The earliest known geological map, by Christopher Packe (1686-1749), depicts southern England.  William Smith, however, in producing his geological maps of the entire British Isles, introduced new ways of depicting strata and new ideas about those strata.  His maps synthesised geology and stratigraphy.  Hence, although he is widely known for his major contribution to geological cartography, he may deservedly be called the father of stratigraphic geology. 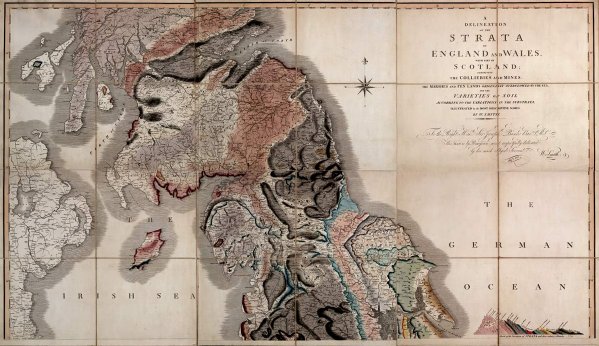 William Smith observed that fossil-containing layers were well defined and were always to be found in specific sequences.  This observation of the fossil flora and fauna led him to formulate the principle_of_faunal_succession.  This principle is of great importance in determining the relative ages of rocks and strata.

De Geer applied the term varve (Swed. varv) to the annual coarse-fine layers in sediment deposited in proglacial lakes in Sweden and elsewhere. The layers were produced by the annual melt-water sequence with rapid melting and discharge in summer depositing coarse sediments, versus slow settling of fine-grained material during the winter months.

By counting and comparing many exposures of these sequences, brought above sea level by isostatic rebound, De Geer and his colleagues produced a master chronology for Sweden, which De Geer then applied to other regions of the world, including South America (Argentina). The basis for the "teleconnection," as De Geer coined the word, was GLOBAL CLIMATIC CHANGE.

Geochronology is a cross-disciplinary study area.  It embraces so many real-world observations, so many falsifiable hypotheses, that it must be taken as supplying a reasonably accurate explanation of geological processes and their time-scales.

Geochronology is a good tool with which to examine our past geological events and climate: it explains much, and its components have been revisited and refined, validated and revalidated over the course of about 1000 years.

The accuracy with which geochronology examines our planet's past does not suddenly become invalid just because it is applied to predictions and computer modeling.

Milestones in the History of Thematic Cartography, Statistical Graphics, and Data Visualization 1800-1849
http://www.math.yorku.ca/SCS/Gallery/milestone/sec5.html

Excerpt from Basin and Range by John MacPhee:
http://www.una.edu/faculty/gggaston/Classes/Ge112/Excerpt%20from%20Basin...

If you have enjoyed reading this article, I hope you may also enjoy: