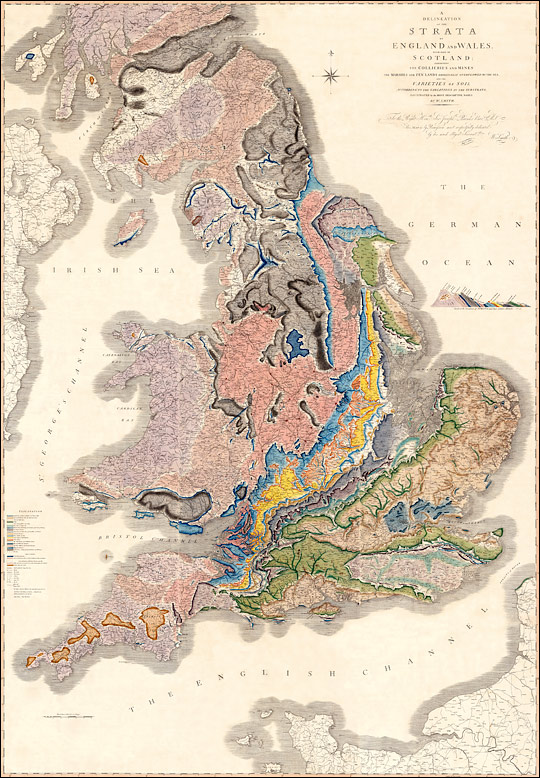 Published in 1815, Smith’s Geological Map of England and Wales and Part of Scotland was the first geologic map to cover such a large area in such fine detail. William Smith, British Geological Survey

By John Howell, Professor, Chair in Geology and Petroleum Geology at University of Aberdeen.

This year marks the 200th anniversary since William Smith published his life’s work, a geological map of England and Wales, in 1815.

While “Strata Smith” and his map are well-known among geologists, this humble man and his amazing map do not receive the attention or wider recognition they deserve. Smith’s achievement was arguably as significant as Darwin’s, yet he resides in relative obscurity. Smith’s achievement was remarkable for a number of reasons. He made the scientific leap that the rocks of the Earth’s crust could be overlaid onto a basic topographic map, in doing so giving birth to the science of geology. He also did this in the face of considerable social prejudice – at a time when the scientific community were landed gentry and gentlemen of leisure the idea that Smith, a lowly surveyor, could come up with such a revolutionary concept was derided.

His work was plagiarised and he was bankrupted, spending time in debtor’s jail, before his eventual vindication just before his death in 1839. The fact that he single handily managed to map the whole of England and Wales, in his spare time, to produce a map that is remarkably accurate even today is to any modern geologist truly breathtaking.

So impressive were Smith’s achievements that very little changed for the next 170 years. Geological maps continued to be drawn up in much the same way as he had demonstrated. Geologists walked the hills and dales, identifying rocks with hammer and hand lens, then marking the boundaries between the layers onto a topographic base map.

The basic tools were the compass, the magnifying glass, the hammer, colored pencils and a map. Today, every geology student still spends five or six weeks of their final summer at university investigating the geology of an area and marking it onto a map in much the same way that Smith worked.

In with the new

Which is not to say that nothing has changed in mapping. Since the earliest maps we have strived to explain graphically the spatial relationships between places.

The earliest maps were mere estimation. The first real advance was the introduction of measurement into the map-making process; the advent of the compass allowed mapmakers to describe orientation and direction in a systematic manner, while the barometer allowed estimates of altitude and the sextant gave information on position.

These advances led to the first real topographic maps where the map is an accurate representation of the location of both natural and man-made features. By Smith’s time, we were quite good at generating basic maps although the processes for surveying were slow and laborious. The big advance after Smith came in the early 20th century with the arrival of aircraft. For the first time the map maker could actually see a true bird’s eye view of the features that were previously only inferred from measurements on the ground. Consistent sets of scaled photographs allowed much faster mapping of the plan-view relationships between features.

The introduction of stereoscopy and photogrammetry (taking measurements from photographs) exploited the distortion apparent in a circular camera lens when applied to a square or rectangular image. By using overlapping photographs the three-dimensional topography of the features in the photo could be mathematically reconstructed, speeding up terrain mapping.

From physical to digital tools

The arrival of the computer in the early 1970s brought the first Digital Elevation Model, a 3D model created from elevation data, and greater use of the wealth of data arriving from the growing number of orbital satellites. Around the same time came the evolution of LiDAR (Laser Detection and Ranging), which – by analogy with radar – creates a map based on the reflection of a laser beam (rather than radiowave). Vast “point clouds” are built up by systems measuring hundreds of thousands of points per second, providing maps of incredible precision.

The 20th century’s final major advance was the evolution of GIS, Geography Information Science, bringing together systematically vast libraries of geographic data. By the turn of the millennium had the capacity to remotely survey our world (and even other planets, as seen with Google’s maps of Mars and the moon) and to draw up extremely accurate maps populated with layers of data.

The tools have changed for 21st century geologists following in Smith’s footsteps. In the field we now use GPS to accurately locate our position on tablet computers. Compasses and inclinometers are now integrated into our smart phones, and LiDAR machines can map cliffs with centimeter precision in minutes. New methods such as hyperspectral scanning, which uses the variable absorbency objects have to infrared light to automatically identify types of rock, terrain or vegetation, are now routine.

Data are stored and published digitally using systems such as the apps and websites of the British Geological Survey making them widely available to scientists and the public alike. So 200 years on, we may ponder what Smith would have made of the legacy of his first map. With such a struggle for recognition during his life, hopefully he’d feel vindicated in the direction geology took afterwards.

John Howell's research is currently funded by the Norwegian Research Council and a consortium of Oil Companies, details are available at http://safaridb.com/#/about/sponsors. This article was originally published on The Conversation. Read the original article.