Oprah Winfrey introduced the so-called "first pregnant man" to viewers of her April 3rd show this past week. Thomas Beatie appeared, six months pregnant, with his wife Nancy and his obstetrician, Dr. Kimberly James (by satellite hookup). You can see the complete show here. But many viewers thought the whole thing was blown out of proportion because Thomas was born with a perfectly normal uterus.

At the end of my first column on the issue, I said I would post another piece discussing the actual science of male pregnancy.

Is it really possible today? The answer, as I abstract from my 1997 book, Remaking Eden, is "almost certainly yes, but . . ."

With the birth of Louise Joy Brown in 1978, Steptoe and Edwards demonstrated the feasibility of fertilizing human eggs in a petri dish and placing embryos back into women where they can gestate to term. To date, several million children have been conceived through in vitro fertilization and born from women.

From the outset, scientists have mused aloud about the possibility of maintaining a pregnancy within the abdomen of a man. Tabloids routinely publish stories of success and in the popular 1995 film Junior,

Arnold Schwarzenegger played a scientist who uses hormones and in vitro fertilization to make himself pregnant and ultimately "give birth." Movies and novels that mix real science with science fiction often lead to confusion in the public mind as to what is medically possible and what is not. Usually, scientists and physicians can be counted on to sort it all out.

With male pregnancy, though, something funny happens: Some say it is possible while others say it isn’t. To understand how different professionals can reach such opposite conclusions, we must delve into the thought processes of ‘the scientist’ and ‘the clinician,’ respectively.

The first question is whether a human fetus could develop to term in an environment other than a uterus. Surprisingly, we already know the answer, and it's yes. Every once in a while – in one pregnancy out of 10,000 – the fertilized egg doesn’t make it to the uterus, and ends up instead in the wide open space of the abdomen, also known as the peritoneal cavity. This happens because the ovary is not actually attached to the fallopian tube (or oviduct), as is commonly thought. Instead, after ovulation, the egg must make its way into the nearby opening at the end of the tube in order to begin its journey toward the uterus. Occasionally, when conception occurs very close to the opening in certain women, the newly fertilized egg may actually fall back out of the tube and into the abdomen.

Now you might think that once an egg has fallen into the abdomen, its chances of survival are nil. Surprisingly, at the appropriate time of development, an embryo can implant itself into almost any living tissue that it happens to alight upon. And the abdomen is filled with all sorts of tissues – from the intestines to the kidney, to the liver and the spleen. With successful implantation and sufficient placental formation, the embryo can develop normally into a fetus that can be carried through a full nine months of pregnancy. At the end, of course, it has nowhere to go unless it’s delivered by a modified Cesarian Section. The medical literature is filled with sporadic reports of healthy live-born babies that were carried by mothers pregnant in this unusual way. Here's an amazing picture of a late-state pregnant woman on her belly with a fetus facing up. 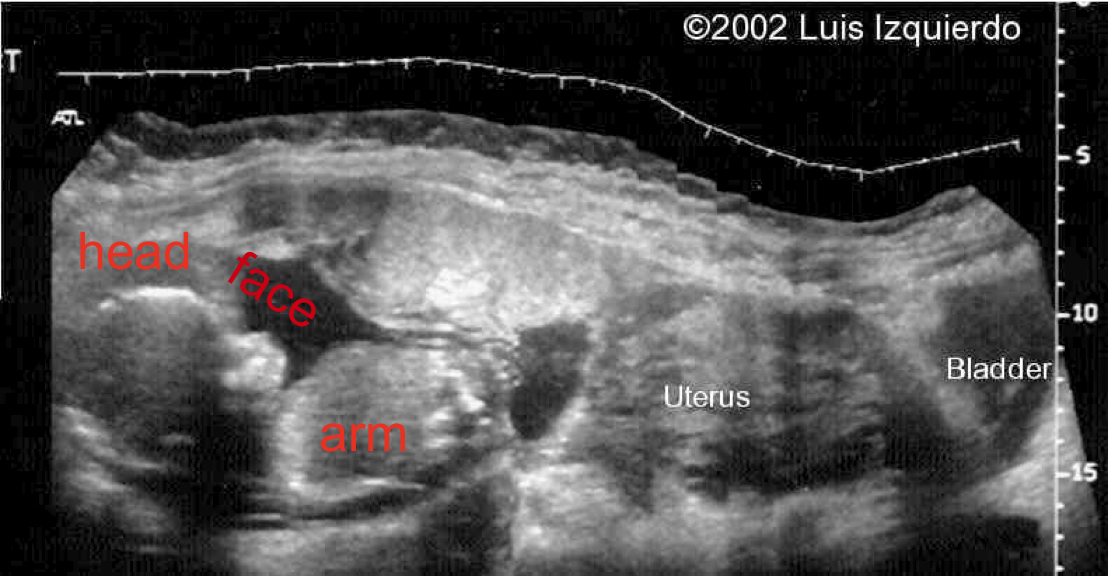 So let’s come back to the third ingredient required for pregnancy: a living womb within which the embryo can implant and attach a placenta.

If a woman’s abdomen can act as womb, a man’s abdomen could do just as well. “Clearly,” the scientist would conclude, “I’ve now proven that human male pregnancy is possible, and it’s possible today!”

“Wait just a minute,” the clinician would implore, “let’s look at all of the reported cases of abdominal pregnancy again, this time with a greater eye to the clinical details. And let’s start out with some of the general statements made by the reporting physicians”:

“Abdominal pregnancy is a rare but life-threatening condition.”
“Morbidity and mortality for both the fetus and the mother are considerable... Once the diagnosis is established, immediate surgical intervention is usually advisable.”
“Care of the patient afflicted with it may present formidable challenges.”


Abdominal pregnancy is considered a “life-threatening condition” because of the placental connection that the embryo must set up between itself and the body within which it lies.

In a normal pregnancy, it is set up with the specialized internal lining of the uterus known as the endometrium. Endometrial cells are recruited along with embryonic cells to form the placenta, but at the time of birth, the entire placenta detaches itself easily from the intact uterine wall to follow the baby through the birth canal. The ability to create a detachable endometrial lining that can be incorporated into the growing placenta is a unique property of the uterus.

Unfortuntately, when an embryo implants into an abdominal tissue, detachment is not so simple. The problem is that the development of the placenta can cause complete intermixing between embryonic and host tissues so that there is no clean boundary between the two. The more extensive the intermixing is, the more problematic it becomes to remove placental tissue. The physician has to cut between the wholely placental tissue, and the intermingled placental-‘maternal’ tissue. Large blood vessels must be severed, and as a consequence, difficult-to-control internal bleeding can take place.

Problems are not just confined to the stage at which a pregnancy is terminated. Long before the final event, a placenta can cause severe damage to an organ that it’s invaded with the possibility of spontaneous hemorrhaging that can quickly result in death.

But at some point in the future, it’s likely that reproductive biologists will figure out how to direct the growth of the placenta away from vulnerable abdominal organs and onto an easily detachable, but blood-rich, surface for growth. And then, pregnancy will be possible for men who are 100% men, although it's certainly not something that I would want to do.
Challenging Nature
More Articles All Articles
About

Professor of molecular biology and public policy at Princeton University , Silver has a Ph.D. in