For some years now, scientists, science writers, bloggers and others have been writing about the bogus bomb detector scam perpetrated by Jim McCormick.  Now, at last, Britain's Crown Prosecution Service has done what it should have done sooner: put on its best hobnail boots and jumped all over the guy. 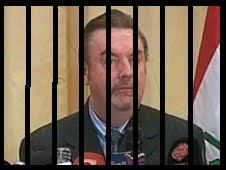 A jury at the Old Bailey found Jim McCormick, 57, from near Taunton, Somerset, guilty on three counts of fraud over a scam that included the sale of £55m of devices based on a novelty golfball finder to Iraq. They were installed at checkpoints in Baghdad through which car bombs and suicide bombers passed, killing hundreds of civilians. Last month they remained in use at checkpoints across the Iraqi capital.

McCormick, who faces up to eight years in jail when he is sentenced next month, also sold the detectors to Niger, Syria, Mexico and other countries including Lebanon where a United Nations agency was a client.

During a two-and-a-half-year police investigation, a University of Cambridge professor had conducted a "full double blind trial" of the devices and found the results were no better than random chance. The device was right three out of 25 times.

The "bomb detector" sold by McCormick was basically a box with an antenna attached and no working parts.  If it detected anything, it could only have done so as a dowsing rod.  But dowsing doesn't work.  An experimental program funded by the German government in 1987-1988 was interpreted as demonstrating a real dowsing phenomenon.

A reexamination of the data on which that conclusion was based, however, indicates that no persuasive evidence was obtained for a genuine, reproducible dowsing skill.  The absence of reproducibility suggests that the entire research outcome can reasonably be attributed to chance.

There was once a fashion for using a shock coil - a precursor of spark radio - as a "cure" for just about any ailment.  At least those gadgets used electrochemical power sources.  McCormick's "bomb detectors" would not detect bombs if you stuffed a million volts through them.  They are pseudo-science mumbo-jumbo cash cows.

Here at science20.com we have - purely as a public service, mind you  - had quite a laugh about this guy.  In 2009 and again in 2010 - twice.  However, it is my purely personal opinion that the CPS did not act until they were sent a copy of the new book which you can find on this excellent site.


Clarification: this has nothing to do with the other Jim McCormick currently in the news who is Scotland adviser to the Joseph Rowntree Foundation.
The Chatter Box
More Articles All Articles
About