NASA is sending a team of scientists to study the Arctic at close quarters.  I guess it's pretty hard to sample phytoplankton with a satellite.

WASHINGTON -- NASA's first dedicated oceanographic field campaign goes to sea June 15 to take an up-close look at how changing conditions in the Arctic are affecting the ocean's chemistry and ecosystems that play a critical role in global climate change.

The "Impacts of Climate on Ecosystems and Chemistry of the Arctic Pacific Environment" mission, or ICESCAPE, will investigate the impacts of climate change on the ecology and biogeochemistry of the Chukchi and Beaufort seas. A key focus is how changes in the Arctic may be altering the ocean's ability to absorb carbon from the atmosphere. The greenhouse gas carbon dioxide is a leading cause of global warming.

ICESCAPE takes to sea onboard the U.S. Coast Guard Cutter Healy, the United States' newest and most technologically advanced polar icebreaker. The Healy conducts a wide range of research activities, providing more than 4,200 square feet of scientific laboratory space. It is designed to break four-and-a-half feet of ice continuously at three knots and operate in temperatures as low as -50 degrees Fahrenheit.

The Healy leaves Dutch Harbor in Alaska's Aleutian Islands on June 15 and heads to the Bering Strait where it begins ocean sampling. The voyage continues across the southern Chukchi Sea and into the Beaufort Sea along northern Alaska's ocean shelf. In early July the Healy will head north into deeper waters to sample thick, multi-year sea ice and take samples within and beneath the ice. 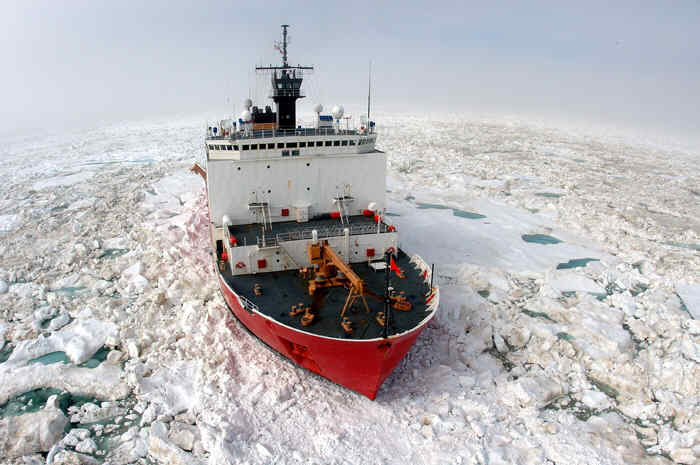 http://www.uscg.mil/pacarea/cgchealy/
.
The USCG Cutter Healey is currently headed to the Aleutians.  You can follow its course on the  map at Icefloe and get a view from the bridge via the frequently updated webcam shots at Lamont-Doherty Earth Observatory.  Most recent images are at the top of the list.
. 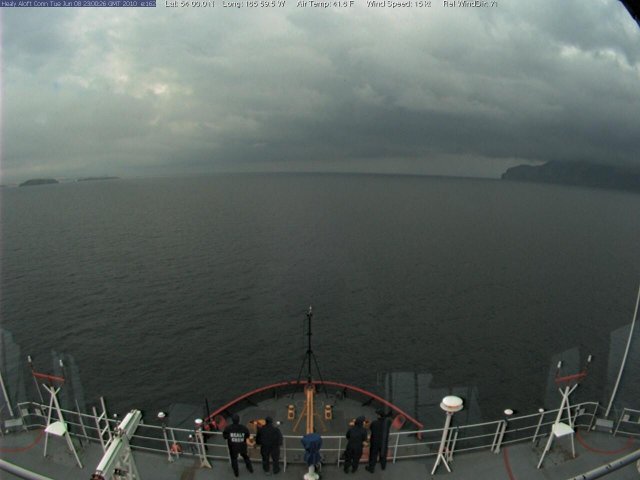 Reduced size image.  Full size image available for anyone with poor sight at site cited above.
The Chatter Box
More Articles All Articles
About