Patrick Lockerby
The Rise Of The Time Machines

What do you think happened to the first person to claim to be able to predict the future using a machine built on scientific principles?  You may think he was treated with scorn, treated as a crank.  In fact he was given lots of money.

His invention was funded, not because the government of the day went to school with him, but because he was able to validate his method.  Scientists using the same method were able to predict future events with great accuracy.

A time machine can give us accurate information about the future.  Such information is of military value.  For example, if you are going to build the world's biggest and best warship you'd best be able to predict whether or not it's going to be able to get in and out of harbor.  Will the tides be high enough to carry the ship over the sandbar?  Is that sandbar growing?  If only we had a time machine to let us know these things!  We could cut short our parliamentary debate on tides.  It's so much more fun to wine and dine: especially at the taxpayer's expense. 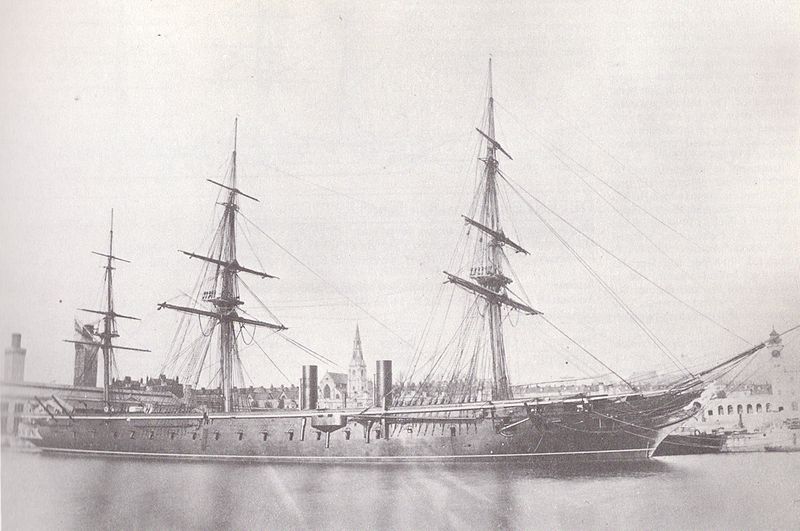 Right!  Time to admit that I have indulged myself with a hook headline, or as Hank Campbell prefers to put it: click bait.

My point is that if you have a method which can give you information about future events with great accuracy and repeatability then you have a scientific equivalent of a time machine.

Time and tide wait for no man.  But if you understand the physics of tides you can cheat time:  you can know how high the water is going to rise or fall in a distant harbor without needing to go and measure it.

When you plot the height of water against the time and date you get a wiggly line.  If you wish, you can say that the graph is a 2-dimensional representation of the tide gauge pointer's 4-dimensional journey in space-time.

Here is a popular scientific diagram, a weather record. This line I trace with my finger shows the movement of the barometer. Yesterday it was so high, yesterday night it fell, then this morning it rose again, and so gently upward to here. Surely the mercury did not trace this line in any of the dimensions of Space generally recognized? But certainly it traced such a line, and that line, therefore, we must conclude was along the Time-Dimension.

There are two ways of plotting a time-line of the rise and fall of water in a harbor.  One way is to use a recording tide gauge.

The other way to know the timeline in advance is to somehow get hold of tomorrow's recording from such a machine.  Impossible?  On the contrary - it's very easy!  Once you have built a machine of exactly the right type you can produce tide graphs for any harbor and any day.  In effect, you have a time and tide machine.  The first such machine was built by Sir William Thomson, who later became Lord Kelvin. 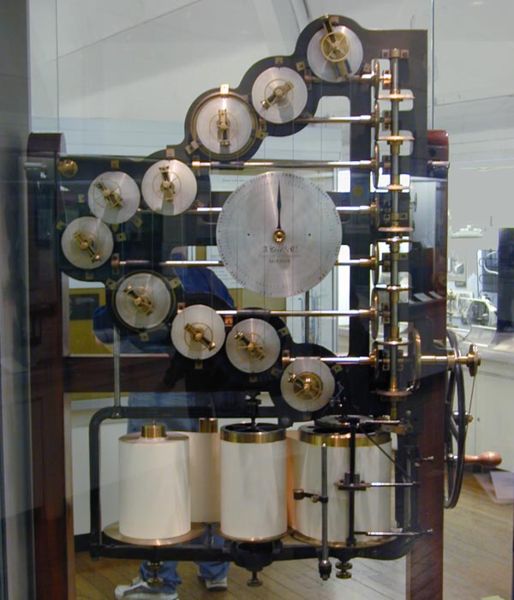 Before he built his tide-prediction machine it was necessary to employ teams of human calculators - known then as computers - to predict tides at even one location.  By mechanising the calculations it became possible to produce regularly updated and accurate tide tables for the whole of the British Isles.

A tide gauge merely records the current depth of water.  A tide predictor can record the depth of water today as accurately as a tide gauge will next week or next month.  A machine which can predict events is as near as you can get to a time machine.

At first glance it seems that the only way to validate predictions is to wait to see if they come true.  The trouble with that is that you can only publish valid tide tables if you have validated them.  But if you wait on validation then your 'prediction' is merely a historical record.

This leads to the method by which the output of Lord Kelvin's machine was validated.  It was set up to 'predict' tides which had already been recorded.  In effect, initialising a tide-predictor to, say, 1810 and then getting it to predict tides for 1820 is equivalent to sending it back in time to 1810 to do a ten-years ahead forecast.  Forecasting from known prior states is called hindcasting.

From the early 1800s let us come back to the future: let us see beyond the invention of the tide predictor and Babbage's calculating machines.  As we travel forward through the 1930s to the 1950s we see that predictors are based on vacuum tubes.  They can emulate mechanical calculation devices and they can operate faster.  And on we go past the invention of the transistor and the integrated circuit to the ordinary, average personal computer - PC - of today.

Any average PC can calculate in milliseconds what Lord Kelvin's machine could not have calculated in a week.  The modern day prediction of tides is almost child's play.

From forecasting tides we have moved on to many other and more complex computer models.  For example, a computer program can show the positions of stars, planets, moons, asteroids, comets etc. as they will be many years ahead.

Whatever the purpose of the forecast, the only known scientific way to validate is to hindcast.  You initialise the program to a date in the past and then run the program up to a date between the start and the present.  From the perspective of the model and the start date, the output is in the future: it is a forecast.

Just imagine if you could do that with horse races.  What would people say if they knew that you could run a hindcast capable of forecasting yesterday's horseracing results?  I am confident that your scientist friends would be amazed, and very interested to know more.  I am equally confident that people who don't understand the scientific method would be falling about laughing, thinking how useless and stupid it is to invest time, effort and money into forecasting an event that has already happened.

If somebody doesn't understand that hindcasting is a scientifically sound model validation method:

would you trust them to take a brand spanking new ship out of harbor over a sandbar?

Related:
Pushing The Moon Away With Victorian Machinery
The Chatter Box
More Articles All Articles
About