A great tragedy is unfolding in Pakistan.

There is not a single region of Pakistan unaffected by floods.  Whole villages have been wiped out and agriculture lost.  How will these people be fed.  Formerly, the USA and Russia could be relied on to to send food relief.  How will Russia send food aid to Pakistan when it has its own problems with grain supplies?

The world gave and gave again for Haiti.  In terms of people displaced and without food, water and other supplies, the Pakistan tragedy is far worse.

The United Nations is launching an urgent appeal for millions of dollars to aid the 13.8 million Pakistanis impacted by the country's worst flooding in 80 years.

The scale of the destruction has now eclipsed that of the 2004 Indian Ocean tsunami, Pakistan's 2005 earthquake and the Haiti quake in January, the UN's Office for the Coordination of Humanitarian Affairs (OCHA) said, although the number of deaths is much lower.

"Those who need humanitarian assistance here are certainly more than those needing assistance in any of the other three disasters," Maurizio Giuliano, an OCHA spokesman told Al Jazeera.

While people with the power to make a better world play their mind games and try to prevent action on global warming, poor people die.  The poor people of the world know exactly how politicians and agendists game the system, but they have no voice.  Today, as in the past, it takes a poet to sum up the problem.

This poem by Yousaf Jhelumi, Poet of the Punjab, seems particularly apt today. 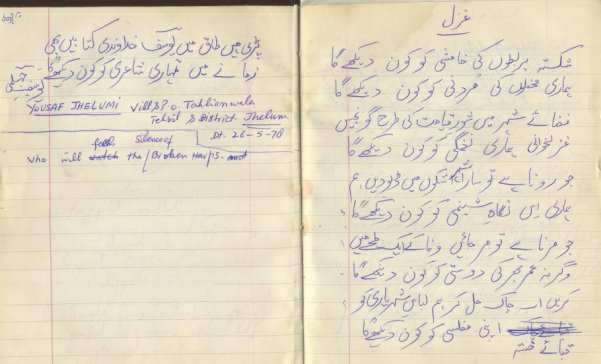 Who will heed the silence of our broken harp strings ?

Who will note the deadness of our mute gath'rings ?


Doomsday's come let's thunder out a noise as storms in Heaven,

insensitives are deaf to all our lyrics and their rhythm.


Pearls hang on eyelashes , but if it be our fate

then let our floods of tears drown the whole state.

unless we prove our bona -  fides with lives lost for a brother.


Let's go !  Destroy the office robes of those who claim renown,

but who will see when we reveal the rags beneath the gown ?

Oh !  Yousaf !  When the Holiest books aren't heeded in these times

think you that anyone will take the time to read your rhymes ?

Yousaf Jhelumi, Poet of the Punjab

This is not a call to arms or revolution.  It is a complaint against politicians.  Politicians have absolutely no intuitive idea of what it is like to be an ordinary villager.  The ordinary villager wants only a fair share of the planet's resources and the right to live in peace.  That isn't much to ask, but why ask when there is nobody listening?

The reference to 'lives lost' relates to verses in the Quran about our duty to save lives.  It is similar to a well-known phrase in the Bible: "Greater love has no man than this: that a man lay down his life for his friend."

If you want to know about the physical and chemical properties of a planet, send an astronaut.

If you want to know what the planet feels like, send a poet.

I am a poet.  I have travelled the length of Pakistan as an ordinary person.  During my travels I was treated at all times as an honored guest.  By everyone I met.  Without exception.

Pakistan:  my tears are yours.

The poem is copyright Yousaf Jhelumi.
I was given, at the time he wrote it, full permission to publish it.
The image is from my notebook and is my copyright.
The translation is my copyright.

The image:
Permission is given to reproduce the image subject to the strict condition that a link is made to this article so that funds may be raised for the relief of the victims of this tragedy.

Translation:
Permission is given to translate the poem into any language and to publish that translation under the translator's copyright subject to the strict condition that a link is made to this article so that funds may be raised for the relief of the victims of this tragedy.

All of the revenues from this article will be paid to DEC, the Disasters Emergency Committee:
http://www.dec.org.uk/