If one of the characters is a singer, make sure they sing in a contemporary style.

Now add in a stirring contemporary theme tune and you may well have a blockbuster.

Wrapped deep in the concept of political power is psychological power.  Whoever controls truth controls the battle.

In a few words, most reports are false, and the timidity of men acts as a multiplier of lies and untruths.
Clausewitz

All things are connected

Military interest in the Arctic peaked during WW2 and again during the cold war.  Studies of the Arctic conducted by the military provide a very useful record of what the Arctic was like, a record of great use in determining if current Arctic climate is, or is not, abnormal.

The military and the intelligence community have also funded a great deal of research into disinformation science.  Disinformation science looks into the ways that language and other forms of communication are for purposes of gaining some form of  military or psychological advantage.

For every lie there is a truth.

Truth, like a military installation, may be heavily camouflaged.  Just because something looks like a duck and flies like a duck, and maybe even quacks like a duck, that doesn't means it's a duck.  It may be a drake.  Is the difference important?  It is if you are a duck.

I have seen writings which claim that the current state of the Arctic is just part of a normal cycle.  If that is true, why was the Arctic usually described by Europeans as an icy waste?  Why did John Gay, in 1728, write these words?

Were I laid on Greenland's Coast,
And in my Arms embrac'd my Lass;
Warm amidst eternal Frost,
Too soon the Half Year's Night would pass.

Those lines about eternal frost were set to the same tune as:

Tom, Tom, he was a piper's son,
He learned to play when he was young.
And all the tune that he could play
Was over the hills and far away;

That song and tune are so widely known that it is a long-standing joke that a request be made to a bad musician to play over the hills and far away.

After the invention of weaponry using gunpowder there was a great deal of scientific investigation into the basic principles of such weapons.  Barrel length, bore, shot weight, wadding materials, charge and prime quantities and granularities, all these and more were thoroughly researched.

The greatest leap in accuracy came from the invention of rifling.  The Baker rifle was by no means the first gun to use rifling.  But it is one of the most famous - deservedly so.

For a weapon to be of use in the field, it must work reliably in all weathers.  The scientists and engineers behind the success of the Baker rifle were quick to make all necessary modifications to ensure reliability in the field. 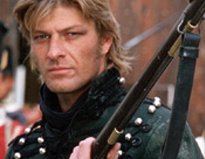 Sharpe's Rifles was1 a group of riflemen using Baker rifles.  Sharpe is the hero2 of a series of books and films set in the era of Napoleon Bonaparte and Sir Arthur Wellesley, best known under his later title Duke_of_Wellington.  The books were written by Bernard Cornwell.

When a team works well it works magic.  The team involved in the production of the Sharpe TV series worked historical magic.  The pairing of Sean Bean with Daragh O'Malley was either serendipitous or inspired.

I won't make this article over long by giving too many details - you can get those from the excellent3 Wikipedia articles: Sharpe (TV series) and Richard Sharpe stories.

Historical realism for me includes an aspect of warfare that is not usually well represented in movies: intelligence.  In the Sharpe series you get to see both intelligence gathering and BS dissemination.

The whole package is wrapped up in a style reminiscent of the 'boy's own tales of derring do' books and comics, but without the crappy unrealistic 'with one bound he was free' kind of dialog.


One of the characters sings the occasional song.  No surprise there.  It's what singers do.  John Tams adds another element of realism to the series.  He also sings the theme song.  The spoken introduction in this video sounds like Sean Bean:
.

There was another kind of magic worked by the Sharpe series.  It has given rise to the establishment of a charity: Sharpe's Children

While filming the Sharpe series over a seventeen year timespan at various locations in Portugal, Ukraine, Crimea,Turkey and India the actors of Sharpe witnessed many atrocities against children. While filming  Sharpe’s Challenge and Sharpe’s Peril in India, actors witnessed little children living in the gutters of Jaipur and Jodpur in Rajasthan and on the streets of Kahjurho in the state of Madhya Pradesh,living in the most horrific circumstances.

Many of these children were orphaned, many abandoned but all  remain destitute. Though they seem to smile their days away, the reality is that these children live their lives unloved and unwanted and totally without love or hope.

Just as Bernard Cornwell's creation, Richard Sharpe, rose from the gutters to realise his dream and gain high rank in the British Army, it is The Sharpe's Children Foundation's intention to give children of perhaps a lesser god  the same opportunity.

You tube if you want to, I'll pipe

The thing I most dislike about YouTube is the many users who describe a theme tune as a theme song.  Chalk and cheese.

Some contemporary historical facts and video:

[2] - the addition of the word eponymous is tautologous and is deprecated.

[3] - when I snarked them before it was over just one page out of many.  One error doesn't bring down the whole edifice.  Someone should explain that to the IPCC haters.
The Chatter Box
More Articles All Articles
About