Patrick Lockerby
Widening The Net - The Capture of Dzhokhar Tsarnaev

Whenever there is a high profile criminal act like the Boston Marathon Attack, we usually hear from the media that "the net is closing" on a suspect.  In this age of rapid communication, surely it is more often the widening of the net that leads law enforcement agencies to the suspects.  Thanks to science, a communications net can be established very rapidly and globally.  Thanks to science there can be no hiding place for a high profile fugitive from justice.

In the public eye, the net "closing in" on a suspect is a physical and observable thing, a dragnet.  An area is cordoned off and an intensive search is made within that zone for the suspects.  The expectation is that a suspect will be unable to move freely and will eventually be found within the zone.  This works best when the zone is set up rapidly enough and strongly enough.  It did not work as expected in the case of Dzhokhar Tsarnaev, who was discovered and captured outside of the locked down area of Boston.

Although millions of people were adversely affected by the lockdown in Boston there were few complaints.  From my own scanning of reader comments in blogs and media it would seem that  the few people who complained of rights being infringed were probably not Bostonians.  When you have people in your town who have bombs and who have no regard for human life it makes perfectly good sense to keep people off the streets.  There are two obvious benefits to this action: firstly people are safer in their own homes and secondly a fugitive on empty streets will stick out like an overused proverb.

In the best (worst?) Hollywood movies, whenever a population is at risk there is always someone who wants to deny the general public their right to know that they are at least potentially in danger.  We can be thankful that in the real world of Boston the opposite strategy applied: tell the people and keep on telling them.

The rapid identification of the two Tsarnaev brothers led to the death of one and the speedy capture of the other.  This outcome, I suggest, is due to the law enforcement agencies' public outreach.  Science advances because data and methodologies are shared.  In the past few days it has been shown very clearly that law enforcement can take a leaf out of the science textbook with beneficial results.

The idea that the agencies shared data with the public is intuitive: photos and videos of the suspects were released together with updates about their suspected whereabouts.  But how did the agencies share their methodologies?  Obviously, they did not cite chapter and verse of their procedures, but by their very actions they demonstrated at least some of their methods.  In this age of surveillance cameras and mobile phone cameras the general public could watch the positioning of forces almost live and as it happened.

In a Hollywood scenario where people are denied access to knowledge, any person coming face to face with a fugitive would probably not recognize that they were in danger.  In that scenario lives are lost.  In the reality that is Boston, Bostonian David Henneberry knew that the dragnet had failed, knew that the lockdown had been in his back yard and knew enough to get away from danger and call the police when he saw what looked like a body in his boat.  The police responded rapidly.  The image below, from @MassStatePolice, shows what the police helicopter crew saw. 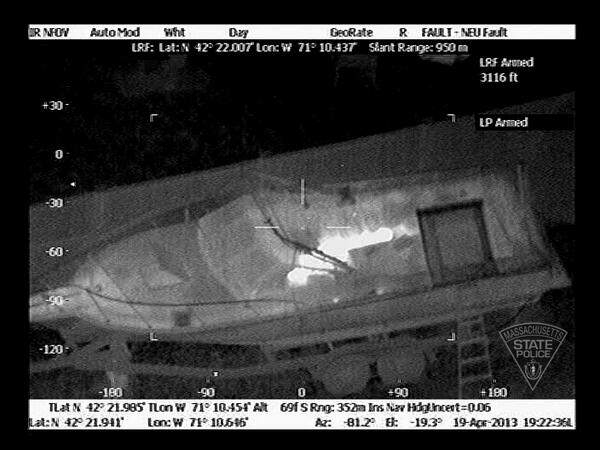 This is the age of the internet and the cameraphone, brought to you by science.  The application of this science and technology to the capture of a fugitive is brought to you by ordinary caring people - the public at large.  A fugitive may escape the dragnet, but for as long as ordinary decent people are prepared to help law enforcement agencies in whatever way they can, the wider net of ordinary people will ensure that there is no hiding place for evil people.

We do not yet know why these brothers committed these crimes.

“One thing we do know is that whatever hateful agenda drove these men to such a hateful act cannot, will not succeed. They’ve already failed.”
President Obama