Tweet
"Numerous studies have indisputably demonstrated that particulate inhalation results in health problems far beyond the lungs," write the authors of an article in Nature Communications saying they can detect small micron particulate matter in a few placentae and therefore, what, that birth defects are probably happening?

There are two serious problems with aggressive framing of results that can only at best be called exploratory. First, we can detect anything in anything at this point. We simply didn't detect PM2.5 60 years ago because we could not, the same way parts per million was detectable but parts per billion was not. Yet as air has gotten cleaner - so clean we essentially have no smog in the United States outside geographies where pollution can aggregate, the fear has not dissipated a bit. The second problem is that the "numerous" studies the authors claim is actually just one, and it is not a paper at all, it is a review of papers by the team that made their fame with a controversial paper claiming small micron particulate matter is killing us all. There are just no bodies 26 years later because...well, we have no answer for that.

Even if you want to believe PM2.5 is harmful, there isn't much of it, as this WHO data show. And when it comes to actual pollution (PM10) it's almost non-existent. Yet activist scientists and journalists routinely show people with masks in China (which is PM10 pollution) when they talk about PM2.5 the same way they always show a graphic of a toddler screaming while getting a vaccine and a tomato with a syringe in it to scare us about food.

The 1993 Dockery paper that started all this hype has become a totem for pollution activists the way Wakefield's paper on vaccines and Seralini's paper on rats have become for anti-vaccine and anti-GMO groups, but no one has seen the underlying data even 26 years later. Not even EPA. Instead, the manufactured worries we are told to have about particulate matter you can't even detect without an electron microscope were part of a sue-and-settle agreement during the Clinton administration, and EPA did what the settlement required them to do. And then the Obama administration trotted out this pseudoscience when they wanted to penalize American companies and needed to feel science-y doing it.

So the basis for the scare-mongering designed to appeal to Discover magazine journalists is supposed to be "numerous studies" but is instead one meta-analysis which states, "There has also been emerging evidence of PM-related cardiovascular health effects."

So, no evidence. Unspecified "emerging evidence" is codespeak for unsubstantiated statistical correlation, the kind of nonsense that the International Agency for Research on Cancer, Ramazinni Institute, and often our own rogue National Institute of Environmental Health Sciences push out to scare people about bacon, baby powder, and weedkillers. 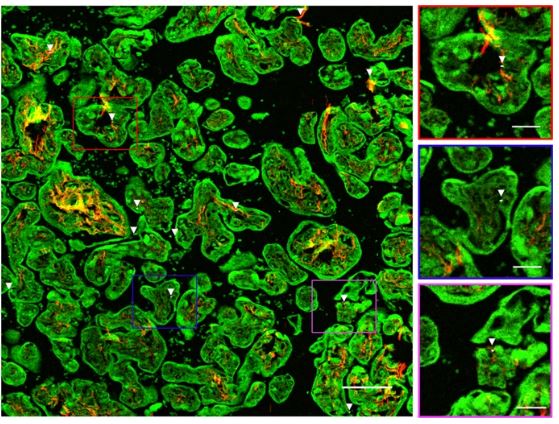 If we can detect evidence of black carbon particles at the fetal side of the human placenta, be afraid. But why? We're 150 years into the gasoline era and health is better than ever. Europe is overrun with diesel trucks and cars and no one suffers worse health due to it. Image: https://www.nature.com/articles/s41467-019-11654-3

There is nothing wrong with a result in 10 mothers of course, that is what an exploratory paper is, but this paper oozes agenda. We already have a crippling problem with rampant denial of vaccines, agricultural science, even physics and the harmful effects of real pollution. All of those occurred because scholars trumped up results to invoke a conspiracy and get attention. Mothers are already being terrified by charlatans like Paul Fagan and groups who claim if HRI Labs can detect glyphosate in breast milk, it must be harmful even a drop in 60 Olympic swimming pools.

Mothers don't need yet another form of homeopathy putting them in a panic.

If physicists started writing papers worrying because they can detect neutrinos passing through the placentae of pregnant women, and some of those babies end up having autism, journalists would write about it, but mainstream physicists would laugh them out of the New York Times for misunderstanding what particles can do. Such homeopathic posturing is nonsense, and this scaremongering is homeopathy of trace particulate matter in the same way. But it's hard to find people in epidemiology and obstetrics who stand up to this stuff the way the physics community defends against claims of time travel. Instead, most want to be like the Centre for Environmental Sciences at Hasselt University and get some attention.