Unlike most others, which are just used as a leavening agent or a binder so egg is substituted by xantham gum or tofu or some other chemical and isn't really for cooking, three tablespoons of Just Egg is touted to be just like a regular egg and can be used for an omelet or scramble.

So if you don't want to eat liquid chicken, you can eat whatever this is instead. 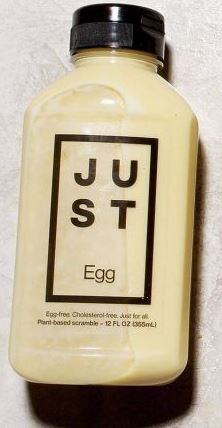 Just Egg is a smart name because they can claim it connotes Justice, as in more ethical, and avoid the problems Just Mayo had in claiming to be real mayonnaise.