Tweet
Climate change will mean the end of democracy, warns The Week, while Discover tells us a million species are at risk, based on a media kit for a document that hasn't been released and uses broad estimates to make its claims. I predict it will not go anywhere because a million just isn't big enough these days.

In the spy movie satire "Austin Powers: International Man of Mystery", when Blofeld-type nemesis Dr. Evil is awakened from cryogenic freezing and renews his, well, evil ways, he first suggests holding the world hostage for one million dollars.

His associates laugh politely and tell him one puppet company they own alone generates billions so he ups the number to ... $100 billion.

That's where we're at when it comes to crisis inflation about the environment and species extinction. It's become so common for a new species to be discovered and immediately declared at risk of extinction that the public no longer takes it seriously. Though journalists and environmentalist are doing what they can to demonize changes to the Endangered Species Act, the fact is it has become a political football; a tool for trial lawyer groups like Center for Biological Diversity to sue and settle over. And they have pumped the number up to over 1,000 on the official U.S. list, all of which they can sue over, while lobbying for thousands more to be added. 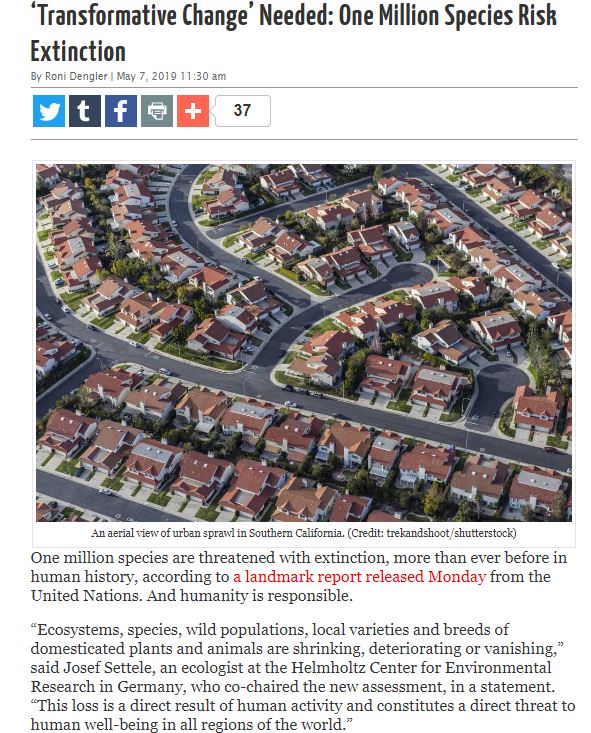 You are the pathogen, left-wing publications continually tell readers. It's exhausting. But the landmark report was not released, the media synopsis was. This is what passes for science journalism in 2019.

When we filed an amicus curiae brief about the Mississippi Gopher Frog at the Supreme Court, for example, it was because if the case lost, it would make the U.S. Fish And Wildlife Service the most powerful agency in America - without any voter accountability. In a prearranged settlement with Center for Biological Diversity and others, they had used a hand-picked consultant in Massachusetts (Industrial Economics, Inc., a 100-person organization with exactly one client, the government, who refused to share date on how they made their claim, even with FWS, as our FOIA request showed) to declare that the only viable place for the Mississippi frog was a private landowner's property in ... Louisiana. A state in which the frog hadn't even been seen in 50 years, on a piece of land in which it literally could not survive. The landowner was being shaken down for $30 million, told they would have to tear down an existing forest and put in a new one so the frog from another state could survive.

That case lost unanimously at the Supreme Court, because it was so outrageous it could almost be an Austin Powers-type parody of the environmental movement. But the reality is not far behind. Crisis inflation is the norm so if Discover wants to get attention from citizens who are already suffering "green fatigue" due to weekly claims about endocrine disruption, carcinogens, PM2.5, Big Pharma, pre-diabetes, vaping, and a whole lot more hysteria, they will need to up their game.

There have been billions and billions of species on earth and we only even know about maybe 8 million of them. We actually know so little the number could be 6 or it could be 9 million. So saying only a million are at risk isn't really meaningful, that is in the margin of error.

If journalists want to get noticed, they need to start talking about billions of species in peril. It is no more or less valid than saying a million at risk based on a media talking kit about a review of estimates, or that global warming will cause the U.S. constitution to go extinct, but it will get the kind of attention they are hoping for. Until the public gets jaded by that as well.

We're in a Dr. Evil world of environmental hyperbole, but for that to work claims have to keep raising the stakes. Bring on the 2,000 foot sea level rises.