Tweet
In the Wall Street Journal, Science 2.0 columnist Amir Aczel tackles the biggest question of all; how to reconcile religion and science when people on the fringes of each are doing the best to declare war on each other.

He notes that 51% of Americans don't believe in the Big Bang. Startling, yet if we ask that 49% that do believe in it how it actually worked, they have no idea. They just have faith in science.

He notes that Einstein favored a static universe too - the Big Bang is actually not intuitive. 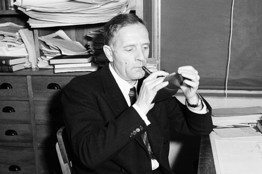 And people still get plenty of things wrong today. He takes physicist Lawrence Krauss to task for being wrong about cosmology - or at least being at odds with existing knowledge.

Of course, he may end up being completely right. We have no way to know that yet. But accepting everything an elite tells you to believe is un-American.

In the Beginning There Was an Atom: with respect to the big-bang theory, science and faith are not at odds by Amir Aczel, Wall Street Journal