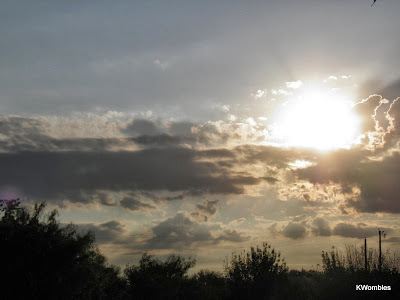 The textbook I use with my composition students advises them not to use overused phrases, seriously, like "According to Webster's Dictionary." And you know, if there's one thing I've read too many times, it's "According to Webster's Dictionary."  There are other phrases, of course, and the admonition to avoid cliches in one's writing, but cliches exist because they allow people to express something quickly in a manner that is meant to convey instant communication and understanding between those using it and hearing it.

It doesn't always work, though. And our children often show us the truth of that in ways that have laughter ringing out. Yesterday, Lily was complaining that her ribs hurt. And I responded (we were at her grandparents), pointing at the right side of my chest, that "it hurt over here while I was teaching yesterday." She promptly responded that I wasn't teaching over at her grandma's yesterday.

Communication is such a bitch between people in general that some dusty old dead dude named Wiio came up with rules for it. Rule number one? "Communication usually fails, except by accident." Watch a married couple discussing who's going to do what, and you'll see it's a freaking miracle when both parties hear the same thing.

And yet, in the autism community, many act under the assumption that communication is going to be understood just like it would be in the general population. Are people ignoring all the messed up communications in the larger world? It's frakked everywhere; it's just that some folks have an even harder time with it.

There are myths about autism, to be sure. The myth that people with autism will have no empathy is one. Some may not have empathy. Some may have difficulty expressing it. But for every stereotype of empathic failure, there are undoubtedly hundreds of autistic people proving that stereotype a lie.

But there are also myths about neurotypicality and these need to be knocked down, as well. There is no such thing as neurotypical. Yes, there's a bell curve where the mythical average exist. And yes, there's no doubt that some people have more advantages than others, but everyone has issues. Everyone has weaknesses. And many of us walk around with invisible disabilities. We don't talk about them. We don't share them because we've seen what happens when we do. Many of us may have DSM diagnoses, too, that we choose not to disclose. Parents may be guilty of making functional assessments of autistic bloggers based on their blogging abilities, but it's just as true that autistic bloggers have assumed functional levels of parents based on their blogging rather than on knowledge of their neurologies. In fact, if there's one universal, it's that everyone in the autism community is constantly making assumptions about others. It's what we do as human beings to allow us to make decisions. We can't do the latter without the first. Sometimes those assumptions are incorrect, and if we're humble enough we correct our assumptions and adjust our behavior accordingly.

Everyone suffers from communication errors at times. And everyone lacks empathy at times. The autism community doesn't have a stranglehold on this. There's a reality in the debate between parents and autistic adults that is being ignored when it's to the advantage of those who identify on the spectrum: that there are parents who are undiagnosed autistics or at the very least BAPpy, and yet any consideration of their difficulties in communicating is often missing from the conversation equation, especially when it's more convenient to ignore that reality.

Here's another reality that is interesting: parent advocates arguing that autistic voices need to be heard and respected who then ignore those autistic voices they disagree with because of the cure issue  or the vaccine issue. If all autistic voices are important and need to be listened to, then arbitrary exclusion of those whose positions you dislike is inappropriate. But maybe that's because we don't really mean that, not really.