Cooperation has been/still is a major factor in the success of the human species, and in many others as well. Altruism and fairness are thought to play an important role in the development of cooperation. But when in a human life do these traits develop? For quite some time, it was thought that they developed fairly late in ontogeny.

Lately, however, there has been some incipient research into the moral and prosocial behaviors of young children. A new study investigated the sense of fairness and tendency to be altruistic in 15-month-old infants.

A first experiment concerned the violation-of-expectation (or VOE paradigm). This basically means that infants tend to look longer at events they didn’t expect. In the study, the young children watched two movies. In one, crackers (discrete) were divided between two recipients, in the other one it was milk (continuous) that was being divided (see figure 1). Turns out that, on average, the infants looked longer when the division is ‘unfair’ (one recipient receives more than the other), regardless the type of resource that was being distributed. 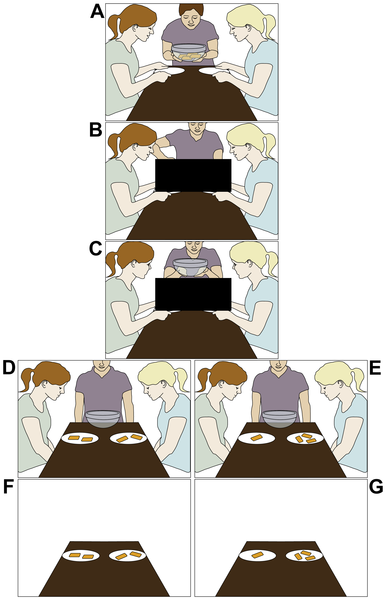 Figure 1: Summary of the 'cracker-video'. D and F illustrate the unfair outcome, E and G the fiar one.

A second experiment was a sharing task where two toys were placed on a table. The baby could then choose its favorite toy. A familiar experimenter subsequently handed the non-preferred toy to the baby. At this point, an unfamiliar experimenter entered the room and asked the infant for a toy (see figure 2). Here, 68% of the infants shared a toy. 31% shared their preferred toy (labeled by the authors as ‘altruistic sharers’), and 37% shared the non-preferred toy (‘selfish sharers’). The remaining 32% did not respond at all. 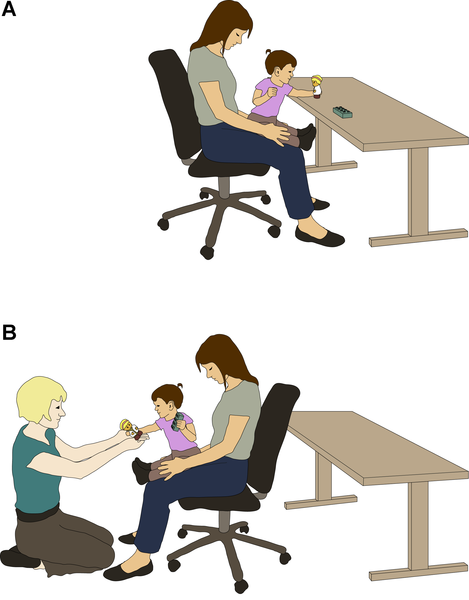 Figure 2: Summary of the sharing task. In the preference phase (A), the infant could choose a preferred toy. In the request phase (B), an unfamiliar experimenter asked for a toy.

Finally, the researchers investigated whether there was a potential relation between the infants’ performance during both experiments. A large proportion of altruistic sharers (92%) looked longer to the unfair outcome, whereas 86% of the selfish sharers looked longer at fair distributions.

Taken together, the present findings strike a new path in social-moral development, because they suggest that in addition to instrumental helping, and empathetic concern to others' distress, constituents of fairness understanding and altruistic behavior emerge during the second year of life. Furthermore, this study suggests that besides a general propensity to show concern for others' well-being early in life, egalitarian motives also seem to emerge early in ontogeny, a finding that complements and informs current research emphasizing strong egalitarian motives in adults. Hence, these early emerging other-regarding preferences might be conducive to explaining the evolutionary success of our hominin lineage, since they are considered to be important contributors to cooperation. Given the early developing nature of such sensitivity and its theoretical relation to the evolution of human-specific forms of cooperation, these findings support the claim that other-regarding preferences have been adaptive in our ancestral small-scale group environments and therefore been transmitted up to the present, most likely via both biological and cultural mechanisms.
With respect to the evolution of cooperation, one mechanism, indirect reciprocity, has been suggested to be intimately linked to the evolution of human morality and social norms. In this vein, our findings may provide an empirical piece of the puzzle of human cooperation, given that early in ontogeny, rudiments of behaviors and skills that may be related to the ultimate mechanism of indirect reciprocity are present. Future work will help elucidate how early moral and prosocial capacities like fairness and altruism interrelate with other skills and behaviors considered important for human cooperation, such as understanding and applying (non-moral) social norms.

So, nature or nurture, or (as the authors indicate, and as is the case for a vast majority of traits) both? Also, do the differences between infants reflect personality differences, or different rates of development, or both? Perhaps it's also interesting to take a look at the infants's family: do they have a lot of siblings (and does that result in a greater inclination to share)? How about their parents, do they posses an 'altruistic' or 'selfish' character?