Creating sperm or egg cells in the laboratory has been tried several times in the past few years. The reasons for this range from a better understanding of the fundamentals of the reproductive process, to helping infertile couples with their child-wish. The attempts, using embryonic stem cells, however, did not yield viable germ cells.

Previous attempts focused on the creation of epiblast stem cells from regular epiblast (see figure 2) cells in a mouse embryo. The epiblast stem cells were further cultured in a dish, in the hope that they could give rise to primordial germ cells and, eventually, sperm cells. Despite numerous attempts, however, no research group succeeded with this approach. 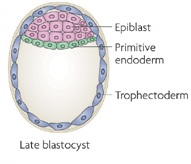 So, a different approach was needed. The Kyoto group cultured embryonic stem cells in cocktails of growth-factors and proteins, which led to epiblast-like cells that could be used to generate primordial germ cells. These were implanted into testes of male mice, were they further matured into sperm cells that (after being removed again) were able to fertilize egg cells in vitro, which were subsequently implanted into surrogate mice mothers. This resulted in normal offspring, which, in turn was able to produce offspring again (see figure 3).

It is hoped that this finding could eventually lead to treatments for male infertility. But before this happens, additional research is required to bridge the gap between mice and man.