New research that includes representatives of 99% of mammalian families, has provided a ‘big picture’ for mammalian phylogeny. By assembling a large and robust DNA matrix, based on sequences of many different genes, a research team led by biologists from the University of California, Riverside and Texas A&M, has examined how different families are related to each other.

Based on this data, the team was able to construct evolutionary trees (see figure 1) and date divergence times. These divergence dates were estimated with the help of a relaxed molecular clock, allowing the team to incorporate different rates of evolution, rather than just one. The tree was calibrated with age estimates of numerous mammalian fossils. This research is meant to be a starting point for further inquiry, such as developing trees that incorporate representatives for genera and species. 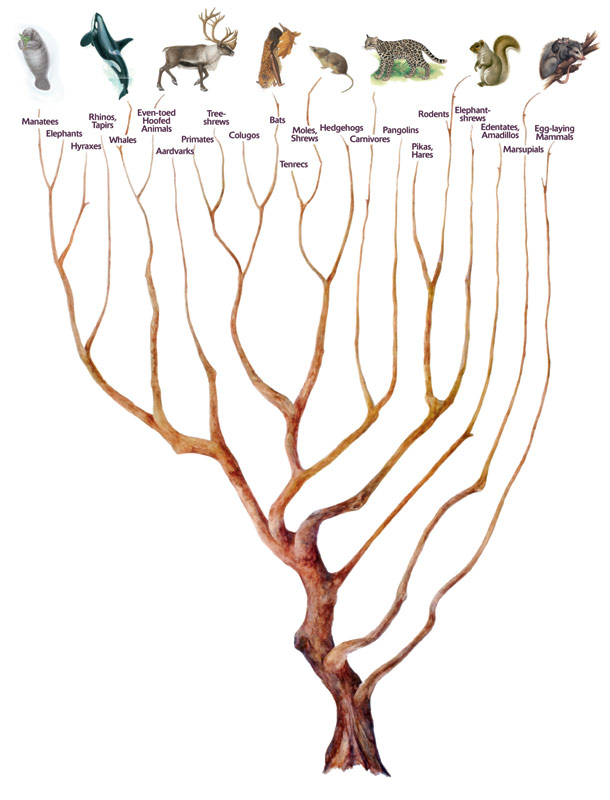 The team also looked for spikes in diversification. Aided by an algorithm that could discern whether diversification was constant, or whether there were ‘pulses’ of increase or decrease.

A first spike was noticed at around 80 to 82 million years ago (known as the Cretaceous Terrestrial Revolution), corresponding with the time when a lot of orders split from each other and flowering plants diversified, providing opportunities for small mammals.

A second spike was noted at around 65 million years ago. When dinosaurs and other large creatures went extinct, a large ecological space opened up, quickly filled by the smaller mammals, facilitating the radiation of different orders of mammals.

But, in contradiction with the hypothesis of the Eocene delayed rise of mammalian diversity, the team did not find a spike of diversification around 50 million years ago.

The researchers stress that this study is a work in progress, as they are planning to construct a supermatrix, including the majority of living mammalian species, over the next few years.