We all know chronic stress isn’t good for you. This seems to be true in all organisms. But can stress kill you? A new study says yes, if you’re a dragonfly larva at least.

Researchers from the University of Toronto investigated the effects of stress on the development and survival of dragonfly larvae, reared in the presence of a predator. These juvenile dragonflies were raised in aquaria that also contained a predator. Important is that this predator had no way to actually attack the larvae. 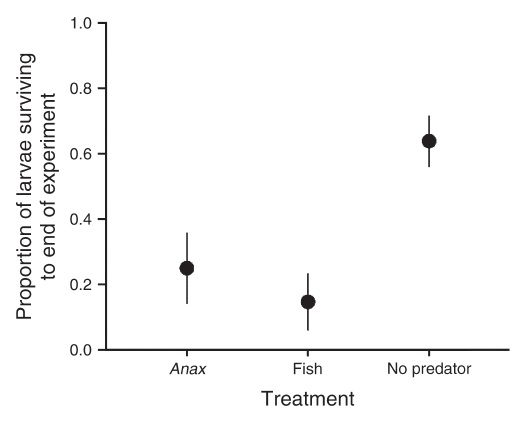 Figure 1: Proportion of surviving larvae for each treatment.

The second experiment was designed to test the survival and metamorphic success of the larvae when exposed to low predator densities. Here, there were two treatments: vertebrate predator, or no predator. It was found that predator presence, even at low densities had a negative impact on both larval survival, and metamorphic success, meaning that the larvae didn’t survive metamorphosis (see figure 2). 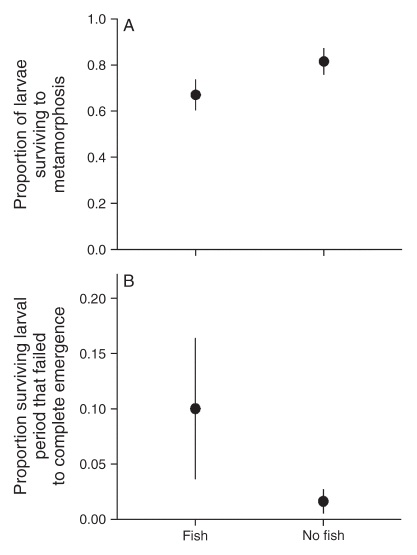 While the researchers didn’t investigate the causes of this increased mortality and failure at metamorphosis, they do offer some potential explanations:

Stress involves increases in stress hormones and can negatively affect animals in a variety of ways, including compromised immune response and altered behavioral patterns involving trade-offs that affect survival. We did not measure neuroendocrine stress responses, however these responses are known to be common in diverse taxa with the potential to generate a cascade of negative physiological responses…. Increased mortality among larval L. intacta in the presence of nonconsumptive predators suggests that the systemic effects of stress make larvae more vulnerable to mortality factors, including the interactive effects of reduced energy gains and exposure to pathogens that might otherwise remain sublethal. Increased metamorphic failure in the presence of caged fish also could reflect a stress response above and beyond the normal stresses associated with metamorphosis.

The extent to which predator-induced, nonconsumptive mortality occurs in other animals is currently unknown. Accounting for this form of mortality may aid interpretation of results from studies of predation that are focused on direct consumption. Our findings indicate that a certain amount of prey mortality can be caused by predator-induced stress, and points to the need to advance understanding of indirect effects of predators on prey populations.