Once upon a time, tool use was considered to be a uniquely human feature, setting us apart from the rest of the animal kingdom. But, when Jane Goodall observed chimpanzees using sticks to ‘fish’ for termites (see video 1) in the 1960’s, this idea received a serious blow. Since then, tool use has been observed in a variety of animals, ranging from the usual primate suspects, to less expected critters, such as crows, dolphins, elephants, otters and even octopuses (see video 2).

And now, fish should be added to the list?

Already known, archerfish ‘shoot’ their terrestrial prey with jets of water (see video 3), but whether or not this constitutes tool use, is a matter of much debate. Likewise,the use of water jets by sting rays to flush food out of a pipe (see video 4) is still a much debated example of potential tool use. Now, however, for the first time, a handful of reports of fish cracking open hard-shelled prey by banging it on a rock have been confirmed by photographic evidence (see figure 1). The blackspot tuskfish (or Choerodon Schoenleinii) was caught red-handed while crushing shells on a rock at the Great Barrier Reef. Around the rock used as anvil, a scattering of smashed shell remnants was found, suggesting that this behavior was not a one-time fluke.

Video 4: Stingray using water jets to get food out of a tube. 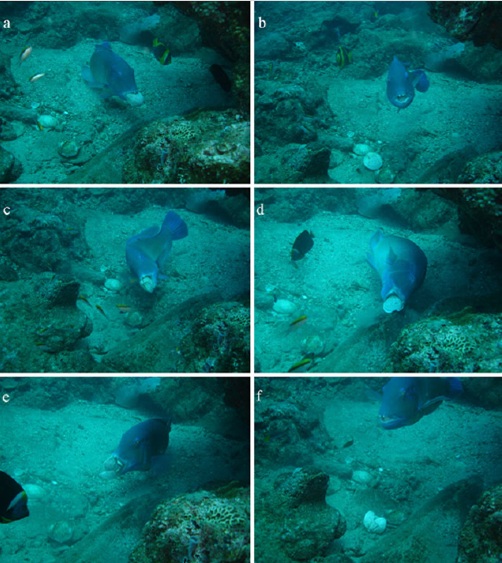 Figure 1: Series of six images, showing the blackspot tuskfish cracking a shell on a rock.

But is this really tool use?

Well, that of course depends on the definition used.

For example, the definition established by Jones and Kamill (1973) is “the use of physical objects other than the animal’s own body or appendages as a means toextend the physical influence realized by the animal.” In this case, fish cracking shells on rocks are using tools.

But if one uses the widely implemented definition established by Beck (1980), “the external employment of an unattached environmental object to alter more efficiently the form, position, or condition of another object, another organism, or the user itself when the user holds or carries the tool during or just prior to use and is responsible for the proper and effective orientation of the tool.”, then these fish are not really using tools.

Of course, manipulating tools is harder for fish than it is for, say, primates, as fish can basically use only their mouth to do it. So, perhaps what exactly constitutes tool use also depends on the animal group under consideration?