Recombination, the process by which a molecule of (usually) DNA is broken and joined to another one, is one of the main sources of genetic diversity in sexual organisms. Meiotic recombination takes place during the meiotic division (which gives rise to the gametes), and through the process chromosomes show crossover (see figure 1).

Figure 1: An illustration of crossing over during the meiotic division.

Previous research has shown that the rate of this meiotic recombination exhibits a fair amount of variation between different species, and even between individuals. Genetic experiments have illustrated that there must be a heritable component related to this recombination rate, but the exact nature of this component remained elusive. 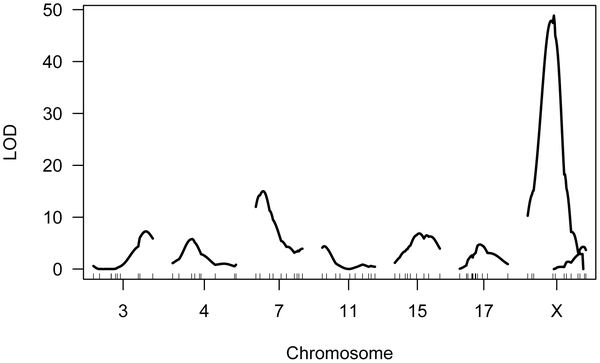 Figure 2: The eight quantitative trait loci (including 2 on the X chromosome) that explain the difference in recombination rate. (LOD stands for logarithm of odds, and is used for the estimation of recombination frequency. Usually, a LOD score of over 3 is considered to be evidence for linkage, in this case between a genetic marker and recombination rate.)