Back in the good old days, most deaths were due to infectious diseases. Today, thanks to modern technology,life expectancy has increased and the pattern of deaths has changed.

According to the CDC, today’s top ten leading causes of death only include two due toinfection. Both are infections of the lungs  - one is a mixture of infections (#3) and the other is influenza plus pneumonia (#8).


Increased life expectancy in advanced societies has led to an increased number of old people and a corresponding increase in dementia. In particular, Alzheimer’s disease is a major problem and now lies in 6th place in the mortality table.

However, some intriguing recent findings suggest that infection may play a role in several supposedly non-infectious diseases, including Alzheimer’s disease and perhaps some other neurodegenerative diseases. More is known about Alzheimer’s disease, so we will focus on this here.

Two totally opposite effects of infection have been found. Firstly, there is the alarming possibility that neurodegenerative diseases, such as Alzheimer’s Huntington's, and Parkinson's diseases, may be transmissible under some circumstances. Secondly, there is evidence that Alzheimer’s disease may be the result of a poorly controlled response to infection of the nervous system.

Neurodegenerative Diseases are due to Prionoids

The neurodegenerative diseases, Alzheimer’s, Huntington's, and Parkinson's all involve the accumulation of insoluble amyloid proteins. For example, in Alzheimer’s disease plaques made of amyloid beta protein accumulate in brain cells. The insoluble aggregates self-propagate due to newly made protein binding to older misfolded protein. This ultimately results in the destruction of nervous tissue.

This process resembles the mechanism seen in the prion diseases such as BSE (bovine spongiform encephalopathy or mad cow disease). Here the prion protein misfolds, aggregates and destroys nerve cells especially in the brain.

True prions not only self-propagate but they are transmitted from one animal or person to another. The misfolded proteins responsible for Alzheimer’s and Parkinson's disease are not true prions as neither Alzheimer’s or Parkinson's diseases is transmitted from person to person. Apart from this they show many similarities with prions and have therefore been named “prionoids.” 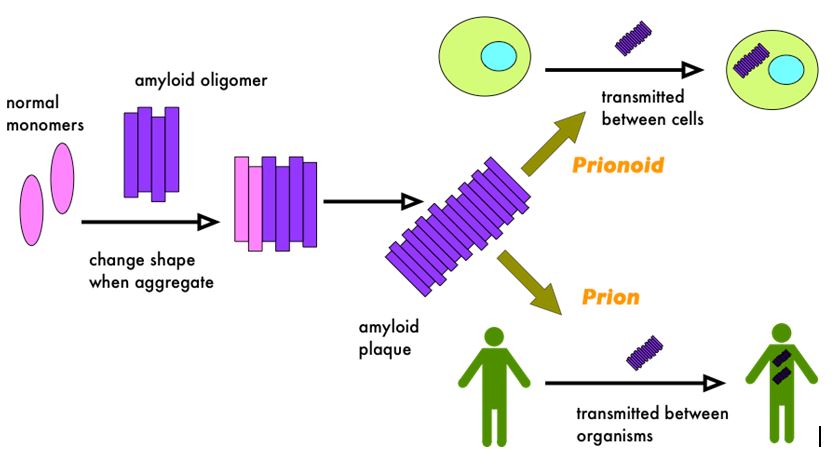 Both prions and prionoids cause damage when they aggregate. Prions, like the agent of mad cow disease can be transmitted from person to person. Prionoids like the Alzheimer’s or Parkinson's amyloids can only move between cells.

In experimental animals, both the amyloid-beta protein of Alzheimer’s and the alpha-synuclein protein of Parkinson's disease can be transmitted between cells. So far, there is no evidence that either Alzheimer’s or Parkinson's diseases can be transmitted from person to person. Nonetheless, if amyloid-beta or alpha-synuclein were somehow able to get from one person to another, they might well be able to enter nerve cells and trigger disease. This alarming possibility obviously needs more investigation.

Is Alzheimer’s Disease Triggered by Infection

The opposite side of the coin is the growing evidence that the amyloid-beta protein of Alzheimer’s plays a natural role in combating infection! Indeed, the misfolded amyloid proteins of Alzheimer’s, Huntington's, and Parkinson's have all been suggested to take part in responding to infection.

When the body is infected it responds in a variety of ways. Specific antibodies are made against specific diseases. However, there is a set of less specific responses that target groups of invaders – such as “small RNA viruses” “parasitic worms” or - in the case we are considering“ - bacterial infections of the nervous system”.

It has been known for a while that Alzheimer’s disease correlates with the presence of several bacterial infections. These include Treponema, which causes syphilis, and Borrelia, which causes Lyme disease as well as Helicobacter, which may cause stomach ulcers. It also correlates with the presence of herpes virus. Only recently, has the probable reason for this emerged.

One way the body kills invading bacteria is by puncturing their cell membranes. This lets vital ions leak out and the bacteria die. The body has a selection of antimicrobial peptides that form ion channels. The amyloid beta protein of Alzheimer’s can act like this too. 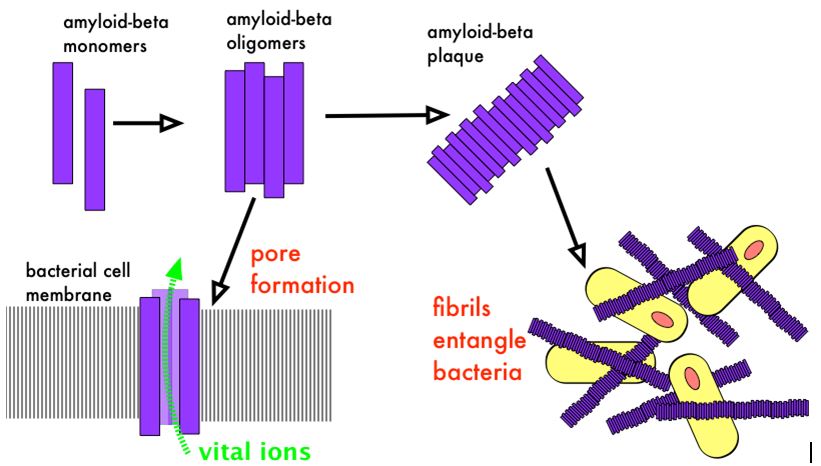 The amyloid beta protein of Alzheimer’s has a second action, related to its ability to form insoluble aggregates. When bacteria such as Salmonella enter the brains of mice, more amyloid-beta protein is made. First oligomers of amyloid-beta bind to the bacterial cell surface. Then the amyloid-beta forms longer fibrils that trap the bacteria and prevent them from entering brain cells.

Perhaps it is not too far fetched to see the buildup of amyloid-beta plaques in Alzheimer's disease as “used ammunition” left over from anti-bacterial warfare. As you age, the blood-brain barrier gets more leaky. More bacteria get through and more amyloid-beta is made. Eventually, enough amyloid-beta accumulates to damage your own cells. People vary greatly in susceptibility to infection and in their ability to clear away the amyloid-beta. Much of this variation is genetic, so some unfortunate people are much more likely to get Alzheimer's than others.

Although most viruses cannot penetrate the nervous system, some such as West Nile Virus or Zika virus can do so. Recent experiments have shown that infecting mice with this type of virus triggers production of the alpha-synuclein protein of Parkinson's disease. The alpha-synuclein protein protects mice against virus infections in the nervous system, especially the brain.

The mechanism by which alpha-synuclein protects against viruses is not yet known. It binds to nerve cell membranes and might affect responses to virus invasion.

Whether it acts directly against viruses is unknown.