Some cultures have demonized alcohol while others have welcomed it. Modern research has confirmed that over indulgence in alcohol is bad for you but also shown that moderate drinking increases health and life expectancy. Most of the beneficial effects appear related to the heart and circulation – but not all. Recently, positive effects of alcohol have been shown for both Alzheimer’s disease and diabetes – but these are less clear cut.

As is widely known, Alzheimer’s disease has become a major problem in advanced societies, as life expectancy has increased. At present, there is no cure for Alzheimer’s, although some treatments can slow down its progress. Neural degeneration in Alzheimer’s disease has been linked to the accumulation of the beta-amyloid protein in brain cells. beta-Amyloid is derived from the larger APP protein found in nerve cell membranes and clumps together forming plaques (see Fig. 1). However, the most dangerous form of beta-amyloid may be smaller aggregates that block nerve signaling rather than the larger clumps. 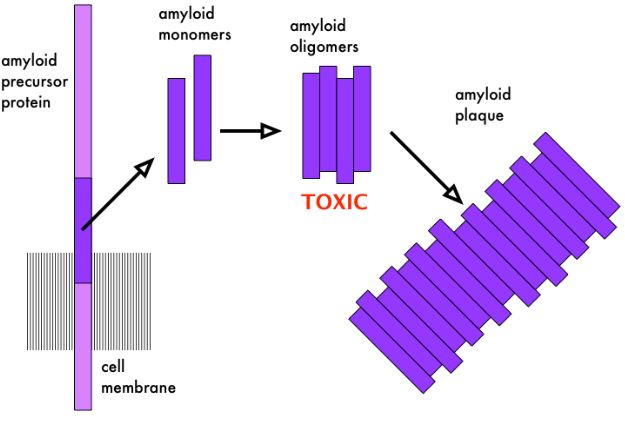 APP (amyloid precursor protein) is located in the cell membrane. When APP is cut up it releases amyloid beta (purple segment) as one of the fragments. This aggregates in stages, eventually forming plaques. But the intermediate oligomers are probably the most dangerous.

Alzheimer’s patients have been exhaustively surveyed over the last couple of decades in the hope of revealing environmental factors that may affect the disease. The earliest surveys linking Alzheimer’s and alcohol were rather confusing. While occasional studies suggested drinking alcohol increased the risk of Alzheimer’s, considerably more surveys found drinking led to a decreased risk, and yet others found no significant effect.

But there are yet more complications. It is well known that men and women respond differently to alcohol in some respects. A long term Norwegian study has been tracking around 40,000 participants since the 1980s. They found that moderate alcohol intake has a positive effect on both Alzheimer’s and diabetes but that the protective effect of alcohol was a lot more pronounced for men than women. The reason is unknown. This finding is curious, since generally women are more sensitive to the effects of alcohol.

As if this complication was not enough, genetic factors are also involved. The most important concerns apolipoprotein E. This protein helps control levels of fats and cholesterol in the blood. It also affects removal of b-amyloid from the brain. There are three genetic variants of apolipoprotein E (apoE). The one to avoid is apoE4, which predisposes its carriers for Alzheimer’s. This has an allele frequency of 14% in the population. It turns out that alcohol does not help those people who have apoE4 – indeed, if anything, alcohol has a negative effect.

Apparently, then, before deciding how much to drink, you need not only to know whether you are male or female but which apolipoprotein E genes you carry!

Getting back to the positive alcohol effect - how does it work? Work from the last couple of years shows that the smaller aggregates of b-amyloid can insert into the cell membrane where it forms channels. These interfere with nerve cell signaling by letting calcium ions (Ca2+) across the membrane. Alcohol opposes aggregation of beta-amyloid, which decreases the number of channels damaging nerve cell action (see Fig 2). 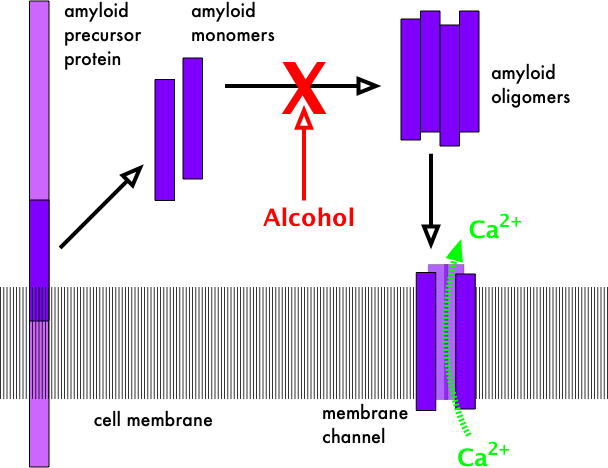 APP (amyloid precursor protein) is located in the cell membrane. When APP is cut up it releases beta-amyloid  (purple segment) as one of the fragments.

This aggregates in stages, eventually forming plaques. But the intermediate oligomers are probably the most dangerous.