A while back I wrote about the program I was involved with in the conversion of uranium in Russian warheads into fuel for use in the U.S. That nuclear fuel is still being used in many U.S. reactors but the program finished in 2014 after a successful 20 year period of collaboration. I’ve had a chance to reflect on my travels there and have formed this fascination with the two countries as being imperfect (broken) mirror images of each other in geography and history.

Sometimes countries grow under influence of similar large forces into one with almost opposite direction but similar form as a mirror reflects in almost a negative image.  Two countries might also show similar development when their geography and historical periods are alike. For example, Russia and the U.S.A. were competing superpowers during the Cold War, even though they were former allies during the Second World War.  In some ways, the geography of the United States and Russia show similarities when reflected (i.e., east in one is west in the other) about Western Europe, the historical source of much of their common traditions and technology.  This comparison is not new-the 19th century French historian, Alexis de Tocqueville, made comparisons and predictions of the countries later rivalry in his 1835 book, Democracy in America.

First some large-scale comparisons-in an east-west comparison, the directions are switched between the two countries.  The early population of the United States settle along the east coast, whereas most of the population (both early and currently) of Russia is in the east (i.e., western part in Europe).   This is no surprise, since both populations mostly came from Europe, which is closest to the eastern shore of the U.S. and the western border of Russia.  Each of these regions have further frontiers (the U.S. “West” and the Russian Siberia) after crossing a set of north-south low-rising old mountain chain, the Appalachians in the United States, and the Urals in Russia.  Both these frontiers had been originally settled by Asiatic tribes which interacted with the explorers, trappers, mineral resources, and development.  To the south of these populated regions are the citrus fruit-producing and recreational areas of Florida, in the United States and Caucasus region between the Black and Caspian Seas in Russia. Both have great rivers draining the agricultural watersheds: the Mississippi, Ohio, and Missouri River Basin in the United States and the Volga, Don, and Dvina river system in Russia.  Both these systems allow for interior transport of goods. However, a major major difference is that the rivers in Siberia run from south to north, which does not make them suitable for cross-country or oceanic transportation of goods and materials. 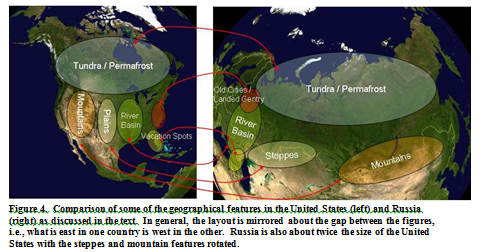 The succession of land types moving west across the United States are the Great Plains, the Rocky Mountains, deserts, and the west coast.  In Russia, many of these regions can be found moving east from the Urals, but often they are appear to be rotated and pushed south compared to their matching U.S. features.  For example, the Great Plains grazing area might be comparable to Kazakhstan, a nation that was formerly in the USSR; the Rockies would be one of the mountain chains, e.g. Altay and Sayan Mountains running west to east and forming the border with Mongolia and China.  Below these mountains are the Chinese Taklimakan and Gobi Deserts.  The main agricultural regions of the USSR included the rich Ukrainian lands and the part of the Volga River Basin south of the taiga (forest) line.

But a contrast arises when comparing the U.S. west coast with the Russian east coast.  In the United States the coast is quite populated and productive in agriculture and industry.  In Russia, the west coast is twice as far away as in the United States.    But is there is an equivalent of California in the Russian experience?  First, the eastern coast of Russia is primarily not on the Pacific Ocean, but instead, sheltered by a group of islands.  Just south of these islands, at the same latitude as California, is the nation of Japan, with about similar area and population to California.  Second, the Russian explorers, such as Bering, were not deterred after failing to find resources on the eastern coast.  In fact, after exploring the fish and seal riches of Alaska, Bering went on to establish a provisioning fort at Fort Ross, about 60 miles north of San Francisco on the California coast in 1812.  The Russians left in 1841 after negotiating the provisioning of their Alaskan operations by Americans.  The fort’s land was sold to John Sutter, who in a few years would discover California gold.

There are also parallels in historical timelines.  Both regions realized a major change near the end of the 15th Century as Western Europe experienced exploration, reformation, and scientific discovery.  To the west of Europe, America was discovered and slowly colonized.  To the east of Western Europe, Russian rulers threw off the yoke of the Mongol overlords and were able to develop an independent nation and explore Siberia.  Both developing countries instituted a system of forced labor: slavery of Africans in the United States and serfdom in Russia.  At this time slavery in Europe was almost extinguished, although earlier western culture, specifically, the Classical Roman Empire, had been heavily slave-based.  Both the native population and hierarchical system caused problems and revolts over the years, such as King Phillip’s War (colonies) and the Stenka Razin uprising (Russia) in about 1670.  The American Revolution and the Pugachev Uprising both happened about 1770.  The systems were patched together with compromises and crackdowns as seen in the Missouri Compromise (1820) and the Decembrist uprising in 1825.  In 1848, many Western European countries had liberal revolutions that were eventually suppressed; some of these actions led Karl Marx to formulate his Communist Theories.  In the United States another compromise (Compromise of 1850) was enacted, but in Russia, the czar had clamped down and did not allow an uprising to occur.

Both the United States and Russia moved away from systems originally based on forced labor.  While the Unites States eventually emancipated slaves in the mid 1860s during its Civil War, and the Russian serfs were emancipated a few years earlier in 1861 by Tsar Alexander (both Lincoln and Czar Alexander were later assassinated), the Russian serfs remained highly indebted to the landholders until the revolutions of 1905, 1917 and the Russian Civil war ended in 1921, almost 60 years after the United States Civil War.

The countries formed an alliance during WWII, however, their experiences were quite different. The United States had an immense amount of industrial capacity, manpower, and land, which were not attacked.  Russia moved industry east of the Urals, had an immense amount of manpower including collecting trained soldiers from throughout Siberia.  The European part of Russia was fought over fiercely.  Some estimates of the USSR military and civilian losses are around 25 million dead (about 13% of the population, in comparison the United States, which had about 420,000 fatal casualties or 0.32% of the population).  Therefore, the USSR had over 50 times the number of war deaths, with land and property similarly affected.

The two parallels of geography and history are not necessarily independent.  The locations of the United States and Russia relative to Western Europe coupled with relatively undeveloped land and resources at the emergence of the modern era, might have guided them in similar directions to their superpower statuses during the Cold War, although fundamental differences in their development have led to their unique and distinct ways of looking at the world.

On my trips for the program I would often bring gifts of coffee mugs that allowed picture inserts.  One of those inserts is below that went along with this toast that I gave at one of the banquets there:

“I would like to offer a toast to our countries’ continued common history.

A few days ago, you celebrated the 400th anniversary of the freedom of Russia from the Poles in your Unity Day. This event was remembered as we walked past the statue in Red Square.  In a few days we will be celebrating the 393 anniversary of the first Thanksgiving.  This celebrates the survival of the English pilgrims in Massachusetts with the help of the Native Americans.

But I found other historical events to help tie to our HEU transparency program. Instead of going 400 years back, if we only go half that time to 200 years ago, both of our countries remembered persevering through battles that saw both our capitals burning- Moscow attacked by the French, Washington DC attacked by the British.  These events led to inspiring music in the Tchaikovsky 1812 Overture and the American National Anthem.

Again half that time, 100 years ago we both entered a chaotic generation of European wars and economic transitions, represented on the cups by recruitment posters.

Half that time again to 50 years, which many can remember, we were engaged in spaceflight with the pioneering flights of Yuri Gagarin and John Glenn.

Finally, a bit less than half that time, 20 years ago, the HEU transparency program began. And although this program now is almost over, I believe we all look forward to new positive chapters in this continued common history.”