"We have the habit, as humans, of only thinking that what we see is real", began Neil Tyson.  Our job as astronomers is to 'turn something invisible and make it real'.  His premise: space weather is important to study, but scientists also have to step up their game in communicating why this is important. 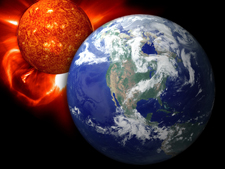 Dr. Neil deGrasse Tyson spoke at the 3rd Space Weather Enterprise Forum today.  As an astrophysicist and director of the Hayden Planetarium, part of his job is "when the universe flinches and the reporters come to knock on my door" it's "because there is a hunger" for science.

Space weather is the study of how the Sun affects the Earth, not just as heat but with both recurrent and cataclysmic atmospheric and magnetic events.  One notable case, the 1989 country-wide power blackouts in Ontario due to solar activity.  Even more notable, the meteor-induced extinction of the Cretaceous-era dinosaurs.  "We're not an island in space, we're a participant."  He notes "our atmosphere on Earth is thinner than the thickness of shellac on a schoolroom globe."

"How do you get people to care about something we can't see, can't hear, can't smell, can't touch?"  Space weather "needs a total overhaul of its vocabulary so we can discuss it with the public.  In astrophysics, our words are simple and clean, and we tell it the way it is."  Big red stars are 'red giants', spots on the sun are 'sun spots'.  We have the big bang, black holes, "we celebrate 1-syllable communication."

Neil further argues we're a space faring culture without realizing it.  Reciting a laundry list of satellites and space activity bringing everything from hurricane predictions to television and Google maps,, he notes "you know you're a space faring culture when these things are there and you don't take note.  Don't complain that you don't know the names of the astronauts-- that's a good thing."  They are no longer rare.

He suggests a reality show, where 'someone sneaks in to their house and removes everything that came from the space program.'  By the time he removed their cell phone, their TV, their Lasik eye surgery-- then had them break a leg during an unpredicted hurricane, we got the point.

"The weather report is the only part of the news where the announcer gets to predict the future.  Nowhere else in the news are you allowed to do this."  Even the 2012 End of World hype is a call for science.  "They're trying to tap cosmic knowledge to predict the end of the world."

Much of the problem is that scientists are not trained as communicators, worse, "you get no credit for that in the rank of scientists."  One issue he raises is tidying up our vocabulary.  Saying we need to study solar magnetohydrodynamics is 'how to end your conversation quickly with your congressman."  "We're not slogging through this wall, this lexicon that serves more to obscure then highlight, to the uninitiated."

"The visualization of cosmic phenomenon may be the most fertile way" to reach people.  A huge impact from Apollo was simply the first pictures of Earth from space: "no nation borders, just land and clouds and oceans.  The modern day conservation movement is traceable to that photo."

"When we showed our asteroid collision" as a planetarium movie, "people just saw it was cool, [...] but when we show the sun in its dying day",  well, in short,  "the children have nightmares for years." Neil concludes, "Maybe we need another disaster movie about the sun."