Alex "Sandy" Antunes
Marc Kuchner built the Facebook group 'Marketing for Scientists' to help drag the usually reticent science population into this century's culture of social media and the rise of the individual.  Now out for pre-order is his book, "Marketing for Scientists: How to Shine in Tough Times", at Amazon:  http://amzn.to/kdK3Zf. The book's blurb:

It's a tough time to be a scientist: universities are shuttering science departments, federal funding agencies are facing flat budgets, and many newspapers have dropped their science sections altogether. But according to Marc Kuchner, this antiscience climate doesn't have to equal a career death knell-it just means scientists have to be savvier about promoting their work and themselves. In Marketing for Scientists, he provides clear, detailed advice about how to land a good job, win funding, and shape the public debate.

As an astrophysicist at NASA, Kuchner knows that "marketing" can seem like a superficial distraction, whether your daily work is searching for new planets or seeking a cure for cancer. In fact, he argues, it's a critical component of the modern scientific endeavor, not only advancing personal careers but also society's knowledge.

Kuchner approaches marketing as a science in itself. He translates theories about human interaction and sense of self into methods for building relationships-one of the most critical skills in any profession. And he explains how to brand yourself effectively-how to get articles published, give compelling presentations, use social media like Facebook and Twitter, and impress potential employers and funders.

Like any good scientist, Kuchner bases his conclusions on years of study and experimentation. In Marketing for Scientists, he distills the strategies needed to keep pace in a Web 2.0 world.

I enjoyed reading an early partial draft, and hope to have a more complete review later.  In particular I like his suggestion to pick an archetype that fits your public persona, then use that to hone your ability to deliver a message.  Okay, as they say, if you want to deliver a message, use Western Union.  But if you want to succeed as a career scientist, buy Marc's book. 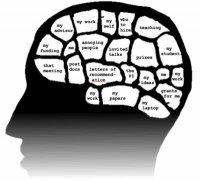