Enrico Dorigo
In Europe and worldwide the public attention to environmental protection is growing, together with research of new technologies and new solutions to reduce pollution sources, also in the field of energy and mobility.

However governments and public authorities often establish laws to improve the environment conditions, promising great results, without taking the trouble to provide and manage their actual effects, which in some cases even become the opposite of those expected.

The failure of the Italian government deserves to be mentioned as a glaring example, that in accordance with the directives of the European Community, starting from January 1st 2002, it had forbidden the marketing of leaded gasoline, called "super", that is gasoline containing Tetraethyl lead. For nine years they have not been providing any effective action that would promote, with the right mix of penalties and rewards, the quick replacement of all old cars without catalytic converter, in Italy also called “Euro zero” cars, with new cars equipped with catalytic converter, or their conversion to methane CH4 or to LPG (Liquid Propane Gas), supply systems which would allow polluting emissions even lower than those of cars self-catalyzed of first-generation (in Europe called “Euro 1”).

According to the data I have processed from the statistics made by the Automobile Club of Italy (ACI) on the lists of the Public Motor Vehicle Registry (PRA), in 2001 in Italy were circulating more than 12.2 million “Euro zero” cars, not counting motorcycle and business vehicles: the supply with unleaded gasoline for all these cars, and their prolonged use in the following years caused, as we will see, a very heavy worsening of polluting emissions.

The gasoline called "super" contained, as main ingredient anti-knock, tetraethyl lead, Pb(C2H5)4, recognized since its discovery by Thomas Midgley in 1921 as the most effective anti-knock between all the compounds then known

Tetraethyl lead, initially added to gasoline along with Pent carbonyl iron Fe(CO)5 and then to aromatic ammine aniline C6H7N, was used to upgrade the octane number of fuel, increasing with its anti-knock effect the pressure ratio withstood by the air-fuel mixture, to allow a higher supply of power of the engines.

Tetraethyl lead was recognized as a neurotoxic substance of very high concern, and in 1999 it joined in second place in the list of the Agency for Toxic Substances and Disease Registry of U.S.A.; it showed a great power of polluting of groundwater and of the ecosystem, because is non-degradable in any way, and capable of being accumulated at high speed in living organisms. Therefore leaded gasoline was gradually banned, first in the U.S. in 1986, then in Europe, since 2002, and replaced by the new unleaded gasoline.

It is well known that unleaded gasoline is certainly not devoid of noxious substances: it is composed, like leaded gasoline, of the traditional mixture of heavy hydrocarbons in open-chain derived from oil, but it contains as anti-knock, in place of tetraethyl lead, a mixture of monocyclic aromatic hydrocarbons in closed chain, including benzene C6H6., methyl tert-butyl ether C5H12O (MTBE) and ethyl tert-butyl ether C6H14O (ETBE) to the maximum extent of 40% allowed in Italy by Law n° 413 of 1997, then reduced to 35% by Legislative Decree n° 66 of 2005.

Since 1987 the International Agency for Research on Cancer (IARC), in supplement 7, inserts benzene in Group 1, the one of substances proved to be carcinogenic in humans; the International Programme on Chemical Safety - Poisons Information Monograph of 1999 states that an exposure of five to ten minutes at a rate of benzene of 2% in the air (or 20,000 ppm) is sufficient to bring an adult to death. In general, all aromatic hydrocarbons are considered potentially carcinogenic, and also the use of MBTE in gasoline was recently banned in the U.S., especially for its high capacity to pollute groundwater.

To sum up, to replace tetraethyl lead, which had a powerful anti-knock effect, larger amounts of aromatic hydrocarbons had to be added to unleaded gasoline, and these have increased the intrinsic toxicity; nevertheless these compounds were chosen because they were the best suited to be eliminated with the technologies available at that time of reducing emissions derived from vehicles, or catalytic converters of exhaust gas, also called "catalysts" that were required by law, that couldn't work with the presence of lead.

The catalyst, as I have learned from a chemistry research done for my school, is needed to break down the molecules of pollution contained in the unburned gases produced from the combustion, never fully complete, from the air-fuel mixture in the combustion chambers of the cylinders of the engine; in fact the perfect combustion of a hydrocarbon would produce only heat, carbon dioxide CO2 and water H2O; instead, the incomplete reaction with oxygen O2 in the combustion produces carbon monoxide CO and unburned hydrocarbons HC. In addition, in high temperatures and pressures oxygen can also burn nitrogen N2 of the air shaping small amounts of nitrogen oxides NOx.

The catalyst is used to complete the oxidation of unburned hydrocarbons HC and of carbon monoxide CO, making it capable to accelerate the chemical reaction with oxygen O2 through the precious metal catalysts, palladium Pd and platinum Pt, to convert them into carbon dioxide CO2, water H2O and heat , as in the perfect combustion.

The modern catalysts are called trivalent, because in addition to HC and CO, they are able to break down also the third pollutant, nitrogen oxides NOx: made by adding before the oxidation catalyst, a catalyst reducing agent, which through the rhodium Rh at temperatures between 300 ° C and 900 ° C, can reduce the unstable molecule of nitrogen oxide NO in nitrogen N2 and oxygen O2. The system is completed by so-called Lambda sensors, which detect the level of oxygen in the exhaust gases, and allow the electronic control unit of the car to maintain regular the gear between stoichiometric air and fuel introduced into combustion

Therefore it should have been clear that if the engine of a “Euro zero” car, without catalyst and lambda sensor, is fed with unleaded petrol, then all the toxic and carcinogenic substances contained into unburned gas of unleaded petrol, with no dampening, will be released into the atmosphere from its muffler.

Furthermore, these emissions are much higher in quantity than those resulting from the combustion of the old petrol with Tetraethyl lead, both because of the lower amount of this substance in the old gasoline due to its superior anti-knock effectiveness, and the worse working of the older engines designed for fuel with characteristics very different from those of the new unleaded petrol.

Only the City Council of Rome had the courage to impose, before the government issued the country-wide ban of marketing of leaded gasoline, a resolution (number 790 of 2001) which prohibited the traffic of all cars without catalyst for 24 hours a day and 365 days a year, at least inside the ring rail of the city, an area corresponding to one fifth of the inhabited territory of the city.

The Italian governments instead have never even tried to study an effective program to limit the traffic of “Euro zero” cars, and have stuck in the past nine years with the allocating of some state funding of incentives to the scrapping of old cars in case of purchase of new vehicles: these incentives were financed with sums from 1000 to 1500 euro (1400 to 2000 US dollars) for each car, an amount which would have been enough to impose at least the installation of an LPG or methane supply system to “Euro zero” cars for those who did not have the money to buy a new one!

Therefore the inaction of Italian governments has allowed, in reality, many of the cars without catalyst to remain in circulation without replacement or conversion by their owners, who were mostly the less well-off Italian citizens, more and more numerous for the economic crisis in recent years, or immigrants flocking to Italy from less developed countries, who bought them at a low price, and to whom “Euro zero” cars are the only private transport at an affordable price. 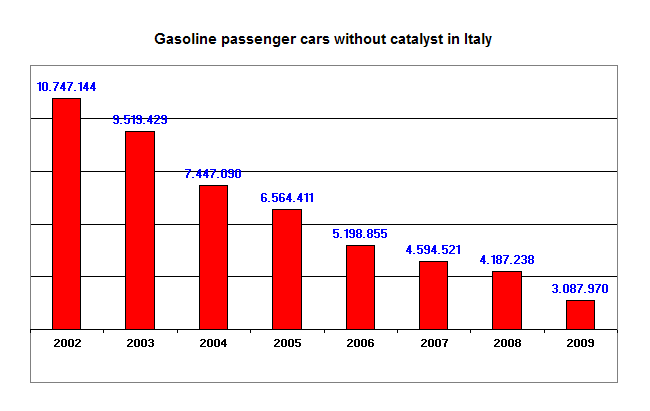 The largest difference in emissions per kilometre run by cars without catalytic converter compared to those with the catalyst can be calculated from the data above; furthermore, looking at its constancy in time, it is possible to understand how this absolutely avoidable pollution has been continuing for even four years after the 2001 - 2005 period I have taken into consideration. 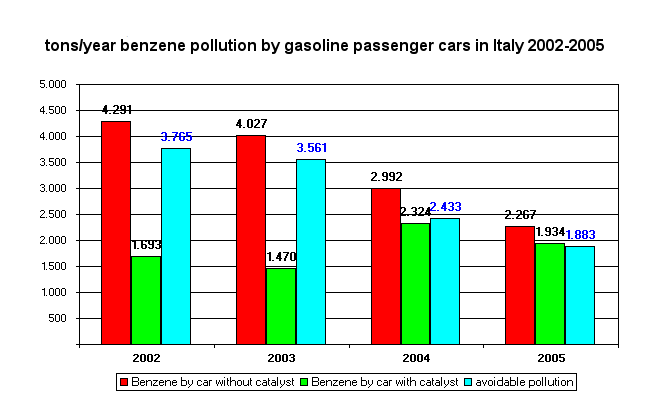 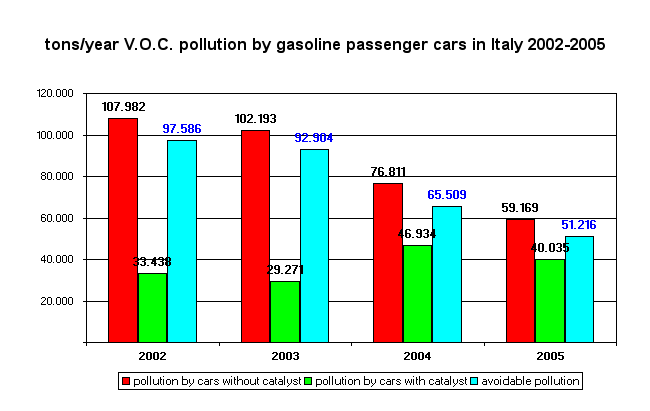 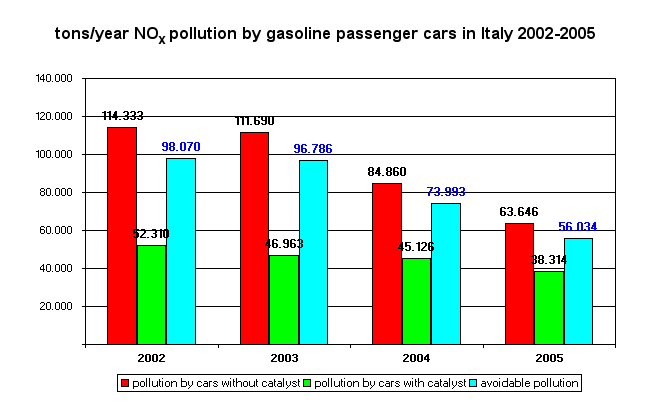 The same calculation stretched in subsequent years will show impressive data about the amounts of “avoidable pollutants” that could have been saved: 11,641 tons of benzene, 307,214 tons of VOC, 324,883 tons of nitrogen oxides NOx (see “total” column of Table 2).

By extrapolating the data mentioned above on the number of “Euro zero” cars circulating in Italy in the four-year period 2006 – 2009 we see that, having allowed the circulation of overall almost 50% of the “Euro zero” cars present in the four years 2002 - 2005, we can estimate that these cars have given off a similar percentage of the "avoidable pollutants" just discussed, and therefore it can be estimated with sufficient accuracy the total amount of pollutants that could have been saved in the past nine years since the abolition of leaded gasoline: more or less 17,000 ton. of benzene, 450,000 ton.of VOC, 480,000 ton. of nitrogen oxides!

I am an Italian student of 19 and I am from Venice. I am intrested in pollution and economical problems in general. I am currently studying Economics...