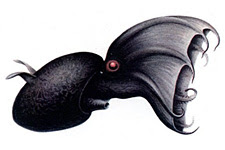 Its deep velvety black colour, huge red eyes and a webbing of skin connecting eight arms earned this animal the name Vampyroteuthis infernalis, which literally translated means ‘Vampire squid from hell’. It is a small, deep-sea animal, neither an octopus or a squid but a relative and phylogenetic relic or living fossil first described in 1903 by Carl Chun.

The vampire squid is an extremophile, living at depths from 600-900 meters (2,000-3,000 feet). Sunlight does not penetrate the darkness here, pressure is high and oxygen saturation is 3%. But the vampire squid is so beautifully adapted to its environment it manages to do more then just eke out a living, it thrives.

In order to cope with life in the suffocating oceanic, vampire squids have developed several radical adaptations. They have a very low rate of metabolism and instead of using haemoglobin to transport oxygen in their blood they use the more efficient compound haemocyanin, which colours their blood blue.

The vampire squid is covered in light-producing photophores over which the animal has great control. It is capable of producing disorienting flashes of light and can finely tune the size of the photophores as well as the intensity and frequency of flashes. If threatened, instead of ink, the vampire squid ejects a sticky cloud of bioluminescent mucus from the tips of its arms. This luminous barrage, which can last several minutes dazes predators and allows the animal to escape.

The Vampire squid is the soul extant member of the cephalopod order Vampyromorphida, which shares similarities with both squid and octopuses. Its relationships can be explored further on the Tree of Life website. Like many other deep sea animals it has no IUCN status as not enough is known about it to determine if it is a threatened species.