Danna Staaf
A couple of weeks ago ago, a debate about the existence of scavenging cephalopods broke out on the cephalopod mailing list. A few days later, such a creature appeared in the news as if conjured!

A grad student had e-mailed the ceph-list because he’d found a website that claimed “most cephalopods are active hunters while some are scavengers.” He couldn’t think of any scavenging cephalopods, and wanted to know if anyone else could.

The list’s eclectic mix of scientists, professional aquarists, and hobbyists was quick to respond. Our general conclusion was that most octopuses will eat freshly dead or frozen food--handy for those who keep them in captivity, but hardly qualifying them as full-fledged scavengers. Wild octopuses, squid, and cuttlefish are undeniably predators first, and opportunists second.

One has to remember, though, that octopuses, squid, and cuttlefish aren't the only cephalopods around. What about the chambered nautilus? Compared to its cousins, it is a slow swimmer with poor vision—not good traits for a hunter. Little is known about its diet, but James Wood pointed out that the nautilus may well use its sense of smell to scavenge dead food.

However, the nautilus is always the odd one out. Nautiloids parted ways from the ancesters of other cephalopods over 470 million years ago. So let's forget about them. That leaves us with the octopus, squid, and cuttlefish—very modern cephalopods who lost their shells, grew big brains and eyes, and now prowl the seas as active predators.

Except, apparently, for the vampire squid.

Oh, Vampyroteuthis infernalis is shell-less, all right. And it's got a good-size brain and enormous baby blues. But Henk-Jan Hoving and Bruce Robison of MBARI have just published proof conclusive, in the (sadly paywalled) journal Proceedings of the Royal Society B, that vampire squid aren't hunters at all (much less blood-suckers). Instead, they sit hundreds of meters below the sea surface and eat the refuse that falls from above—carcasses, cast-off mucus nets, and feces. Mmm, refuse! Vampire squid always have to be different from everyone else, it seems. Just as an example: they have two sets of fins, a juvenile pair and an adult pair, and they go through a four-fin stage after the adult set comes in and before they've deconstructed the juvenile ones. No other cephalopod does anything remotely like it.

And yet in a curious way, this new knowledge about the vampire squid's feeding strategy actually ties it more closely to its relatives. Nestled in pockets between two pairs of their eight arms, vampire squid possess two long slender filaments that have puzzled researchers since they were first discovered. They were tentatively identified as sensory structures, gathering information about the animal's environment and feeding it back to the brain.

But now they are found to feed the squid much more directly, by acting as sticky fishing lines to collect all that falling garbage. This job closely matches that of the feeding tentacles of squid and cuttlefish. Both filaments and tentacles are highly elastic, and both capture food which is then brought back to the arms and transferred to the mouth.

All modern (non-nautilus) cephalopods evolved from an ancestor who had ten equal arms. One pair of these arms was modified into the feeding tentacles of squid and cuttlefish, while one pair (most likely a different pair) was lost entirely in the octopus. In the case of Vampyroteuthis, another pair (probably not the same as the tentacle pair OR the lost pair) was modified into the feeding filaments*. 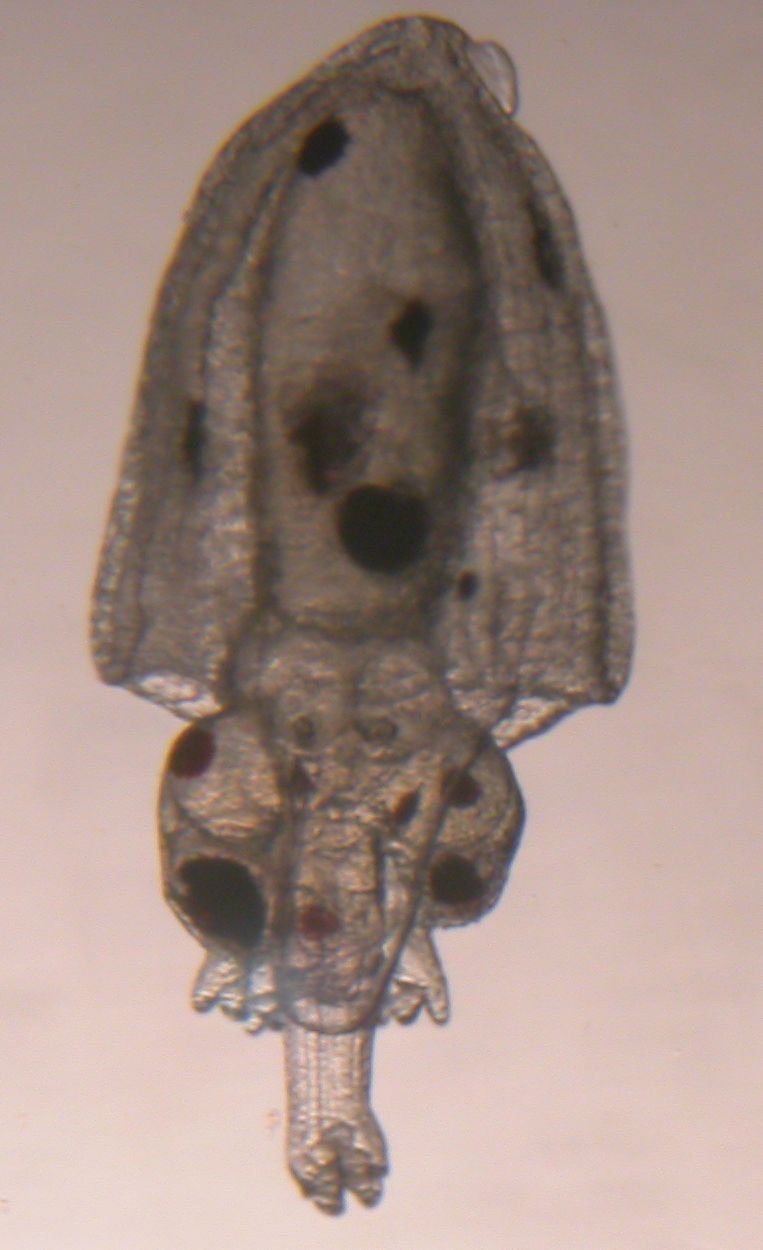 Speaking of peculiar arm modifications reminds me of the babies of a particular family of squid, the ommastrephids, who actually hatch with their future tentacles fused into a single elastic structure called a proboscis. After a few weeks, the proboscis “unzips” into two adult tentacles, which the squid can then use for prey capture. But the diet of the proboscis stage is virtually unknown.

One theory about these babies' eating habits is oddly reminiscent of what Hoving and Robison observed in vampire squid. Vampires secrete mucus from the arms and use it to wrap up their collected detritus, creating a “food bolus” that is easy to consume. Back in 1998, Erica Vidal and Manuel Haimovici proposed that baby ommastrephids might collect itty-bitty detritus in the mucus that covers their body, then wrap it into a ball with the proboscis and transfer it to the mouth. There's been no further work on the idea (these tiny little squid are incredibly recalcitrant laboratory subjects) but it would be pretty crazy if it turns out to be true, and ommastrephid squid (which are voracious predators as adults) are actually scavengers as babies!

Till then, though, Vampyroteuthis remains the only claimant to the title of Scavenging Cephalopod. Should we make a trophy?

* I originally worded this section carelessly so as to imply that the same arm pair was modified/lost in all cases. Thanks to Ralf Muschall for correcting it!
Squid A Day
More Articles All Articles
About