Syllipsimopodi Bideni: An Octopus With 10 Arms Pushes Back The Age Of Vampyropoda By Nearly 82 Million Years
By News Staff | March 9th 2022 09:33 AM | Print | E-mail

News Staff
A recent study describes a new species of vampyropod based on a 328-million-year-old fossil and pushes back the age of the group by nearly 82 million years. And shows that the oldest ancestors of the group of animals that includes octopuses and vampire squids had not eight but 10 arms.

Vampyropods are soft-bodied cephalopods typically characterized by eight arms and an internalized chitinous shell or fin supports. Because they lack hard structures, Vampyropoda are not well represented in the fossil record. The new study is based on a vampyropod fossil from the collections of the Royal Ontario Museum. It was originally discovered in Montana and donated to the museum in 1988.

The authors identified the fossil specimen as a completely new genus and species that dates to about 328 million years old, making it the oldest known vampyropod and extending the fossil record of the group by about 82 million years. In the new study, they also describe its 10 arms—all with preserved suckers—corroborating previous scientific arguments that the common ancestor of vampyropods had 10 arms as well. 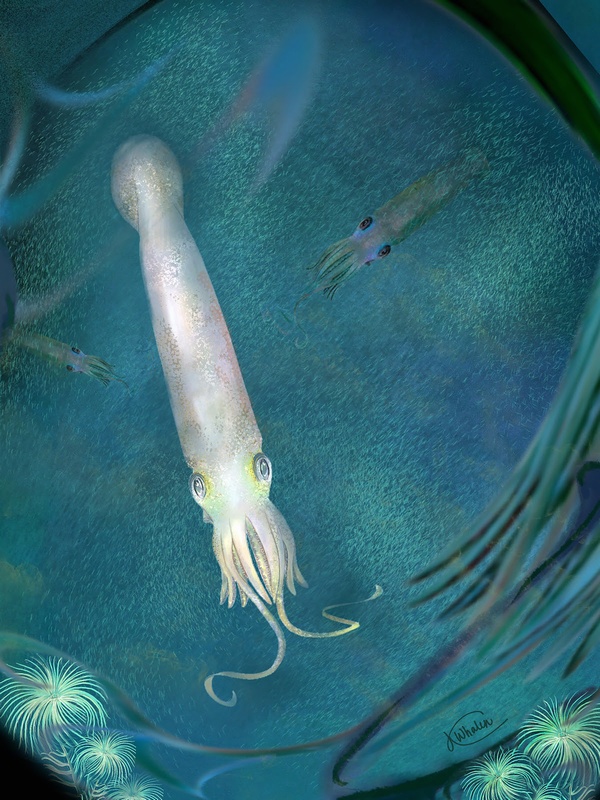 "The arm count is one of the defining characteristics separating the 10-armed squid and cuttlefish line (Decabrachia) from the eight-armed octopus and vampire squid line (Vampyropoda). We have long understood that octopuses achieve the eight-arm count through elimination of the two filaments of vampire squid, and that these filaments are vestigial arms,” said lead author Dr. Christopher Whalen, a postdoctoral researcher at the American Museum of Natural History and Yale. “However, all previously reported fossil vampyropods preserving the appendages only have 8 arms, so this fossil is arguably the first confirmation of the idea that all cephalopods ancestrally possessed 10 arms.”

Two of the cephalopod’s arms appear to have been elongated relative to the other eight arms, and its torpedo-shaped body is reminiscent of today’s squids. The fossil was given the name Syllipsimopodi bideni. The genus name is derived from the Greek word “syllípsimos” for “prehensile” and “pódi” for “foot”—because this is the oldest known cephalopod to develop suckers, allowing the arms, which are modifications of the molluscan foot, to better grasp prey and other objects. The species name is to honor the 46th President of the United States, Joseph R. Biden.

“Syllipsimopodi may have filled a niche more similar to extant squids, a midlevel aquatic predator,” said coauthor Neil Landman, former curator at AMNH. “It is not inconceivable that it might have used its sucker-laden arms to pry small ammonoids out of their shells or ventured more inshore to prey on brachiopods, bivalves, or other shelled marine animals.”

Based on the age, characters, and phylogenetic position, the fossil challenges the predominant arguments for vampyropod origins, and the authors propose a new model for coleoid (internally shelled cephalopod) evolution.
News Articles
More Articles All Articles
About