Danna Staaf
Guess who’s not being displayed in the Monterey Bay Aquarium's new "Tentacles" exhibit, opening April 12? Who is just too difficult for this award-winning institution to handle?

Flashy tropical octopuses are all showing up for work. The world's smallest cephalopod is on the billing. Even specimens of the deep sea are likely to make an appearance.

So who's the diva too delicate to display? Local squids. As a California squid biologist, I take a perverse sort of pride in that. Although, our geography's not really special, it's just that our two squid species happen to be pelagic: inhabiting the vast blue expanse of open ocean, rather than hunkering down in the sand or hanging around seaweeds.

It's a lot easier to fill a tank with sand or seaweeds than to recreate the open ocean environment in something that isn't, well, open. Still, the Aquarium has managed to display other pelagics, like tuna and jellies. The problem is that squids are both fast and active like tuna AND soft and delicate like jellies. They're likely to brush against a wall or filter, and that's likely to lead to injury, infection, and death.

So the only squids* that will show up in "Tentacles" are benthic, like the dear little pygmies who glue themselves onto seagrasses. It's at once frustrating and awesome to learn that some animals are just too wild to be displayed. 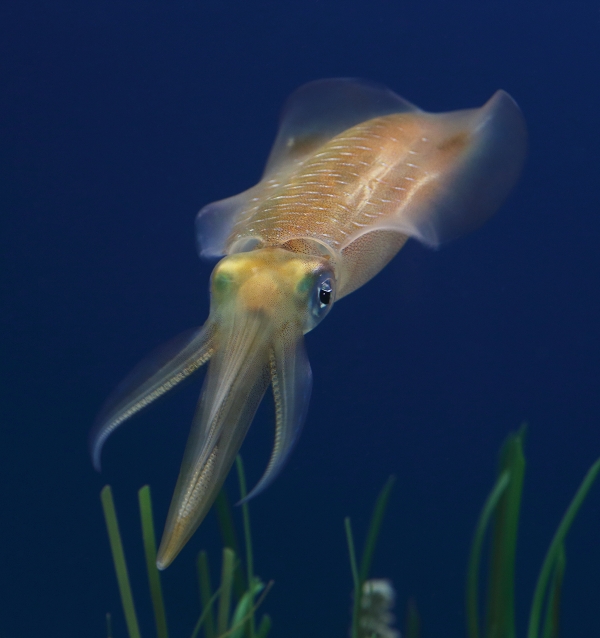 But the full title of "Tentacles: The Astounding Lives of Octopuses, Squid, and Cuttlefishes" features a different choice. The Aquarium's communications director told me that this was discussed in great depth, but wasn't able to tell me the rationale behind the final decision.

As long as I'm quibbling semantics, I can't help noting that octopuses don't technically have tentacles. Squids and cuttlefishes have eight arms and two tentacles; octopuses have eight arms and zero tentacles. I guess "Arms" doesn't sound so exciting. Plus the exhibit includes nautiluses (even though they're snubbed in the title), which have 60-90 tentacles and zero arms. A truly inclusive title would have to be "Arms and Tentacles" . . . or, as my husband suggested, "Appendages." Now that's a crowd draw!
Squid A Day
More Articles All Articles
About