Sushi Selection Criteria: What Choices Are Good For You AND The Environment?
By Kimberly Crandell | October 23rd 2008 01:44 AM | Print | E-mail

Kimberly Crandell
Making a selection at a sushi bar used to simply be about deciding how adventurous you wanted to be, and making sure to steer clear of the deadly poisonous puffer fish (unless you really trusted your sushi chef).  But now a whole new list of selection criteria has come into play --  based less on which fish is most appetizing, and more on which fish is most sustainable. 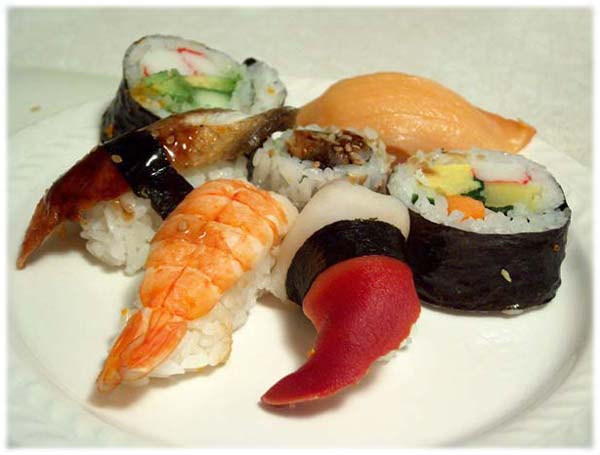 Beginning today, sushi lovers nationwide will have a way to make seafood choices that please the palate and safeguard the world’s ocean wildlife. Three leading ocean conservation organizations –Blue Ocean Institute, Environmental Defense Fund and the Monterey Bay Aquarium – have created color-coded consumer guides ranking popular sushi selections based on whether they are prepared using seafood that’s caught or farmed in ways that harm the ocean or pose a health risk to people.

While the consumer guides – in print, online and mobile device versions – differ in appearance, they are based on similar data and are designed to deliver one consistent message: Sushi choices by individual consumers have an impact on the future of the ocean.

“These new guides not only enable sushi lovers to choose fish that are caught or farmed responsibly, they also highlight selections that are healthy for them and their families,” said Tim Fitzgerald, marine scientist for Environmental Defense Fund.

Unfortunately for sushi lovers, some of the standard favorites are now listed as choices to avoid, including: imported ebi (shrimp), unagi (freshwater eel), tako (octopus), farmed sake (salmon), and Japanese farmed hamachi (yellowtail).  These species are either overfished, farmed with aquaculture methods that pollute the ocean, or caught using methods that destroy ocean habitats or kill large amounts of other sea life. Items like wild-caught Alaska salmon (sake), farmed scallops (hotate) and Pacific halibut (hirame) are more sustainable choices, in part because they come from abundant, well-managed fisheries -- or in the case of scallops, are raised using sustainable aquaculture methods.

All three guides offer a substantially consistent message about the best selections, as well as the fish to avoid when choosing sushi.  “While we consider similar factors in assessing each fishery, we each tabulate the environmental information in slightly different ways,” said Kate McLaughlin, Blue Ocean Institute’s Seafood Program Director. “That results in subtle variations for a handful of rankings.”

“The differences are minor,”  said Sheila Bowman, Seafood Watch outreach manager at the Monterey Bay Aquarium.  “Regardless of which sushi guide people rely on, everyone from chefs to consumers now has a very clear picture of what their sushi choices mean for ocean wildlife.”  All three guides  also incorporate human health recommendations from Environmental Defense Fund, and fish that contain levels of mercury or PCBs that may pose a health risk to adults or children are flagged.

So what does our new "sushi selection" look like?  Although each list does differ slightly, here's an overview of some of the "Best", "OK", and "Worst" choices:

No word yet on how we're supposed to know the origin and harvesting method of the offerings at our local sushi restaurant.  Maybe that's phase 2.0?