Danna Staaf
I've got nothing at all against chefs. I'm just suggesting that when a restauranteur and TV personality says something like

“Squid is now the dominant species in the Pacific,” Cosentino says. “The waters have changed.”

. . . then you might want to fact-check with an actual oceanographer. Or, say, a squid biologist.

The quote is from a piece in Men's Journal called Save the Ocean, Eat A Squid--a title guaranteed to raise my hackles. The article documents chef Chris Cosentino's fishing trip to collect Humboldt squid, which he then cooks up for patrons of his San Francisco restaurant.

Cosentino's interest in serving Humboldt squid is framed in the context of the species' recent range expansion, and their possible status as an invasive species.

Ten years ago, the beasts were confined to Mexico’s west coast, but ocean waters warmed by climate change are believed to have lured them north. Here, off the Northern California coast, the Humboldt have found a whole ocean largely fished out of predators like bluefin tuna and salmon. Humboldt spawn quickly and eat voraciously. By some estimates, there are now tens of millions of them in the northern Pacific, all intent on devouring some of the fishing industry’s smaller traditional catch, like hake and anchovies. It’s a big problem that moves up the food chain and could impact greater varieties of seafood.

The idea of warmer water bringing squid north could be anywhere from simplistic to plain wrong. Biologists (including Julie Stewart, heroine of the recent book Kraken) are still actively trying to figure out what makes the squid move where they do. I know it's frustrating to keep hearing "We don't really know," but . . . we don't really know.

What about the importance of "a whole ocean largely fished out of predators like bluefin tuna and salmon"? It's a bold claim, to be sure. Tuna certainly like to eat Humboldt squid; that's incontrovertible. Researchers Zeidberg and Robison suggested that overfishing of tuna might have allowed their squid prey to go forth and multiply, but the idea has been challenged by other scientists. So . . . jury's still out.

Salmon, meanwhile, are not at all in the same class of predator as bluefin tuna. If anything, Humboldt squid eat salmon, not the other way around. Northern California salmon are certainly not doing too well, but it's kind of weird to imagine that lower salmon abundance could have encouraged the expansion of Humboldt squid. 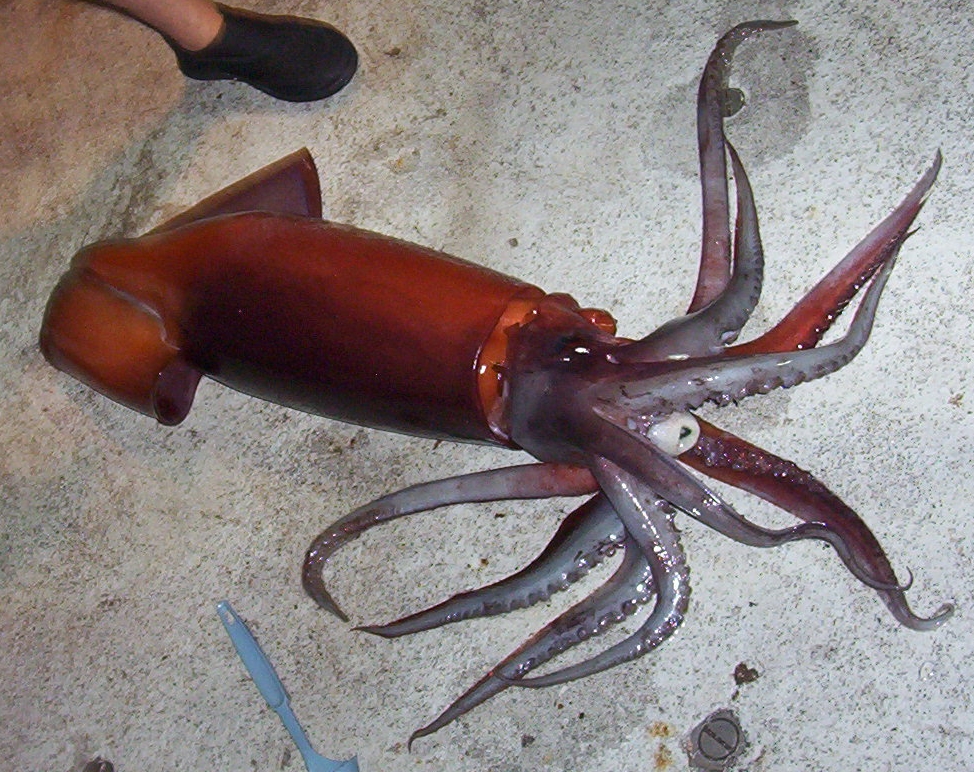 "By some estimates, there are now tens of millions of them"--indeed. (That was an indignant "indeed," in case you couldn't tell.) Whose estimates exactly? I don't know of any reliable estimates of how many Humboldt squid are out there.

Finally, yes, there is evidence that Humboldts have impacted hake off the California coast. Never heard anything about anchovies, though.

Is the Humboldt squid an invasive species? Possibly.

Is it the "dominant species in the Pacific"? Not a chance.
Squid A Day
More Articles All Articles
About