Camilo Tabinas
This is the first of a series of lessons about chemical bonds.  The purpose of publishing this through Science 2.0 is to solicit comments and suggestions prior to a formal proposal for its use in the general chemistry classes particularly, in the junior high school science.  I will appreciate if one can point out any oversimplification that may lead to misconceptions.  Another purpose is for this to be used as a review material for non-chemistry major students enrolled in general chemistry.
Chemical bonds is one of the topics assigned to Grade 9 Science by the Philippine Department of Education (DepEd).

As to the title, the word "manuscript"  is used instead of "draft" just for convenience . Strictly speaking, this document ceased to be a manuscript because of its publication and be described appropriately as draft.

REVIEW ON ATOMIC STRUCTURE AND THE PERIODIC TABLE

N.B.  In this part of the module,  the teacher is required to discuss  and clarify the concepts  of atomic structure and the use of the periodic table to the students..

Hello!  You are at ground zero. Here, the module with help you understand the world of chemical bonding.  Bonding, can be understood, as a sort of doing something together ( enjoying together) with family members  and friends. Merriam Webster defines bonding as "the formation of relationship" also "the attaching of a material." In short, bonding is a form of attachment.  One being emotionally attached with friends or with family members and, as a result, one feels relax and happy.  Similarly, atoms (though they do not have emotions) in order to become stable,  they bond with each other.  Atoms do their bondings by either sharing its outermost electrons (covalent bonding) or by making themselves charged ( + or -) through the transfer of their outermost electrons (ionic bonding). Ok ok ok, but before you feel sleepy and to have a better understanding of chemical bonding, let us look at  the atom first.   What is an atom? Has anyone seen an atom? Interesting isn’t it?

1.1 A Review about the Atom

In the 1800’s  John Dalton proposed that an atom is spherical in shape and massive. We can compare his proposed atom as that of a massive billiard ball.  It was only in the 1980’s with the use of an electron microscope called scanning tunneling electron microscope (STM) that scientists were able to get a picture of an atom.  Indeed, Dalton was right. Atom has spherical shape.  Other experiments, however, such as that of Rutherford’s experiment proved that an atom is NOT massive as described by Dalton.

Atom is the smallest particle of an element. This means an element has atoms of the same kind, that is, of the same atomic number.. For example, a  phosphorus element has phosphorus atoms ( atoms of the same atomic number, but with different atomic mass-called Isotopes). We can say that if you subdivide an element (e.g. a pure gold bar) into  its smallest portion, you will end up with  a particle that is a representative of that element, the atom.  The atom is so tiny that it cannot be seen by our naked eyes so that an individual atom has no color, only visible objects (those that can be seen) have colors.  However, many atoms bonded together form bigger particles big enough to be seen with colors such as a silver element with brilliant gray color, gold element that has a metallic yellow color, etc. Also, when atoms are excited and go back to their original state (ground state) , they can emit characteristic colors such as in flame test ( sodium gives a yellow flame, copper bluish green, calcium brick red, etc.)

Interesting to note, the first (on record) to think of dividing an object into its smallest portion is a philosopher named Leucippus. Later, Democritus called the smallest particle of an object “atomos.”

There are other particles in an atom, but we will only take up the three principal subatomic particles of an atom, the proton, neutron, and electron.  This is because knowing them will lead us to a better understanding of how atoms join together to form compounds.

1.12  Where exactly is an electron? Heisenberg Uncertainty Principle

Heisenberg Uncertainty Principle simply states that no one can exactly measure the position  and momentum (quantity of motion) of an electron at the same time.  Thus, we can only say, electrons are somewhere outside the nucleus.

Neils Bohr model of an atom,  the micro-planetary system, no longer holds true.  It is now replaced by the electron cloud model, owing to Heisenberg Uncertainty Principle and Schrodinger wave equation.

1.13  Highest probability of finding an electron.

So, where can we find Robert with the highest probability?

In an atom, the spaces where electrons can possibly be found are given names.  They are the energy level (school), sublevel (building), and orbital (classroom).

So, at highest probability, where can we find an electron?

.Practice Task 1-A  Understanding the Atom

A.  Fill in the blanks in the paragraph below with the correct answer. Choices are given inside the parentheses. Write your answers in the blanks provided.

B.  Based on your understanding of the shape of an atom, draw or sketch  an atom showing the nucleus, protons, electrons, and neutrons. ( First, recall the following; the shape of atom according to Dalton, the location of the nucleus and energy shells in an atom, and the location of the protons, neutrons and electrons. Now, start drawing on the space below.  Do not be afraid that your drawing will not look  good because “if it is yours, it must be good!!!”

C.  Given pictures (from the teacher) of Bohr Model and  Electron Cloud Model of atom, describe how the two models differ from each other and give reasons for the differences.

1.20 Review about the Periodic Table

Note:  Be ready with your periodic table 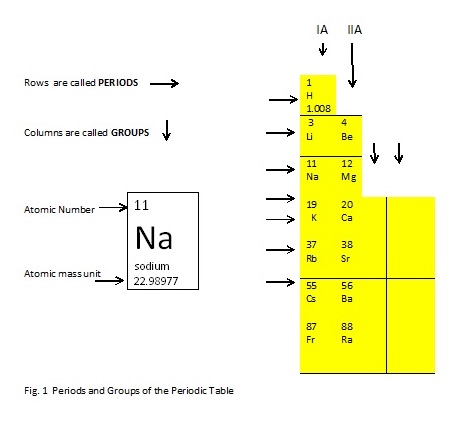 Refer to Fig. 1 above, complete the table below by writing the period number, group number, number of energy shells, and number of valence electrons.

1.22 The Periodic Law and Periodic Table

A Periodic Table is a list of elements arranged according to similar properties (in vertical columns) and thus, arranged in increasing atomic number.

Following the first two examples in the table, complete the table below by writing the  atomic mass unit and mass number of atoms  of Magnesium (Mg) and Potassium (K). Refer to Fig. 1 above

Following the examples in the Table, complete the table by writing the number of neutrons, mass number and atomic number(Refer to Fig. 1 above)

1.24 Division in the Periodic Table

Groups are also called families.  The following are the representative elements or the Group A elements:

1.  Group IA  is the Alkali metals

3.  Group IIIA is the Boron family

4.  Group IV A is the Carbon family

5.  Group V is the Nitrogen family

6   Group VI is the Oxygen family

7.  Group VII  is the Halogen family 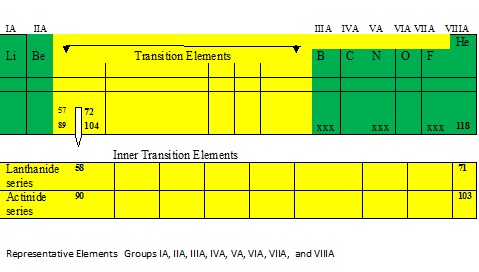 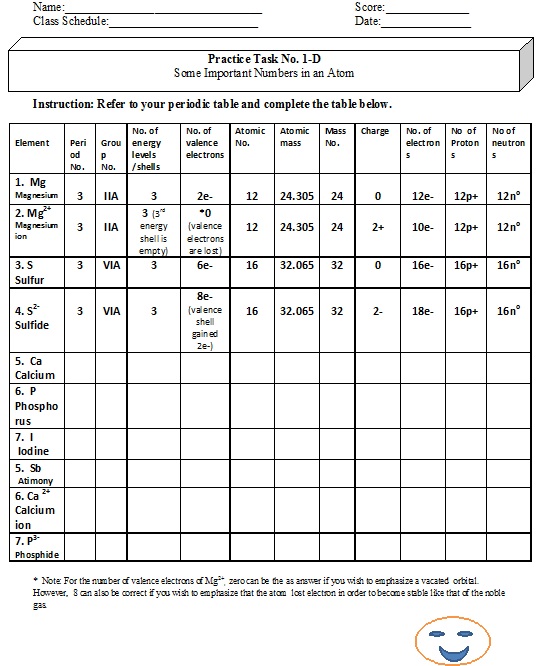 *  Note: For the number of valence electrons of Mg2+,  zero can be the  as answer if you wish to emphasize a vacated  orbital.   However,  8 can also be correct if you wish to emphasize that the atom  lost electron in order to become stable like that of the noble gas. However, I prefer "zero" as answer to indicate lost of valence electrons as it is a cation.

PERFECT!!!  CONGRATULATIONS! YOU MADE IT.

He is both a chemist and an educator. He teaches General chemistry, organic, and biochemistry for health sciences students as well as introductory...