Richard Mankiewicz
In 2002 Grigori Perelman started to publish his proof of the Poincare Conjecture. Shunning peer-reviewed journals he published directly on arXiv. In 2006 he was awarded the Fields Medal for his achievement, and became the first ever mathematician to refuse the prize. Last week, the Clay Mathematics Institute awarded him the $1 million that went with cracking one of their seven Millennium Prize Problems. It looks as if he is turning his back on this too. 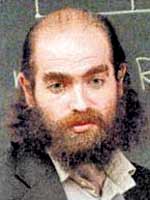 He now lives the life of a semi-recluse and has walked away from mathematics. Back in 1982 the young Perelman won gold medal at the International Mathematics Olympiad for a perfect score. He joined the prestigious Steklov Institute of Mathematics in St Petersburg and was accepted as a mathematical prodigy.

But something happened, probably around 1995 after returning to St Petersburg from a spell in the USA. He started to turn into a recluse within the Steklov Institute, so much so that some colleagues thought he had already abandoned mathematics. But no, his life had been overwhelmed with one problem and he was determined to solve it, even if that meant abandoning social protocols. He left the Institute whilst finishing to publish his proof and appears to be living a life in poverty with his mother. 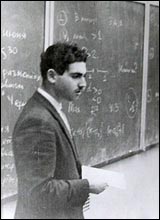 A life dedicated to thinking - thinking hard about hard problems - can put a strain on the whole person. I recall at university the subjects with the highest casualty rates in terms of burn-out were philosophy, mathematics and physics. I am not surprised that Grigori can no longer stomach even the sight of mathematics. The photos of a reclusive, dishevelled mathematical genius add to the public's stereotyping of an other-worldly insanity that comes to some scientists. This view goes all the way back to Pythagoras and Archimedes and is hard to shake off.

But I think the Clay Institute should do an honourable thing and rise above the snub: find a way for Perelman to enjoy the money that he has richly deserved, even if that means him growing mushrooms.
Florilegium
More Articles All Articles
About