Can Neurons Communicate At A Distance With Electromagnetic Signals?
By Richard Mankiewicz | March 12th 2010 01:11 AM | Print | E-mail

Richard Mankiewicz
I've been pondering this for some time and have just now been fired into action by a comment I made in another article “Building  Smarter Artificial Intelligence  By... Shrinking the Body?” One approach to artificial intelligence is to model the activities of neurons as electrical circuits with multiple inputs and multiple outputs. The model assumes that each individual neuron affects only those other neurons with which it has direct contact at the synapses. But, we also know that an electrical signal will also generate an electromagnetic field. We know the brain as a whole does this as we have both electroencephalograms (EEG) and magnetoencephalograms (MEG) that can measure the electrical and magnetic activities of the brain. So, the question I wish to raise is: Can neurons communicate with each other through their electromagnetic signals as well as through their synapses?

This is actually four questions: can an electromagnetic field activate a neuron?; does an activated neuron generate an electromagnetic field?; is that field strong enough to affect neighbouring neurons?; and is that effect strong enough to carry information? Like I said above, we know that the brain as a whole generates an EM field, so much so that the standard EEG is able to measure fields that have passed through the skull. But more recent research with intracranial EEGs has revealed a wealth of high frequency activities that are damped out by the skull. Let's firstly take a very quick look at a neuron.

The brain and nervous system are wonderfully complex structures whose activities are modelled on the interactions of neurons. Although there are exceptions, the basic neuron has multiple inputs (dendrites) and multiple outputs (one axon with branches). Neurons are connected to each other by synapses. The signal that passes across the synapse can be either chemical (employing a neurotransmitter) or electrical. The signal that passes along a neuron is known as an ion pump as it is created by the movement of electrically charged ions across the neuron's membrane. The signals from the input dendrites are additive and the output axon is only triggered if a minimum activation potential is reached – input signals that are too weak are thus ignored. It is therefore tempting, as a first iteration, to model the information processing capacities of neurons as a complicated sequence of logic gates connected together by conducting wires. However, with an average of one hundred billion neurons, each with an average of 7,000 synaptic connection, the average cranial computer has about 400 trillion connections. This in itself is an onerous task to model. 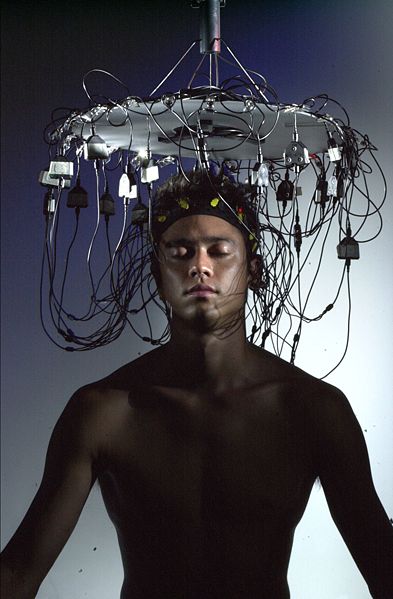 But the brain is not a mass of insulated wires; its electromagnetic activity leaks out enough to be measurable. The average signal measured by a typical EEG is about 10-100 microV compared to 10-20 milliV for a subdural probe – that's over 100 times stronger. The magnetic fields produced by the brain are much weaker and useful measurements have only been possible since the invention of SQUIDs (superconducting quantum interference devices). However, at 10 femtoTeslas (fT) for cortical activity and 103 fT for the human alpha rhythm, the brain's magnetic field is somewhat smaller than the ambient magnetic noise in an urban environment, which is on the order of 108 fT. Great care is needed in such research to screen the room from as much EM radiation as possible.

It is thought that these fields are generated from the current flowing through each neuron; EEGs are considered to be the result of extracellular currents along dendrites whereas MEGs are due to intracellular ionic currents. However, these signals are averages of the activities of individual neurons; they are the emergent behaviour of billions of neurons - it is thought that about 50,000 neurons are needed to produce a measurable signal with current equipment. Much more research needs to be done in this area. The magnetic signals, in particular, are very weak, and it is currently impossible to isolate the signal of an individual neuron. However, to answer our second question, neurons do produce electromagnetic fields that extend beyond their physical structure.

It is time to look at what's actually thought to be going on at the level of the single neuron. The paper “Electric and magnetic fields inside neurons and their impact upon the cytoskeletal microtubules” is, I think, very useful in that although rather long it explains some basic electromagnetic theory along the way. It discusses the electromagnetic fields in dendrites, axons and soma, as well as the propagation of the ionic current and the electromagnetic effects at the synapses. Its main focus, however, is on giving a plausible theory on how microtubules may also be able to transmit information. There are still a lot of unknowns and a lot of research to be done. The authors reject outright the ferroelectric model of neurons as these ionic currents are very different to the electron currents in a metal conductor. The EM fields generated are much smaller than would be expected by a current due to a physical flow of charged particles.

What the paper actually focusses on are the interactions between EM fields and the cytoskeleton of a neuron, most importantly the microtubules. That electromagnetic inputs to the cortex have been shown to affect consciousness is proof that neurons can process an EM signal on its own as imparting information. The case of a blind man able to partially see through a camera connected via computer to electrodes implanted directly into his visual cortex goes all the way back to 1978. There was also an experiment in 1988 showing that two unconnected neurons would oscillate synchronously with an applied electric field. This is linked to the controversial topic of the 40Hz gamma wave signal that originates in the thalamus and sweeps across the brain like a metronome. The speed of this signal appears to be too fast to be carried by the ionic neural signal and therefore it seems plausible to look for an alternative. We can therefore answer our first question in the positive; that EM fields external to a neuron can activate that neuron as if it had received a signal from its dendritic inputs. The final, and most fascinating, questions are whether the EM fields created by neuronal activity can thereby send signals and information to neighbouring neurons without going through a synaptic information exchange. This could be with neurons with which it has no connections with or it could strengthen, or attenuate, the synaptic signal.

I will try my best to summarize the above paper and then look at possible ways forward. Many people assume that there is no, or little EM field outside the neuron because of the insulating myelin sheath. However, that sheath only covers the axons, not the dendrites, and secondly it is not a continuous sheath (like around an electrical cable) but is a string of small sheaths with gaps in between them. This apparently allows for better conductivity in pulses but also means there is ionic activity at these nodes of Ranvier. The paper calculates that the electric fields generated by a neuron are of significant magnitude but that the magnetic fields are too small to affect even the signal transmission within a neuron, never mind propagating extraneuronally. 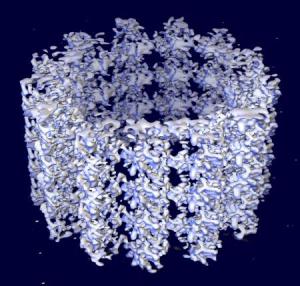 However, the dendrites especially can both produce and react to fluctuating electric fields. For the moment, the answer to our third question is partially positive, although we have left unanswered how the measurable magnetic fields are produced. The paper then has a long section describing the structure of microtubules and their component tubulins.

Microtubules are part of a neuron's exoskeleton and are polymer tubes of tubulin, which exists as two polarized isomers. Imagine the microtubules as having three layers with the inner and outer layers negatively charged whereas the middle layer is positively charged. The paper puts forward a method by which tubulins can propagate a wave along the microtubules, combining electromagnetic properties with known biochemical ones. This is more than just a supportive structure and, as at the end it connects to the presynapse in axons it may be able to transmit its information to the next neuron. Experiments on microtubules have also discovered some astonishing properties, such as that they are able to propagate elastic waves at up to the Gigahertz range as well as acoustic waves up to 600 m/s. Also, as the microtubules are charged they may also show piezoelectric effects. These latter discoveries remain to be put into a coherent picture. Why a neuron would have two different modes of signal transmission is a mystery. Perhaps they are different facets of the same signal or perhaps it some kind of checksum to verify that the axonal signal is not a false positive. Pure speculation at this point.

All of this is tantalising but there are serious experimental difficulties in moving forward, not least of which is getting live data as there are laws against sticking probes into living people's brains. We are thereby forced to speculate based on the signals detected at the surface of the brain. Both electric and magnetic fields are measurable as emergent phenomena, but how a single neuron resonates within a nearby bundle is unknown but must surely involve EM propagation. Although the magnetic fields appear to be tiny for an individual neuron they become significant and measurable for resonating bundles. The quoted paper does not look at resonance effects which could be significant even at low field strengths. The subject of stochastic resonance is very recent but, I think, should yield some insights about a non-linear system like the brain and the importance of extracting valid signals from background noise. The 40 Hz electrical signal must have some purpose, whether the cause of consciousness or not, and therefore neurons must have the ability to respond to it. This is an area in which physics and neurology come together to further our understanding. But coming back to the original stimulus of a discussion about AI, I think that modelling the brain as mere physical connections of neurons (be they biochemical or electrical) is doomed to failure unless it also includes emergent extraneuronal phenomena such as electric and magnetic fields. The answer to our last question has to be: probably yes but more work needed!