Richard Mankiewicz
Alice wants to play a game with Bill. She has just bought some new and rather strange dice. The average of each die is 3.5, just like a normal playing die, but the numbers on each face have an unfamiliar distribution.

The game itself is very simple: whoever rolls the highest total wins a sweet from the candy box. If the box becomes empty, the winner can take one from the other player’s pile.

If they each play with 3 dice of the same kind, which is the best set to have?

Is it possible to construct a die R that can beat both P and Q and still have a mean of 3.5? 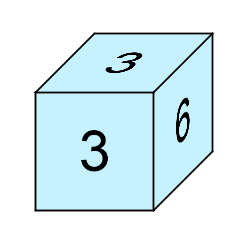