Richard Mankiewicz
It is somewhat surreal to see the discovery of the largest prime number paraded on prime time broadcast media. Mathematicians around the world are asked to explain the significance of this discovery in layman’s terms, which is up there with physicists trying to explain what the Large Hadron Collider actually does.

Below you’ll see a pretty sparky Sky News interview by Eugenia Cheng, a senior lecturer at the University of Sheffield. Just notice at the very end how jolly pleased with themselves the newscasters seem to be.

The new record was discovered by Dr Curtis Cooper at the University of Central Missouri. This is the third time that Dr Cooper has entered the record books; and one must hope that he is using his university’s spare computing power to do so. Indeed, this discovery was not done in isolation but as part of a global internet project known as GIMPS (Great Internet Mersenne Prime Search). You too can join in; just go to the GIMPS website, sign up, download the software and you’re up and running; or rather, your computer will be.

There have been numerous news articles about this discovery; I have no wish to tread the same ground. In this case the prime news is to promote ‘citizen mathematicians’ who wish to participate in discovering new primes. And although records make news, one must not forget that between one highest prime and the next there could be acres of barren unexplored numberland waiting for the right person to find another prime gem.

The reason for this is that prime numbers are generated using different recipes. GIMPS is searching for Mersenne primes, which have the form 2p-1 where p is itself prime. But there are other types of primes and other online research platforms. PrimeGrid is another distributed computing project that actually runs a number of different algorithms in search of different kinds of primes. I’ll let PrimeGrid explain itself:

“PrimeGrid's primary goal is to bring the excitement of prime finding to the "everyday" computer user. By simply downloading and installing BOINC and attaching to the PrimeGrid project, participants can choose from a variety of prime forms to search. With a little patience, you may find a large or even record breaking prime and enter into Chris Caldwell's The Largest Known Primes Database as a Titan!”

You may now be thinking:”But, aren’t all primes… erm… prime?” Yes, but when you reach really large numbers, the technique of going through every possible factor of every possible number just takes too long, even for computers. Therefore, mathematicians use certain theorems that predict primes of certain forms. This cuts down the computational weight of each problem but lays open the possibility that a prime of a different form may be lurking somewhere between two known primes. Joining one of these search projects is not just about letting your computer run a bit of software in the background, but to also learn something about how prime numbers are really discovered. 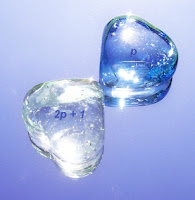 As a fortuitous example, the PrimeGrid is running a special Valentine’s Day search program to find primes that have been lovingly named after Sophie-Marie Germain, an 18th century French mathematician. A prime p is classified as a Sophie Germain prime if the number 2p+1 is also prime. For example, 11 is a Sophie Germain prime because so is 2x11+1=23. But, as has been said above, as the numbers get ever bigger so the computing time required gets ever longer. This is where you and your computer come into play. The Sophie Germain Valentine’s Day Prime Challenge starts at 10:00 UTC.

So, whether you join GIMPS or PrimeGrid or spend time with your loved one, have a Prime Valentine’s Day!
Florilegium
More Articles All Articles
About