Richard Mankiewicz
Quantum mechanics has been around for a hundred years and continues to fascinate and astonish scientists. It has been phenomenally successful at explaining the microscopic universe at the level of atoms and elementary particles and yet classical mechanics has survived to model the macroscopic world of everyday objects. But at what level do these two theories meet? Is there a region in which they could overlap; that is, can macroscopic objects display quantum behaviour?

Anybody who has had more than a cursory look at quantum mechanics will have come across the correspondence principle, which states that as a system becomes larger it tends towards classical behaviour. Put another way, the quantum numbers in a macroscopic system, say, a ball swinging on a chain, are so large that the energy differences between them are far too small to be measurable. It thus appears that the ball swings in a smooth arc rather than jumping between discrete levels. But how small does this ball, or oscillator, need to be before it starts to exhibit quantum mechanical behaviour? The physicists at the Cleland Group are trying to find out. "Researchers at UC Santa Barbara have provided the first clear demonstration that the theory of quantum mechanics applies to the mechanical motion of an object large enough to be seen by the naked eye. Their work satisfies a longstanding goal among physicists.

In a paper published in the March 17 issue of the advance online journal Nature, Aaron O'Connell, a doctoral student in physics, and John Martinis and Andrew Cleland, professors of physics, describe the first demonstration of a mechanical resonator that has been cooled to the quantum ground state, the lowest level of vibration allowed by quantum mechanics. With the mechanical resonator as close as possible to being perfectly still, they added a single quantum of energy to the resonator using a quantum bit (qubit) to produce the excitation. The resonator responded precisely as predicted by the theory of quantum mechanics.

"This is an important validation of quantum theory, as well as a significant step forward for nanomechanics research," said Cleland. 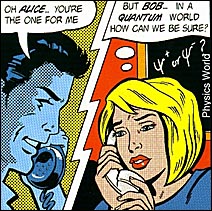 The researchers reached the ground state by designing and constructing a microwave-frequency mechanical resonator that operates similarly to – but at a higher frequency than – the mechanical resonators found in many cellular telephones. They wired the resonator to an electronic device developed for quantum computation, a superconducting qubit, and cooled the integrated device to temperatures near absolute zero. Using the qubit as a quantum thermometer, the researchers demonstrated that the mechanical resonator contained no extra vibrations. In other words, it had been cooled to its quantum ground state.

In a related experiment, they placed the mechanical resonator in a quantum superposition, a state in which it simultaneously had zero and one quantum of excitation. This is the energetic equivalent of an object being in two places at the same time. The researchers showed that the resonator again behaved as expected by quantum theory." [UCSB] You can also hear a brief interview with Andrew Cleland at NPR.

Gives a new meaning to the term quantum mechanical model.