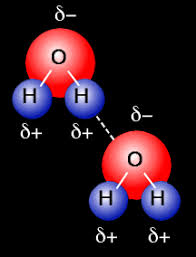 A video posted on A Blog Around the Clock a few days ago discusses the mechanisms behind hydrogen bonding. The first half of the video is visually basic -- simple diagrams to illustrate the points in the narrator's lesson -- and includes things like different colors for different atoms, and star shapes that appear where a bond forms.

Because the video is simple, I focused a lot on the audio, which included words like "electropositive," "electronegative" and "polar bonds." To help illustrate these terms, the second half of the video provides a great analogy: dogs.

If you recall my original AW post, I argued that a good analogy won't compare apples to oranges, in this case a chemical bond to a living thing (which I guess, at some level, is just a mega-scale compilation of a bazillion chemical bonds). But this analogy works because it clearly defines the relationship between the two concepts being compared. (If you haven't already, go watch the video.)

One end of the dog is like the positive atom in a chemical bond, and the other end is like the negative atom. And, like polarized molecules, opposite ends of the dogs attract one another (don't worry, totally G-rated). These attractions can be broken relatively easy, and re-established at any time under the right conditions.

This analogy gets a thumbs-up from me because 1) it explains the how the original concept works and gets the point across; and 2) is simple enough for someone with almost no science background (especially kids!) to understand, despite complicated words like "electronegative."

Disclaimer: Some comments below the video point out some errors in the scientific descriptions. I don't have a degree in chemistry, so I can't speak to that. The purpose of this post and of Analogy Watch in general is to highlight creative ways to explain science.
In Futuro
More Articles All Articles
About

A globetrotting science writer interested in the coolest things you've never heard of. I have a B.S. in Physics from Syracuse University and an M...