Last week, the National Institute of Environmental Health Sciences (NIEHS) in Research Triangle Park, North Carolina held a meeting to discuss the results of a 30-million-dollar federal study designed to assess the safety of bisphenol A, or BPA. The study, CLARITY-BPA, has been a collaboration between two camps - scientists and regulatory experts at the FDA, on the one hand, and academic scientists, who are funded by the NIEHS, on the other - that have long been at odds over the safety of BPA.

BPA has been used for over 50 years in the epoxy resin linings of food containers (to prevent spoilage) and is also used in polycarbonate plastic bottles and in many other products.  Some have expressed concern about BPA leaching out of food containers and packaging, but careful studies show that actual exposure from food is very low. urthermore, as a result of state-of-the art studies by scientists at the FDA and elsewhere, we know that virtually all BPA ingested is rapidly metabolized and excreted in the urine and does not enter the blood.  This is true even in infants.

Health agencies, including the FDA, the European Food Safety Authority, and Health Canada, have reviewed the scientific evidence and have concluded that BPA is safe at levels to which people can be exposed.  (For a detailed account of BPA and the endocrine disruption hypothesis, see Chapter 5 “Hormonal Confusion” in Getting Risk Right: Understanding the Science of Elusive Health Risks.)

However, this view is contested by academic epidemiologists who point to a variety of findings that, in their view, suggest that at low doses the compound can have adverse effects ranging from effects on sexual and neurobehavioral development to cancer.

The CLARITY study was conceived with the aim of reconciling the conflicting viewpoints.

The centerpiece of the study is a two-year “chronic exposure” study in which 3,500 rats were exposed to a wide range of BPA doses.  FDA researchers performed extensive pathological evaluation to detect effects on organ structure and function, sexual development, and evidence of cancer. In addition, 13 projects from academic grantees were added on to the main study to test specific hypotheses.

Major strengths of the study were that 1) both components of the study involved identical BPA exposure conditions, which were overseen at the same facility in the FDA’s National Center for Toxicological Research (NCTR), and 2) grantees received blinded Core Study samples, meaning they did not know whether samples had been dosed with BPA or how much, to minimize the potential for bias.

The core study was conducted from 2012 to 2013, and grantees received their tissue samples in 2013 and 2014. Thus, the data have been available for analysis for 4 years.  In spite of this, some of the grantees still haven’t published their results. 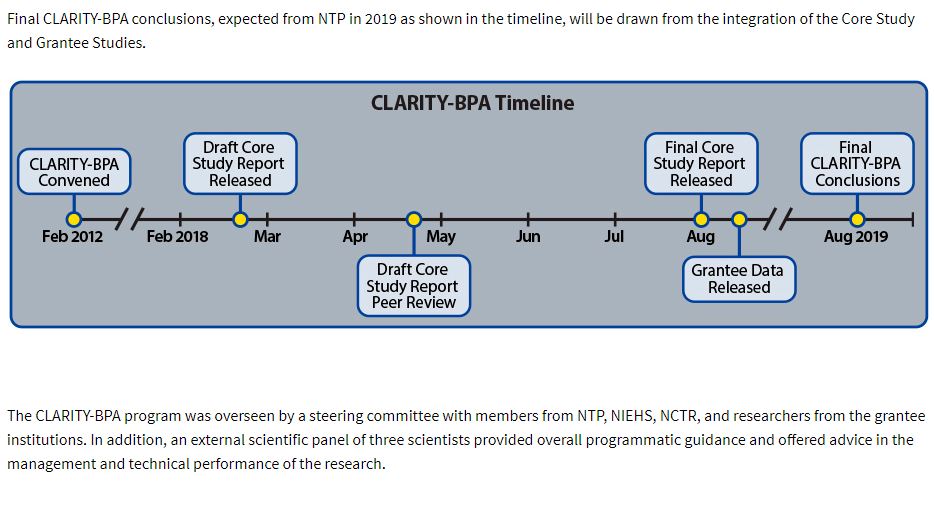 This past February dissension between the two camps emerged when FDA Commissioner Scott Gottlieb and deputy commissioner Stephen Ostroff issued a statement based on the not-yet-peer reviewed results of the core study that “FDA continues to conclude that BPA is safe for its currently authorized uses.”

Academic researchers, including some CLARITY grantees, criticized the FDA’s press release as premature and incomplete, charging that the agency was ignoring substantial evidence from animal studies documenting adverse effects of BPA exposure.

At last week’s meeting, interested parties had the opportunity to comment on the 200-page draft report summarizing the results of the core study. A number of academic grantees criticized certain technical aspects of the study, including the route of administration and use of “historical” control animals in certain analyses.  Such criticisms, coming 5 years after the completion of the study, do not bode well for the prospects of reaching a meeting of the minds.

The uneasy collaboration between the two camps points up the vast gulf between regulatory scientists who have relied on widely-accepted guidelines for conducting and reporting toxicological testing endorsed by the Organization for Economic Cooperation and Development (OECD) and academic scientists who believe that the use of the latest cutting-edge methods, such as gene expression, can detect subtle effects that are missed by the older approach.

The problem is that results of exploratory academic research are often difficult to interpret and their relevance to human exposure is unclear.  Many results have not been replicated.  One critic of this body of research on BPA characterized it to me as, “a land of one-sided comparisons, confirmation bias, post-hoc reasoning, ‘any finding at any dose’ effects untethered from matters of precursor lesions, internal dosimetry, and mechanism.”

We know that many published research findings are wrong, and this is particularly true of studies examining the effects of low-level physical/chemical environmental exposures.  However, regardless of their quality, published findings suggesting that a trace exposure may pose a risk to the general population can be counted on to receive inordinate attention from the media and the public and to feed demands for stricter regulation.

Given the enormous gulf separating the two parties to the CLARITY-BPA study, it is going to be fascinating and instructive to see further reactions to the finalized core study, slated to be released this August, as well as to the final grantee data to be released soon after.  It’s anyone’s guess how the collaborators will arrive at the “final joint conclusions,” which are scheduled for release in August of 2019.

Geoffrey Kabat is a cancer epidemiologist at the Albert Einstein College of Medicine and the author, most recently, of Getting Risk Right: Understanding the Science of Elusive Health Risks.  He is on the Board of Scientific Advisors for the American Council on Science and Health.

Geoffrey Kabat is an epidemiologist and author, most recently, of Getting...