Johannes Koelman
You have decided to start a graduate study in physics. Where should you apply? And how to decide which offer to take?

A diarrhea of lists attempt to rank "the world’s best universities". Mostly these lists are based on some aggregate of different metrics. Yet, for a postgraduate degree your focus should be on one and only one metric: you want to surround yourself with the best brains. If you're good, the place to hone your skills is there where you get the opportunity to learn from the best. There where you can join those that are making impact in their field of research.

What are the high-impact universities in physics?

It turns out that the various lists published on the internet (see here, here, and here) are largely useless in answering this question. Not only do they dilute the research impact metric with much less relevant inputs, also they often fail to distinguish between scientific disciplines. Yet, it’s no secret that some places are much stronger in one area of science than others.

A Metric For Excellence

A recent German-Swiss-Spanish study published on Arxiv offers an undiluted view on the places to be (and places to avoid) in the various disciplines. The preprint you may want to read for understanding of the detailed methodology. More interesting than the details in the paper, is the online ranking tool the authors have released. This tool allows you for the scientific discipline of interest to you, to lists the top universities and also to display them geographically.

Playing with this tool and zooming in on the scientific discipline 'physics and astronomy', the results on display show a global academic landscape in physics marked by stark contrasts in researching quality.

However, before I highlight these findings, let's first ensure we understand the metric deployed. The site uses a straightforward measure of scientific excellence for a university in a specified field of research: the percentage of their scientific papers in this field of research that are among the top ten percent most highly cited. If more than ten percent of the institution’s papers are in this high impact category, the papers from this institute are measured to have above average impact, if less than ten percent are in this category, the papers have sub-average impact.

Any metric on quality of research provides at best a proxy measurement. However, by focusing solely on highly cited publications, the metric deployed in the tool successfully zooms in on quality rather than quantity. As such this metric for institutes follows the same philosophy as the E-index (Einstein index) metric for individual researchers.

Now the results. As mentioned, I focus solely on the discipline 'Physics and Astronomy'. I also exclude non-university institutes. If you are considering where to start a Post-graduate study, it is no use for you yo know that 30.9% of the physics and astronomy papers from the Institute for Advanced Study in Princeton are amongst the top 10% highest cited papers. You can't go there for an advanced degree, and you rather want to know which location for graduate study gives you the highest chance to ever make it to the IAS.

So which university achieves worldwide the highest impact in physics?

What do you think? One of the US East Coast Ivy League universities? Good guess, 25.7% of their papers in physics fall in the top-10% high impact category. Those institutes truly are centers of excellence in physics, with University of Pennsylvania reaching a worldwide runner-up score of 27.9% of their papers reaching high-impact status. Yet, runner up is not the top spot.

Hang on, MIT is not in the Ivy League, so is it them perhaps? Nope. MIT scores a respectable 26.9%, but that brings them no higher than the no 6 spot worldwide.

So the number one must be a West Coast institute then? Indeed, the various Californian universities score very high with UCSB (27.4%) and Stanford (27.6%) heading the list. That gives them a number 5 and a number 3 spot. Again not enough. 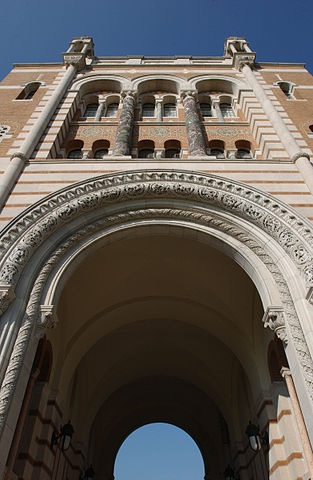 The university highest scoring in impact in physics is to be sought in the US, but not at the East Coast and neither at the West Coast. Deep south in Houston, Texas we find Rice University. Rice physicists witness 29.4% of their papers entering the top-10% category. An astonishing score. And Rice's top-impact score is certainly not limited to physics. Rice also reaches the number one spot worldwide in engineering, in material science, and in chemistry. Still there is a considerable variance with other departments. For instance, Rice scores a number 16 spot in mathematics and a number 40 spot in biochemistry and molecular biology.

Places To Be, Places To Avoid


While the list of top institutes is interesting in itself, what makes it really worthwhile is the dynamic range exhibited by the rate of high-impact publications. The variation in percentage of publications making it to the high-impact category is enormous. Stating that universities in the top of the list outperform those at the bottom by a considerable margin is quite an understatement. A physics paper from Rice has 14 times higher chance of reaching a high-impact citation score compared to a physics paper from Ondokuz Mayis University in Turkey. We are not talking subtle differences here! Moreover, the data is truncated to institutes that over the period under investigation have generated at least 500 publications in the field of research being considered. Postulating many low impact universities amongst the group not making the volume threshold is not a very audacious move. In any case, the full dynamic range can only be larger than a factor of 14.

I don't want to turn this blog post in a name-and-shame list of physics departments, so don't expect from me a list of universities with lowest impact in physics. However, I am most happy to provide you with full data down to the bottom of the list, by aggregating the data to nation-wide levels. This will reveal geographical trends containing some stark truths.

To lump the data, for each country considered, I simply count the number of universities in three categories:

1) Centers of Excellence (COE) in Physics: institutes with more than 15% of their papers in physics reaching a top 10% status in number of citations

2) Centers of Mediocrity (COM) in Physics: institutes with at least 7.5% but no more than 15% of their papers in physics reaching a top 10% status in number of citations

3) Centers of Insignificance (COI) in Physics: institutes with less than 7.5% of their papers in physics reaching a top 10% status in number of citations 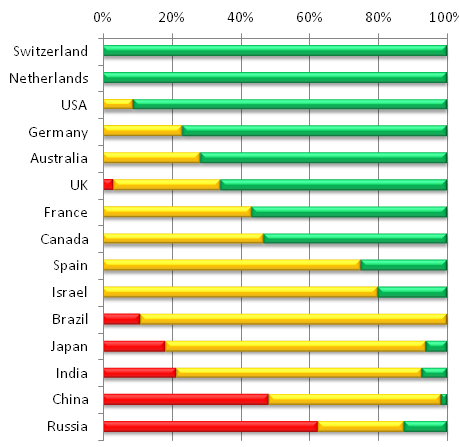 The above figure shows the percentage of institutes within a country in each of the categories: green - centers of excellence, yellow - centers of mediocrity, red - centers of insignificance.

The above plot could not have been more polarized in terms of East vs West contrast. Although many western countries have a majority of their institutes in the center of excellence category, Japan, India, China, and also Russia harbor very, very few centers of excellence in physics. Furthermore, a large percentage of the institutes in China (48%) and Russia (63%) are classified as centers of insignificance, while this category is virtually absent in Western countries. Frankly, I had anticipated to see a clear contrast, but didn't expect the contrast to be that large.