Johannes Koelman
A shooting star brighter than the sun on the very day an asteroid flyby is predicted. A most remarkable coincidence. And to add to our amazement, the rock whizzing through the skies didn't illuminate a distant ocean or some remote desert, but rather showed its spectacle above one of the very few areas in the world populated by people driving dashcams around 24 hrs a day. No screenwriter would get away with such an unlikely scenario.

But how likely are meteor event like the one in Russia? What are the chances a similar event will occur this century? And what about even bigger events? What was the power of the blast from the Russian meteor? How does it compare to the explosions we humans create?

The physics of meteor air bursts is straightforward. Meteors enter earth's atmosphere at velocities centered around 20 km/s (12 mi/s). As the kinetic energy carried by a massive object scales with the square of the velocity, meteors are objects densely packed with energy waiting to be released. A quick calculation shows that every kilogram of rock entering at about 20 km/s carries the explosive energy of 50 kilograms of TNT. The meteor that exploded over the region of Chelyabinsk, was approximately 17 meters (55 ft) across and weighted some 10,000 metric tonnes. That corresponds to an energy release of 50 times 10,000 ton or 500 kiloton of TNT, which is 30 times the energy released by the nuclear bomb on Hiroshima.

These are shocking figures, and it seems amazing that no more than two cases of serious injuries have been reported. The key point to note is that for the Hiroshima bomb an air burst 600 m (1,900 feet) above the ground was chosen to achieve maximum blast effects at ground level. Nature isn't anywhere that mean, and the Russian meteor air burst occurred at an altitude of about 40 km (25 mi). Explosions at such altitudes spread their shockwave out over a much larger ground area at correspondingly weaker intensities. The abundance of dashcam footage of the Chelyabinsk event has made us all familiar with the typical effects to be expected at sea level from a '30 Hiroshimas' event in the upper atmosphere.

What more does our universe have in store? Can we expect even bigger events during our lifetime?

The energy content of asteroids impacting earth follows a spectacular power-law distribution over an amazingly wide range. A 2002 article in Nature combines data from many different sources and specifies that over an energy range of up to a million times Hiroshima the annual frequency of meteor events exceeding an energy E measured in "Hiroshimas" is given by

So one should expect an explosive event exceeding 'one Hiroshima' on average once every 3 years. And an event at least as strong as last week's Chelyabinsk airblast (30 Hiroshimas) will occur with a frequency of roughly once every 65 years. As no '30+ Hiroshimas' event has been reported since 1908, one could declare last week's event 'long overdue'.

What about even stronger events? Doing the math, the power law relation leads to the frequency distribution described in below table. 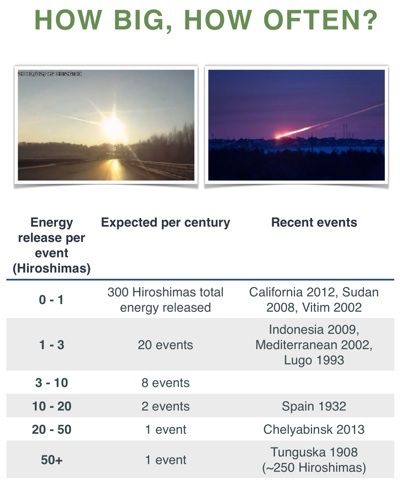 The first thing to note is that, contrary to reports in the popular media, the energy scale of the Russian event does not represent the much discussed 'once in a century event'. That title goes to events at a scale of 50+ Hiroshimas. We haven't seen such an event since 1908.

Many people seem amazed that astronomers specialized in NEO (near earth object) tracking could not give an early warning of a '30 Hiroshimas' event. Fact is giving a one day warning for a 17 m object approaching earth at 20 km/s requires spotting an object at a distance of 100,000,000 times its size. That equates to spotting a 1 mm grain of sand at 100 km distance. No easy task. Larger (typically 100+ m diameter) near earth objects (NEOs) are actively being monitored, but even that effort is far from complete.

Russia's deputy prime minister Dmitry Rogozin has called for international efforts to develop a system to intercept shooting stars. This call falls straight in the category knee-jerk reactions. You might not like it, but we probably have to live with the threat of a '30 Hiroshimas shooting star' occurring once in a human lifetime somewhere in earth's upper atmosphere. The good news is that such events tend to give a few minute warning prior to the airblast arriving at ground level, and that future victims of multi-Hiroshima shooting stars have had exposure to some relevant video footage. When a star brighter than the sun shoots far above my head, I surely will avoid the vicinity of any windows or other vulnerable structures for at least the next few minutes.
The hammock physicist
More Articles All Articles
About